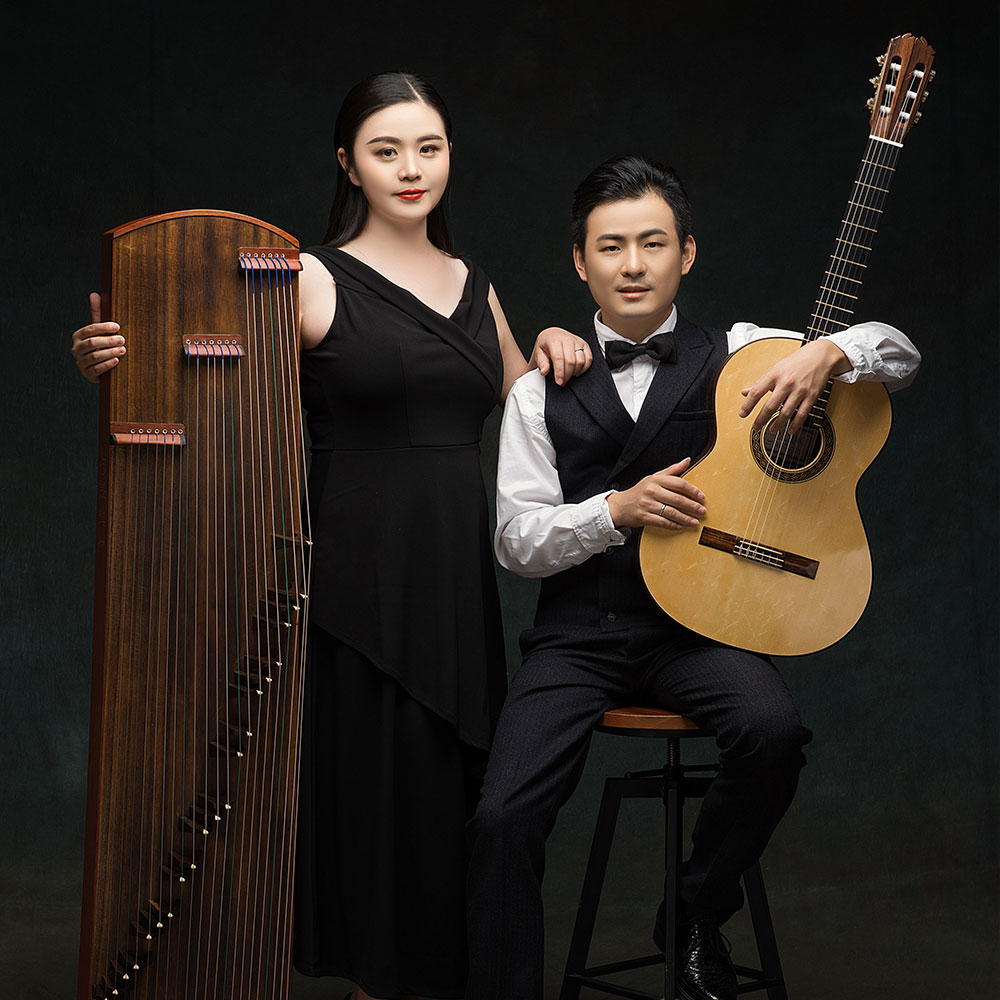 Founded in 2016, Duo Chinoiserie is a unique pairing that combines the Chinese guzheng and the European classical guitar. This duo reproduces the elegance of the Chinoiserie style and brings the best of Eastern and Western culture together through music. Its bold and carefully handpicked selection of repertoire explores the instruments’ dialogue and complementary textures while uniting contrasting musical styles into a cohesive, well-defined one.

Duo Chinoiserie has performed in Spain, China, and the United States. Their performances have been described as sensational by audiences and critics alike, and their creative artistic activities have been featured by mainstream media outlets including the Arizona Daily Star and Tucson Lifestyle Magazine.

A member of the Chinese Musicians Association, Jing Xia is a guzheng performer and Chinese music scholar. She holds a Master of Arts degree from the China Conservatory of Music and is currently pursuing her Ph.D. in Applied Intercultural Arts Research at the University of Arizona. Her studies focus on social issues and promotion of human wellbeing through applied musical research.

As a performing artist, Xia was awarded China’s most prestigious musical award, the Golden Bell Award, and the Master of Chinese Traditional Musical Instrument by the California State Senate. She has toured in Switzerland, New Zealand, Spain, Malaysia, Bangladesh, Japan, South Korea, and the United States.

Aside from her devotion to the culture of traditional music, Xia is also enthusiastic about exploring new music, techniques, idioms, sounds, genres, cultures, and other aspects of musical perception. Her performing style of the guzheng is calm and subtle, yet very powerful and emotional. She pursues the true nature of music and makes her listeners feel the beauty of heaven and earth, love of life, and the light of humanity.

Bin Hu has performed in Austria, China, Denmark, Estonia, Finland, Indonesia, Italy, Malaysia, the Philippines, Spain, and the United States as a soloist, chamber musician, and soloist with orchestra. Among the works he has premiered, one of the highlights of his career includes a world premiere of a guitar concerto composed by Jorge Rodriguez-Caballero with the Pärnu City Orchestra in Estonia.

Winning the first prize of the 2016 David Russell Bach Prize, a competition judged solely by GRAMMY Award-winner David Russell, has earned Hu a reputation as a Bach interpreter. As scholar and educator, Hu has been invited to conservatories and conferences in China and South American countries to present a variety of topics on Baroque performance practices on guitar. Moreover, his all-Bach CD, Ciaccona, produced by Eudora Records in Spain, has received critical acclaim worldwide.

Hu’s undergraduate studies were with Heiki Mätlik at the Estonian Academy of Music and Theatre in Tallinn, Estonia. He then moved to Salzburg, Austria to study with Marco Tamayo at the Universität Mozarteum and earned his Master of Arts degree with distinction. He currently holds a Doctor of Musical Arts degree from the University of Arizona and was part of the studio of Professor Thomas Patterson. Hu plays a guitar made by Stephan Connor on this recording. 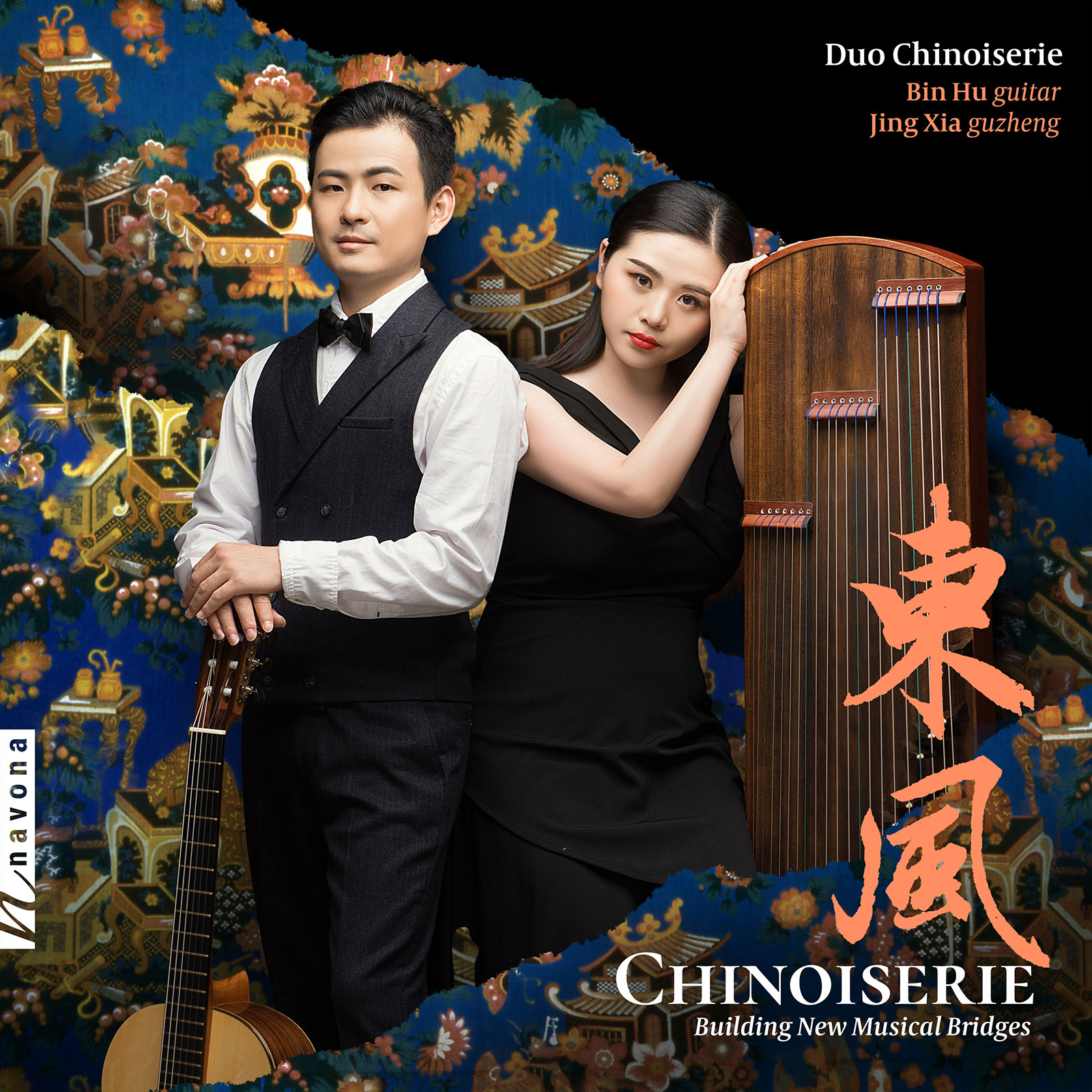 Release Date: April 8, 2022
Catalog Number: NV6417
21st Century
Chamber
East Asian
Guitar
A true melding of Eastern and Western cultures, Duo Chinoiserie’s CHINOISERIE combines the Chinese guzheng and European classical guitar to create an inspired new canon of classical repertoire. A bold and carefully handpicked selection of compositions—including new arrangements of Granados, de Falla, and Debussy alongside a transcription of Goss and new works by Assad, Duplessy, and Nakanishi—explores the instruments’ dialogue and complementary textures while uniting contrasting musical styles into a cohesive, well-defined whole. As the guzheng’s crisp, plucky clarity interplays with the guitar’s chords, even the most well-known classical pieces become fresh and energized, born anew with a unique and visionary sound.
Discover