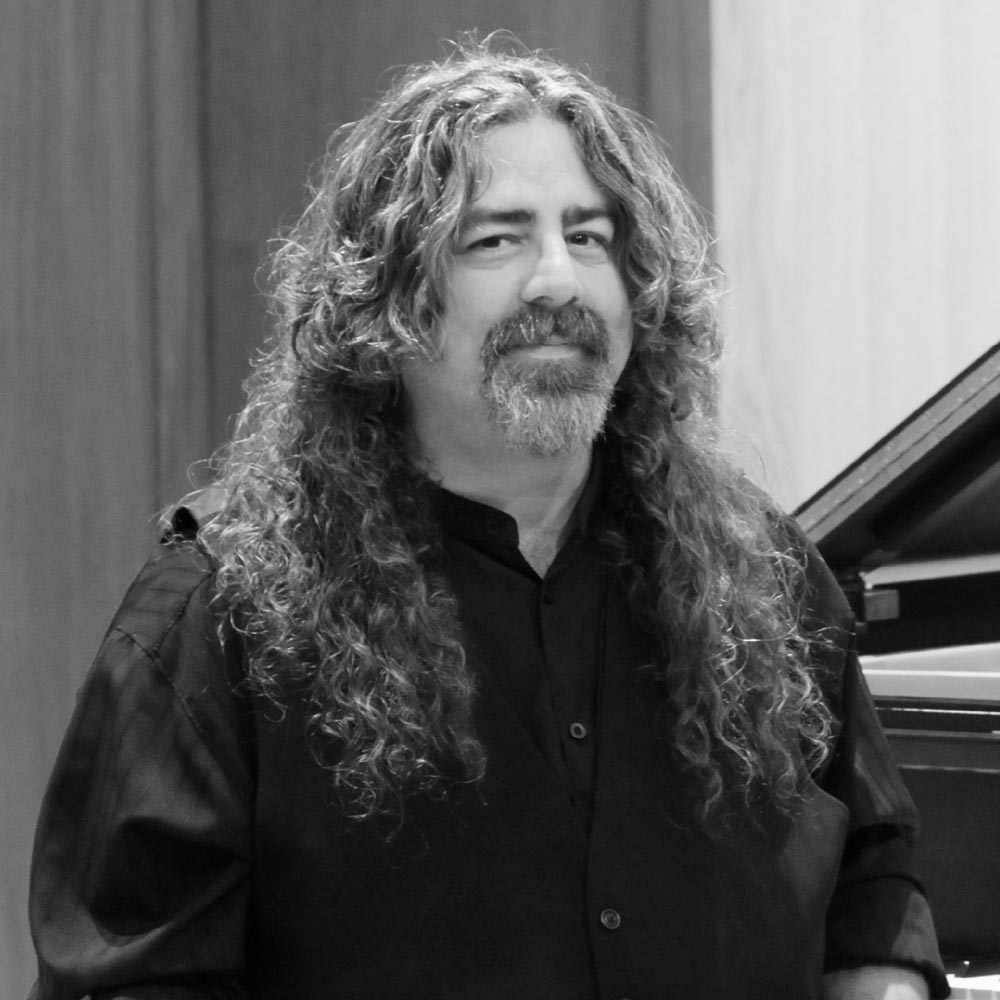 Frank Felice (b. 1961) is an eclectic composer who writes with a postmodern mischievousness: each piece speaks in its own language, and his works can be by turns comedic/ironic, simple/complex, subtle/startling, or humble/reverent. Recent projects of Felice’s have taken a turn toward the sweeter side, exploring a consonant adiatonicism.

His music has been performed extensively in the United States as well as garnering performances in Brazil, Argentina, Japan, China, Greece, Italy, the United Kingdom, the Russian Federation, Austria, the Philippines, the Czech Republic, and Hungary. His commissions have included funding from the National Endowment for the Arts, the Omaha Symphony, Classical Music Indy, the Indiana Arts Commission, The Indiana Repertory Theatre, Dance Kaleidoscope, Music Teachers National Association, the Wyoming State Arts Board, the Indianapolis Youth Symphony, Kappa Kappa Psi/Tau Beta Sigma, as well as many private commissions. His 2020 release of a recording of chamber music and strings titled Reflections and Whimsies was released on Enharmonic Records and features performances by the Indianapolis Quartet, bassist David Murray, soprano Estelí Gomez, and violinist Davis Brooks. Other recordings are featured on Spotify, Apple Music, Soundcloud, Ravello Records (Sidewalk Music), and DB Records. Scores and other performance materials can be obtained from Mad Italian Bros. Ink Publishing.

Felice began his musical studies in Hamilton MT, singing, playing piano, guitar, and double bass. His interest in composition began through participation in a number of rock bands, one of which, Graffiti, toured the western United States and the Far East in 1986-1987. He attended Concordia College in Moorhead MN, the University of Colorado, and Butler University, studying with Michael Schelle, Daniel Breedon, Luiz Gonzalez, and James Day. He completed his Ph.D. with Dominick Argento, Alex Lubet, Lloyd Ultan, and Judith Lang Zaimont at the University of Minnesota in Minneapolis in 1998. Felice continues to perform as a bassist/guitarist with a number of central Indiana jazz and rock groups, and he currently teaches as an associate professor of composition, theory, and electronic music in the School of Music, Jordan College of Fine Arts at Butler University in Indianapolis IN.

He is a member of the Society for Electro-Acoustic Music in the United States, the American Composers Forum, the American Music Center, The Society of Composers Inc., and the Christian Fellowship of Art Music Composers.  Residencies and guest artist appearances include those with the Composers Institute, the TEDx Hieronymus Park, the Wyoming Arts Council, the Banff Centre for the Arts, and a number of mini-residencies in universities and high schools throughout the west and midwest. In addition to musical interests, he pursues his creative muse through painting, poetry, cooking, home brewing, paleontology, theology, philosophy, and basketball. He is very fortunate to be married to mezzo-soprano Mitzi Westra. 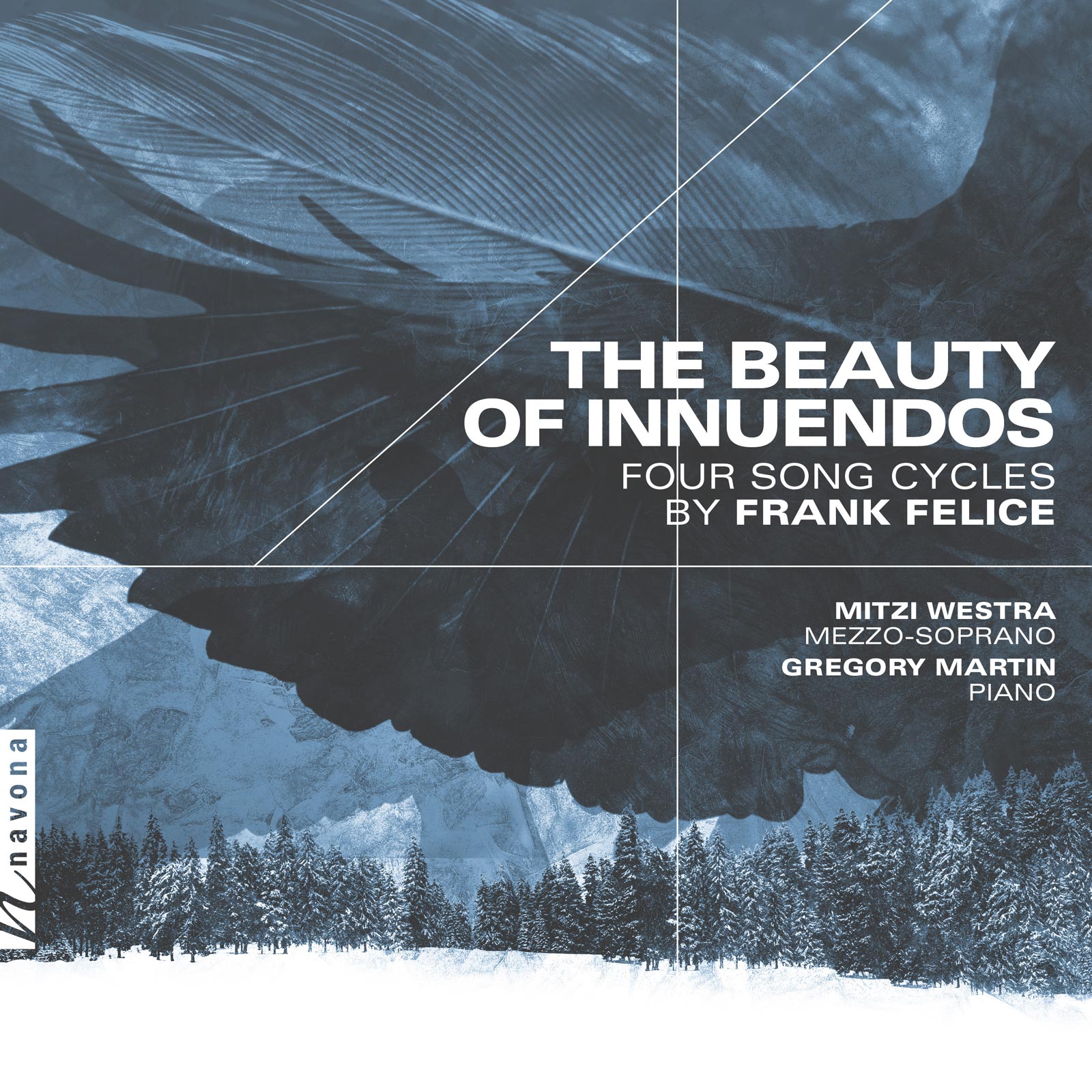 The Beauty of Innuendos

Release Date: January 27, 2023
Catalog Number: NV6488
21st Century
Chamber
Vocal Music
Piano
Voice
Frank Felice, an eclectic composer celebrated for his postmodern mischievousness, explores his own brand of “consonant adiatonicism” in THE BEAUTY OF INNUENDOS. Throughout the album, Felice sets a variety of texts to music, ranging from the antiphons of 9th century Christian mystic Hildegard of Bingen to the modernist poetry of Wallace Stevens. Felice’s compositions explore the given text while also demonstrating the virtuosic skill of the singer and the pianist; the latter, far from a mere accompaniment, joins with the voices equally to lend even great profundity to the poetic text. Featured in these recordings is mezzo-soprano Mitzi Westra, who commissioned two of the works. Above all, THE BEAUTY OF INNUENDOS solidifies Felice’s reputation as a dauntless and innovative composer.
Discover