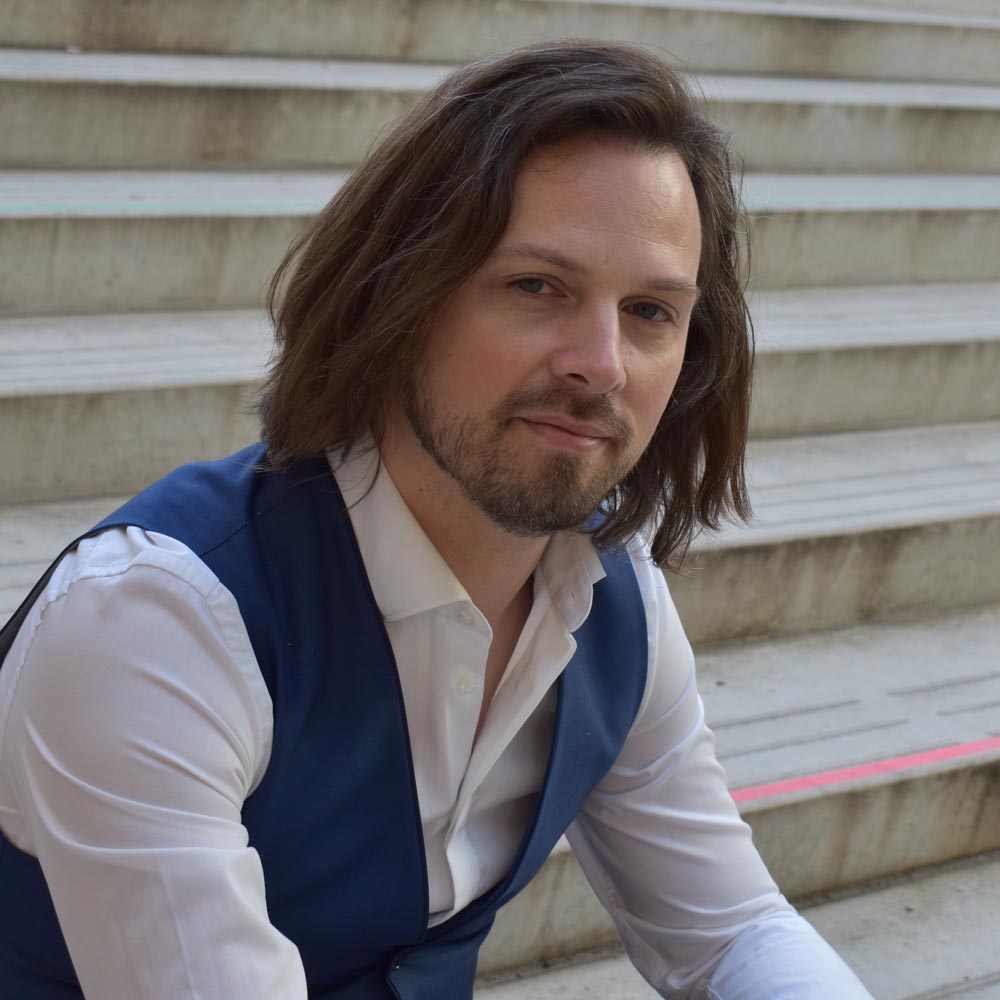 Unifying principles of jazz and classical in his work, Dutch composer Jesse Passenier explores the peripheries of genres and the depth and possibilities of harmony. He is the winner of the Dutch Rogier van Otterloo Award 2017, acknowledging his success in bringing together musical genres, leading his own orchestra, and writing for orchestra. Passenier is co-founder and artistic director of Fluid Foundation. Having established himself as a composer, he musically developed in a broader sense as an arranger, conductor, drummer, pianist, and vibraphonist.

Highlights of the 2021-2022 season include Passenier’s third solo concerto, titled Concerto for Bass Trombone and Orchestra Life Cycles, which premiered in spring 2022, and among other venues was performed in the Concertgebouw in Amsterdam. In 2020, Passenier took further steps in his efforts to unify the jazz and classical tradition, by writing his first two concertos Piano Concerto No. 1 Levensdrift, and Vibraphone & Marimba Orchestra No. 1 Becoming the Colour. Both works were written for jazz soloist and symphony orchestra. They were recorded with ADDA·Simfònica, led by its chief conductor, maestro Josep Vicent, featuring Kari Ikonen and Vincent Houdijk.

After building a solid bond with November Music Festival (NL), the 2019 festival featured Passenier in a significant role. Division for orchestra, solo baritone, and choir deserves a special mention. The piece was dedicated to 75 years of freedom in Den Bosch and was presented as the opening concert of the festival. 2019 was equally pivotal for his development in the realm of jazz music, where he was sharing the stage with the famous WDR Big Band in collaboration with ESA (European Space Agency). As the composer of two commissioned works, arranger, and bandleader he conducted the interactive performance in the Cologne Philharmonic Hall. As the leader of his own Fluid Orchestra, the publication of his debut album Lit Scenes in 2018 was the turning point in finding his own musical language.

Constantly on the lookout for special collaborations, Passenier has worked with international and Dutch artists and ensembles such as Kurt Elling, Vince Mendoza, Quincy Jones, Jacob Collier, Jörg Achim Keller, Jules Buckley, Reinier Baas, Eric Vloeimans, Morris Kliphuis, Ruben Hein, Janne Schra, Dudok Quartet Amsterdam, and Van Amsterdam Duo. Leading organizations such as the Metropole Orchestra, The Heritage Orchestra, the Royal Band of the Dutch Navy, the Dutch Wind Ensemble, the South Netherlands Philharmonic, Holland Opera, and the WDR Big Band are some of the art institutions that regularly have commissioned works by his hand.

He holds the position of Main Subject Teacher Jazz Composing and Arranging, Jazz Master Coordinator, and Artistic Director of Fringe Orchestra at Conservatorium Maastricht. Since 2021, all of Passenier’s new compositions have been published by Donemus Publishing. 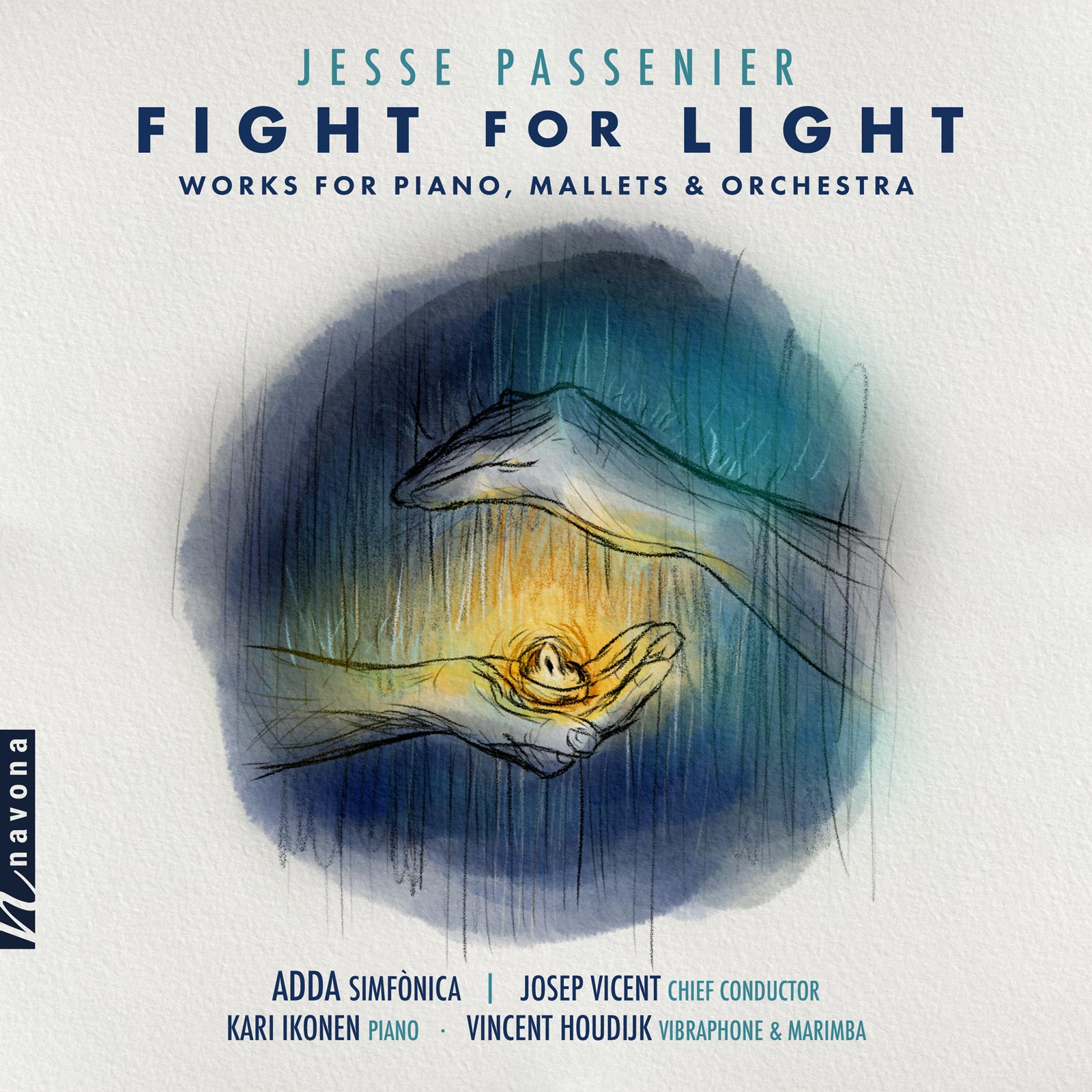 Release Date: October 28, 2022
Catalog Number: NV6459
21st Century
Concertos
Orchestra
Percussion
Piano
On FIGHT FOR LIGHT, Dutch composer Jesse Passenier explores the peripheries of jazz and classical, marrying the two genres together through symphonic music. The music presents a struggle for strength, goodness, and clarity, in which moments for great energy and urgency give way to quiet purity. Containing three works by Passenier: Piano Concerto No. 1 "Levensdrift” (a Dutch word meaning “the primal urge to live”); Vibraphone & Marimba Concerto No. 1 "Becoming the Colour"; and Duo for Vibraphone & Piano “Unraveling Confusion,” these pieces taken together as a whole reveal Passenier’s breadth as a composer, offering a musical commentary on the realities we face in today’s society.
Discover