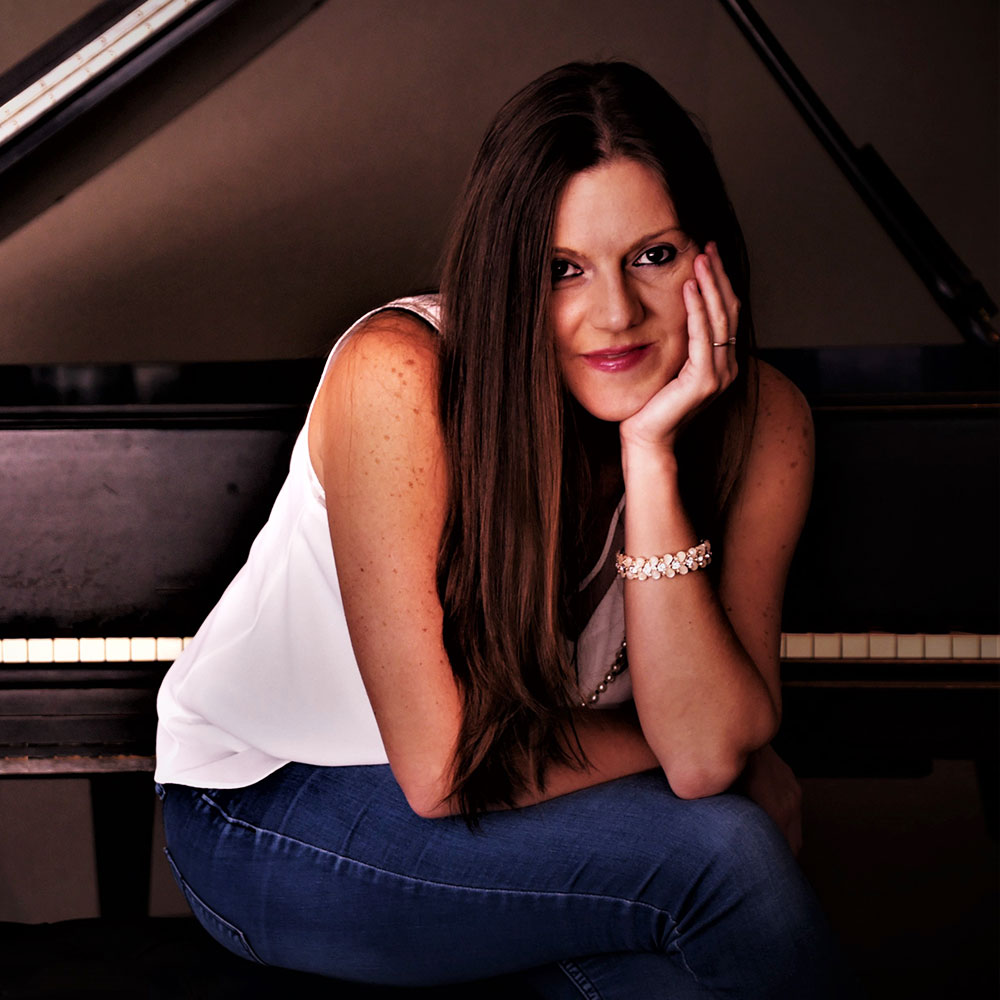 North Macedonian pianist and composer Natasha Stojanovska has received numerous prestigious prizes and honors, including the American Prize. Having left her native country to continue her education in the United States, she was selected to be a member of the studios of Roberta Rust at Lynn University’s Conservatory of Music and Alexander Toradze at Indiana University. Stojanovska continued on to pursue a Doctorate of Musical Arts at the Bienen School of Music at Northwestern University with James Giles.

Some of Stojanovska’s most recent achievements include solo piano recitals at the Dame Myra Hess Memorial concerts, broadcasted by the WFMT Radio Station and the Henry Fogel Presents Concert Series, both in Illinois. She joined Kosmologia Project and performed a solo piano recital accompanied by art videos at The Princeton Summer Festival and The Ear Taxi Festival. During her studies at Northwestern University, she proudly represented the Bienen School of Music at the Gilmore Piano Festival.

Stojanovska has performed solo and chamber music recitals in esteemed concert halls around the world. Her own works have been performed at major festivals and venues in Europe, Australia, Canada, and the United States. Distinctive and exuberant, her compositional voice is deeply multicultural, with roots in folklore—fresh yet familiar—using sonorities close to those heard in Eastern European music. It also incorporates folk elements and ideas unique to her native country. Stojanovska strives to bring the rich tradition of Macedonian musical culture into the mainstream of world music, and to explore the depths of her own emotions. Her works include pieces for solo instrumental, vocal, and chamber music ensembles.

She began composing at the age of 8 and gave her first public solo recital when she was 10. At the age of 9, she wrote her first piano work, Candles Suite. Her compositions have been performed at numerous festivals including Days of Macedonian Music in Skopje; “he New Music Festival in Florida; and Music Across the Atlantic with the ensemble Concet/21. A truly multicultural composer, she writes music that combines folklore with extensive classical training, conveyed in her lively compositional voice.

This release is largely inspired by her mentor and friend, Carmen-Helena Téllez, who produced this recording. Stojanovska’s passion and dedication to the music of Eastern Europe has been clear in her career as a performer for the past 20 years. Very recently, she realized it was important to record repertoire that, up to this point, had been undervalued. Women composers from Eastern Europe, over the course of history, have lived and worked alongside male composers who have received wider recognition. She realized people tend to compare their music to male composers from their cultural region, such as Maria Szymanowska and Frederic Chopin, or Zara Levina and Sergei Rachmaninoff. However, to name one example, Chopin was in fact inspired by Maria Szymanowska. With this album Stojanovska wishes to showcase the originality and maturity of this extraordinary repertoire, raising awareness and appreciation towards pieces that deserve to be included in standard piano repertoire.

Stojanovska has just completed her Doctorate Degree at Northwestern University. She is currently the founder of Stojanovska Studios while maintaining an active performing career. 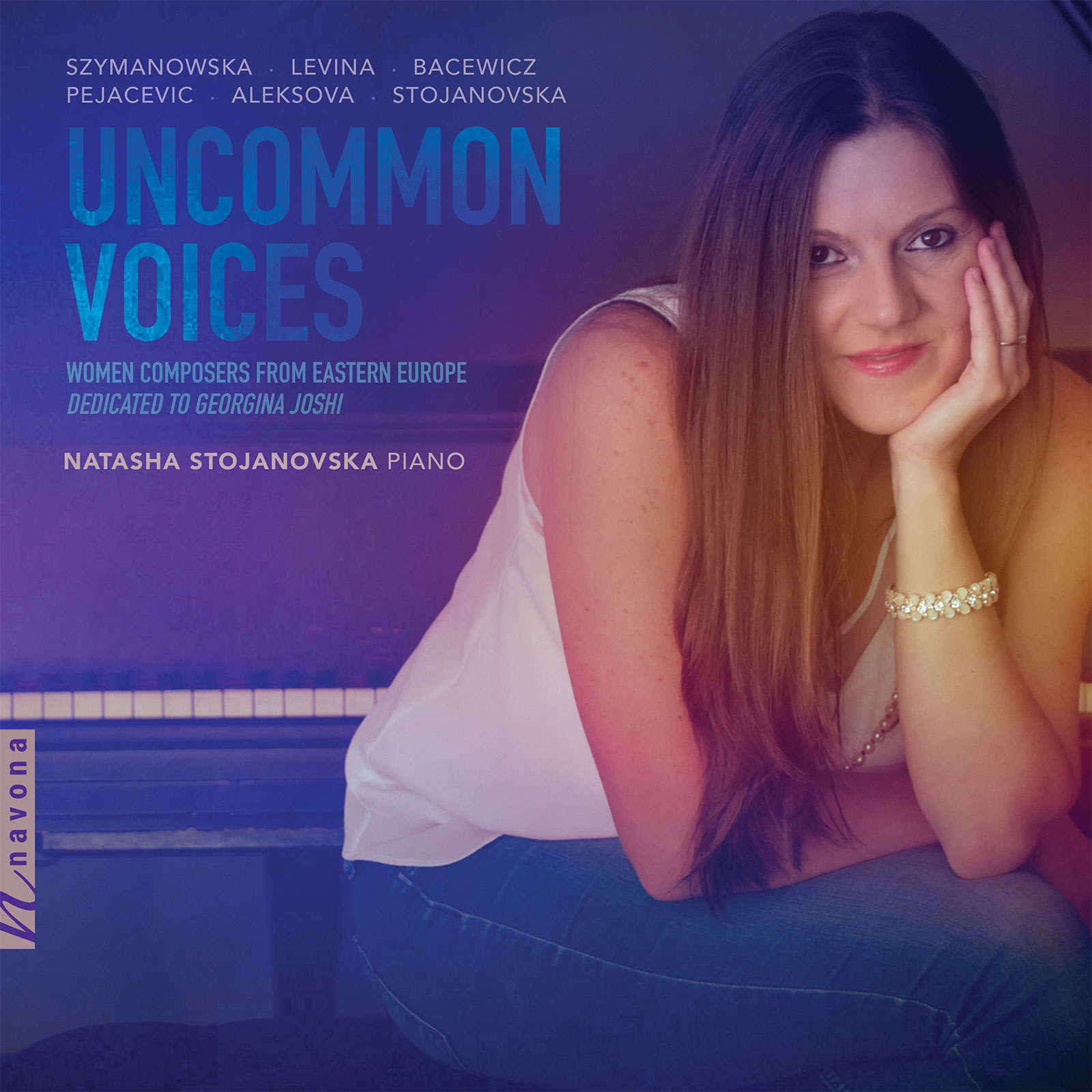 Release Date: July 22, 2022
Catalog Number: NV6440
21st Century
Solo Instrumental
Piano
UNCOMMON VOICES from Natasha Stojanovska explores the music of female composers from Eastern Europe. This collections of piano works includes the music of Croatia, North Macedonia, the former Soviet Union, and other Eastern European countries, combined with elements of the western musical tradition. The album includes two of Stojanovska’s compositions, Phantasy No. 1 and Phantasy No. 2. The former borrows metrical patterns found in Macedonian folk music; along with elements of tonality and atonality, the piece examines the uncertain boundary between the Macedonian and American cultures. The album also features the works of contemporary composers like Bojana Petrovic Aleksova, as well as historical composers like Maria Szymanowska. Stojanovska is especially proud to bring the music of Szymanowska to the attention of modern listeners; while Szymanowska’s music is not performed as often today, her compositions—including the enchanting Nocturne in B-flat major—likely inspired Frederic Chopin. UNCOMMON VOICES offers a long overdue celebration of female composers from Eastern Europe, as interpreted by the capable hands of Natasha Stojanovska.
Discover