Peter Dickson Lopez (b. 1950), an internationally performed composer, traces his musical roots to a broad range of composers and influences originating from his tenure as a graduate student at the University of California at Berkeley and as a Tanglewood Fellowship Composer.

The eclectic nature of Lopez’s mature style stems no doubt from having worked directly with composers of diverse approaches and philosophies during his early years at Berkeley and Tanglewood: with Joaquin Nin-Culmell, Andrew Imbrie, Edwin Dugger, Olly Wilson, and Earle Brown at UC Berkeley (1972-1978); and with Ralph Shapey and Theodore Antoniou during his Fellowship at Tanglewood (1979).

Lopez began studying piano at the age of six. His passion for composition emerged early when as a child he began to write pieces emulating the style of Bach whom he was studying at the time. For Lopez, performance and composition merged into one as he continued his studies in piano and composition in college. Indeed, this view of performance and composition was echoed by Ralph Shapey with whom Lopez worked as a fellowship composer at Tanglewood: Composition Is Performance On Paper! No doubt due to this enduring philosophy, Lopez’s compositions were recognized early in his career with a number of prizes and awards including the George Ladd Prix de Paris and the Lili Boulanger Memorial Prize, among others.

By the mid 1980’s, Lopez had already received numerous awards, performances in Poland and the Netherlands, a release of The Ship of Death on the 1750 Arch Records label, and recognition in academic and professional communities. Sadly, just at the beginning of his career and having achieved so much, Lopez was forced to retire early from composition due to emerging long-term health and medical concerns of his wife, Irene, and other personal considerations. Knowing how much he must be absorbed in composition to create, Lopez suspended his life’s work at that time. It wasn’t until 2010 that the vicissitudes of life once again allowed Lopez to resume composing.

Lopez is equally comfortable with experimental instrumental techniques (IFASIA for octet), electronics (Moment Pieces for Extended Piano), digital techniques (MISE-EN, Series I), electroacoustics (The Ship of Death for Male Voice, Chamber Orchestra and Live Electronics) and traditional methodologies (Visions des reflets et nocturnes for Piano and String Orchestra, Song of Thirteen Moons for Orchestra). During his residency in Paris (1976-1978), Lopez had the opportunity to hear in concert the music of Xenakis, Messiaen, Boulez, Berio, Stockhausen, and many other European composers, often with those legendary composers in attendance. The influence of this experience on Lopez’s composition of The Ship of Death, which he wrote during his Paris years, is unmistakable.

World premieres of works written after 2010 have been performed by the Sydney Contemporary Orchestra in Sydney, Australia (2017, 2018), and the Ensemble MISE-EN (November, 2018) in Seoul, South Korea. Lopez’s post-2010 projects span a range of media including orchestral, piano, instrumental, chamber, choral, electroacoustic, analog, digital, and virtual www.peterdicksonlopez.com 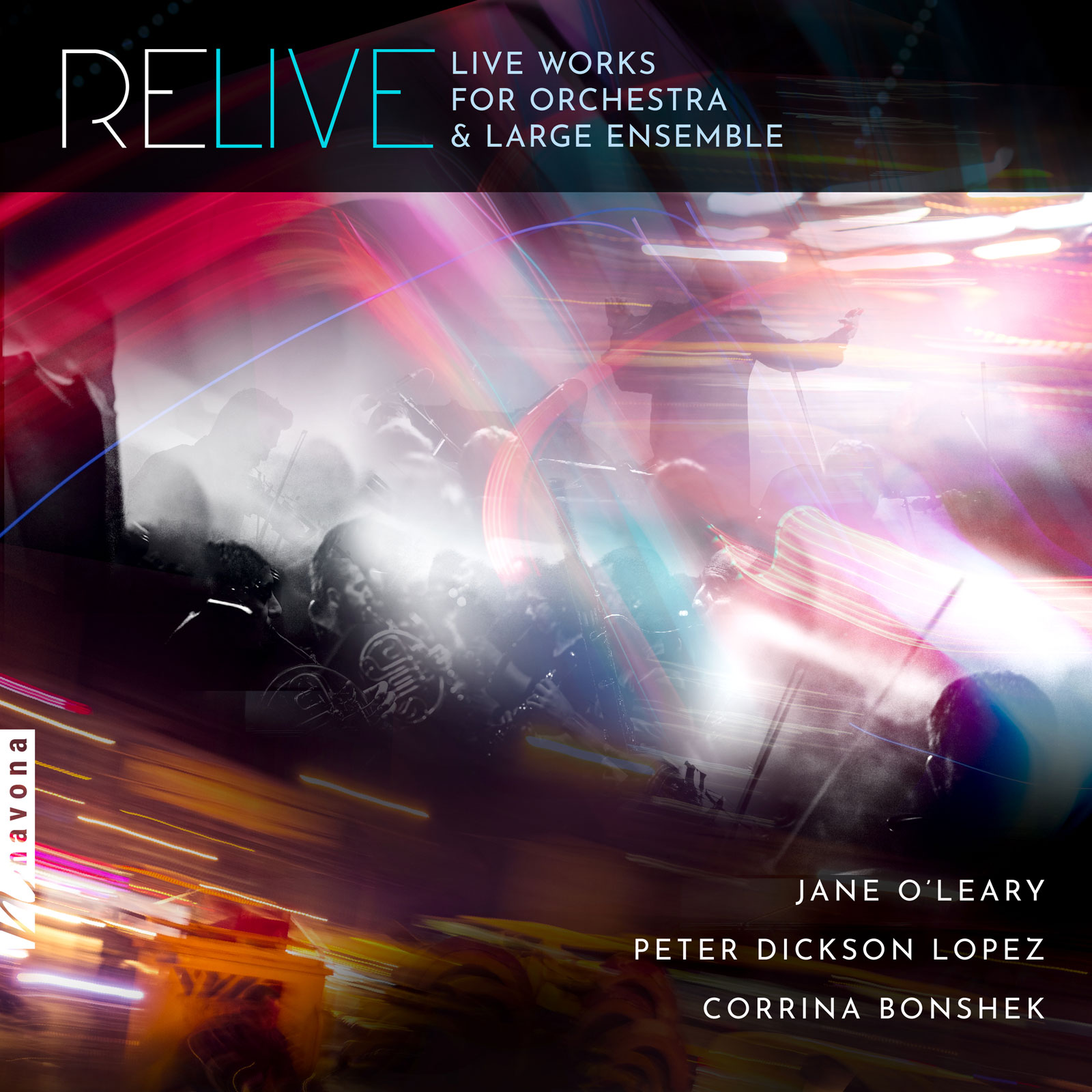 Release Date: February 5, 2021
Catalog Number: NV6334
21st Century
Orchestral
Orchestra
RELIVE, from Navona Live features live performances of the music of three composers from around the world. This latest edition of the Navona Live series is inspired by an eclectic blend of world topics, literature,  landscapes, and seascapes. Corrina Bonshek’s Dreams of the Earth is a reworking of a large scale piece for string and percussion inspired by the sight of a swirling flock of birds amidst the backdrop of climate change.
Discover