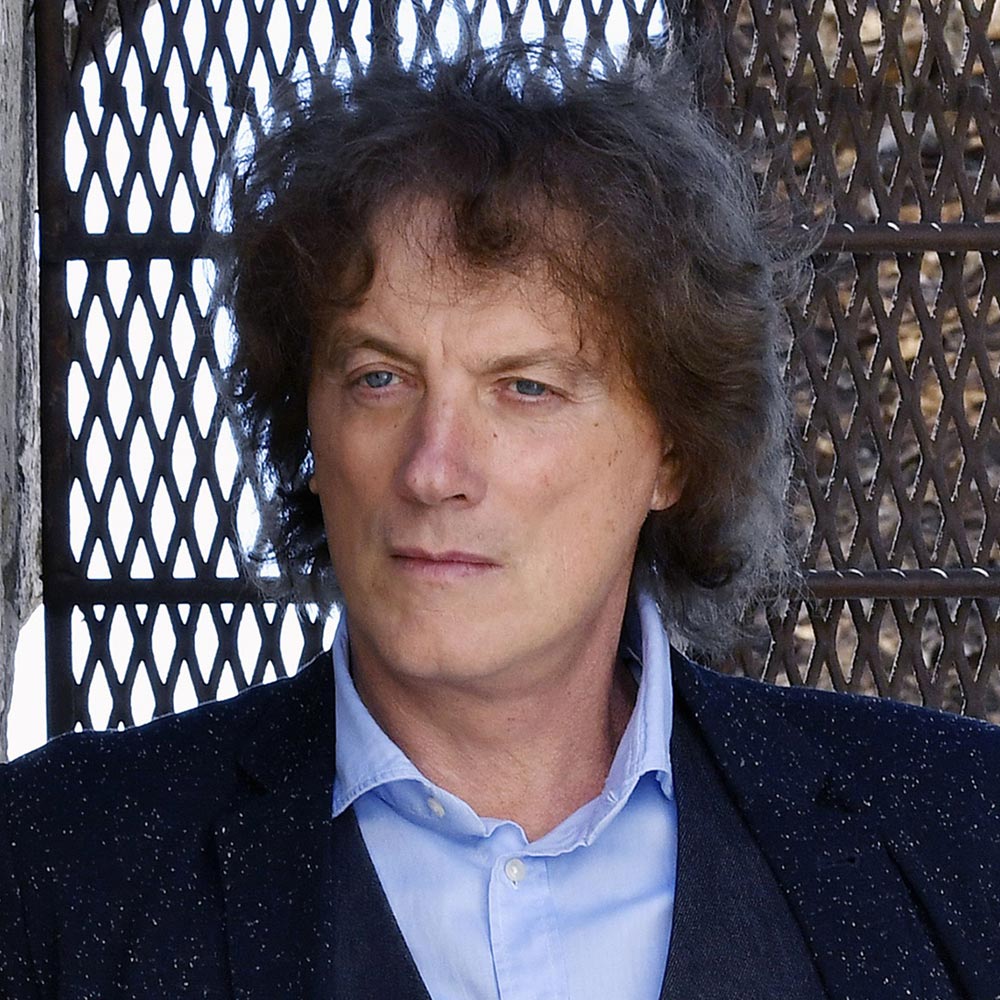 Tonči Huljić / tɔn-tʃi hulj-itʃ / is the most awarded and best-selling Croatian musician, composer, and record producer.

The Mediterranean atmosphere and the various cultural and musical influences of the former Yugoslavia have left an indelible mark on the structure of the melody, score-writing, and production solutions. In the 1980s, together with his decade-older colleagues, Huljić founded the pop band Magazin which earned him numerous releases and years-long tours across the former Yugoslav republics. He managed to align his melody with the broad ethnicity of the region and audiences alike. It is this talent for assimilation and openness that would ultimately prove to be vital for his success in the world market, where he would later begin his work as a composer — by affirming his musical style, which often saw the infusion of classical music.

In the 1990s, Huljić shifted his focus more intensely on compositions, writing, and creating careers for numerous performers. Highly successful releases and the popularity of performers who followed his unique pop-folk sound led to him being officially recognized as the best-selling composer of the last decade of the 20th century. This, however, was not well received by critics, who believed that his style of blending music and business led to profit more so than to art.

During that time, he founded his own record label, Tonika Records, which to this day protects the composition and legal rights of its founder and the songwriters and performers that are part of the label.

His four-time participation at the Eurovision Song Contest marked the beginning of his international success in composition. His songs were a blend of classical music, folk, and pop – Nostalgija, Strings of My Heart, Lijepa Tena, and especially Marija Magdalena, which was in a way robbed of victory and almost disqualified in the 1999 contest.

Huljić’s career path shows that his style has not gone unnoticed. In 1999, he was contacted by Mel Bush, a British producer and manager who was behind the success of a great number of world-renowned rock and pop artists from Britain (Led Zeppelin, David Bowie, Queen, A-Ha, Vanessa Mae, etc.). Together, they set up the HUSH Music Foundation in London. Their first successful project was Bond, a crossover female string quartet that has notched up success worldwide.

His next big crossover project was with pianist Maksim Mrvica, who has gained overwhelming popularity throughout Asia. Through the HUSH trust fund and Universal and EMI distribution companies, the two have realized 9 projects, amassing multi-million releases and sold-out tours.

Huljić is currently holding concerts together with his orchestra, Madre Badessa Classic, which is accompanied by a philharmonic or symphonic orchestra in the countries where they perform. Currently, he is in the process of completing the crossover album entitled Mediteraneo, which features some of the world’s most famous instrumentalists (Víctor Espínola on the harp, V. M. Bhatt, Grammy Award-winning performer on the Mohan Veena) and the Budapest Philharmonic Orchestra.

The essence of Huljić’s music is eclecticism — the Western melodic style fused with the rich instrumentalism of the Mediterranean and the world that results in a completely new spirit.

In 2009, he released Waterland, an instrumental album. The solo album Waterland recorded with instrumentalists includes tracks which were otherwise arranged by numerous performers elsewhere. Some compositions of the album were featured in TV series and movies.

In 2011 he founded a band called Madre Badessa. Featuring Petar Grašo, the band and Huljić released their first album entitled Ka hashish. The 2014 album Panika was promoted by the accompanying documentary Tonči Huljić: Tonetov život ili Bog, lavur, iće i piće, which propagates the album’s philosophy. Tonči Huljić & Madre Badessa included musical compositions lasting as long as pop songs but containing atypical lyrics. Namely, songs were performed in languages of the 19th century spoken by the residents of Split. The diction was a mixture of influences by all nations and cultures that had governed the city, mainly Italian (50%) because Dalmatia used to be under the authority of the Venetian Republic for a long time. The Italian language is followed by the Turkish language (25%) because of the legacy Turkey had left on the history of Split. In fact, the daughter of Suleiman the Magnificent was buried in Solin. We also hear French (5%) because, at the beginning of the 19th century, Split was governed by Marshal of the Empire, Auguste de Marmont. The compositions also include traces of German and other languages and dialects. The end of 2017 saw the release of the double album Tipo primitivo / Piano primitivo.

The world’s first pop mass, Misa Mediterana, saw the light of day in the summer of 2021 in Split.

Huljić professes his love for music by writing for musicals. The end of 2016 saw the release of Patients, his first musical, whose libretto was written by world-famous Croatian writer Miro Gavran, and directed by Igor Barberić. The musical’s immense success is reflected in the fact that it was sold out a month before it premiered, as were 10 performances at the Vatroslav Lisinski Concert Hall, one of the central cultural venues of the country.

His recent musicals include Žuta Minuta (The Yellow Minute), where he directed the music along with his children, and where his spouse Vjekoslava acted as a lyricist. The libretto was written by Igor Weidlich and Igor Barberić.

The musical has become the genre of Huljić’s ever-greater interest. Currently, he is involved in several new projects.

With his distinct music, appearance, and performance, particularly of Croatian Rhapsody — believed by many to be a traditional Chinese song — Mrvica has made 15 tours in China, performing both concert halls and stadium venues.

The life and work of Huljić inspired a famous British writer to, upon hearing Child in Paradise, write a book in 2009 entitled Iconoclast Icon: A Story Inspired by the Life of Tonči Huljić.

In 2016, the Croatian Composers’ Society released a sheet music collection with 30 of his greatest-ever hits. His songs have been covered in various countries and two biographical films have been made as well. The music of Huljić can be found on two YouTube Music channels: Tonci Huljic & Madre Badessa and Tonika Records.

He gladly transfers his knowledge and skills onto others, appearing as a judge on talent shows Operacija trijumf (2008), X Factor Adria (2017), Nikad nije kasno (It’s Never Too Late), and Hrvatska traži zvijezdu (Croatia’s Got Talent, RTL, 2018-19).

His wife Vjekoslava also writes lyrics for many of his songs. His son Ivan and daughter Hana are into music as well. The best, it seems, is yet to come. 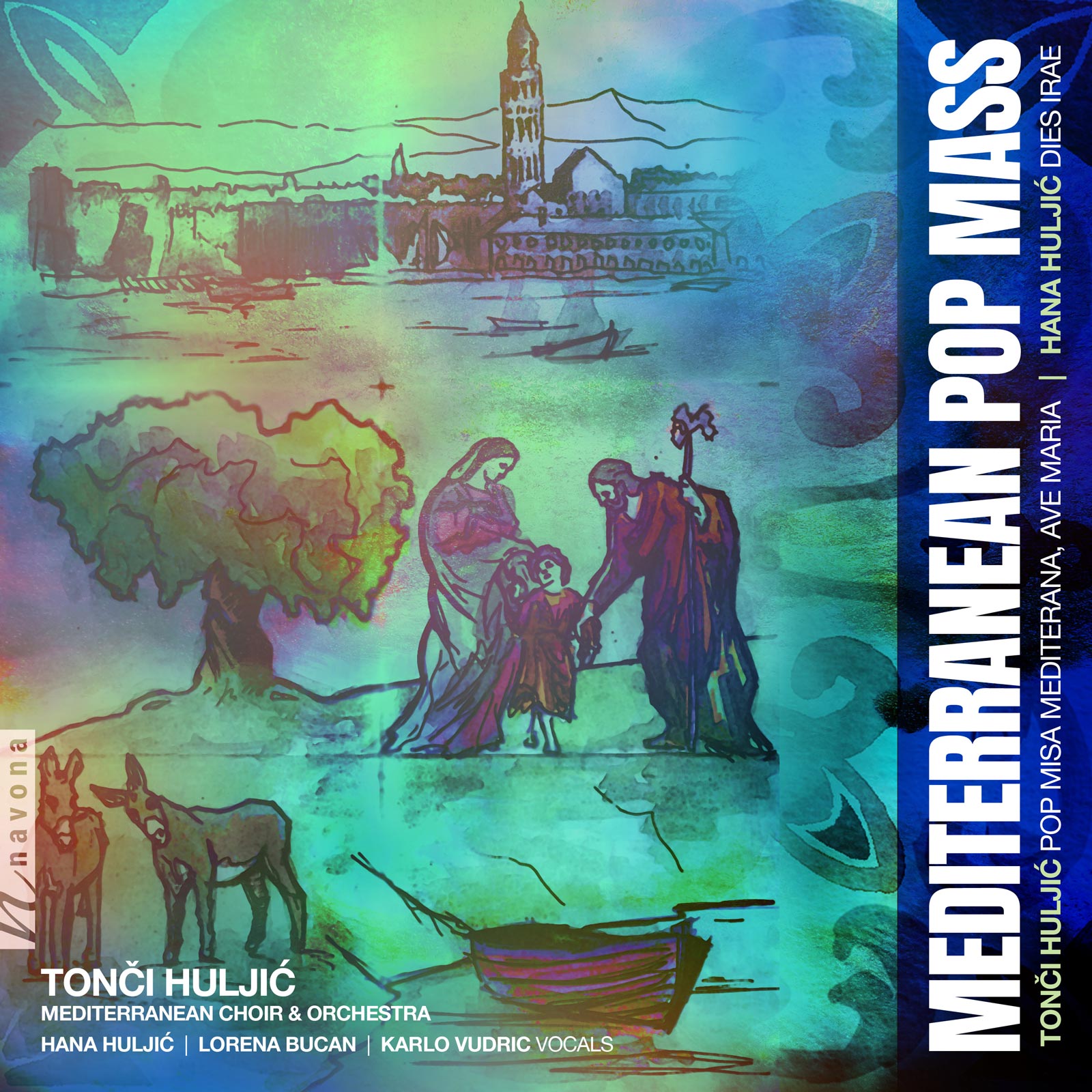 Release Date: November 11, 2022
Catalog Number: NV6473
21st Century
Liturgical
Vocal Music
Choir
Orchestra
The essence of Tonči Huljić’s music is eclecticism, his Western melodic style fused with the rich instrumentalism of the Mediterranean and the world resulting in a completely new spirit. This MEDITERRANEAN POP MASS, recorded in Split, Croatia, thoughtfully blends traditional orchestral and modern sounds in exciting ways, infusing iconic classical works with groove, reignited passion, and an appreciation of the conventions of today’s musical idioms. Featuring an orchestra, choir, modern rhythm section, and soloists Hana Huljic, Lorena Bucan, Karlo Vudric, Huljic conjures an atmosphere like no other in his compositions, a satisfying listening experience for anyone who appreciates where music has been, and where it is going.
Discover