An Opera In Two Acts

Chicago-based composer Ross Crean’s opera The Great God Pan soars in this new release, the first collaboration between the composer and PARMA recordings. The Great God Pan takes its story from an eponymous 1890 novella by Welsh author Arthur Machen, which explores themes of scientific hubris, transcendental medicine, and unexplainable supernatural behavior. Impressively, Crean adapted Machen’s narrative into the work’s libretto himself, an ambitious and rare undertaking for a composer. Crean’s familiarity with the story shows through in the emotional resonance of his music, which matches and communicates the character’s concerns and feelings with unflinching precision.

The key to Crean’s musical portrayal of the story is twofold. First, beginning with the overture, much of the opera’s accompanimental music is defined by pulsing ostinato ideas. This characteristic is inviting to the listener and draws us into the musical world of Crean’s opera. More importantly, the relentless quality of these rhythms wordlessly establishes the ominous mixture of tension and mystery at the heart of The Great God Pan’s narrative. Second, Crean’s text setting is extremely clear, so the story is conveyed with crystal clarity in this recording.

Without giving too much away, the tale at the heart of The Great God Pan begins with a surgery gone wrong. The first character we meet, Dr. Raymond, has invited the opera’s protagonist, Clarke, to witness an important experiment based in elements of non-traditional, ancient rituals. Dr. Raymond sacrifices his wife Mary as the subject of his attempt to access a higher spiritual plane – referred to as, “seeing the Great God Pan” – and unwittingly initiates a serious of mysterious supernatural occurrences that Clarke encounters over the next few decades.

This recording represents a chamber version of Crean’s opera that includes a full cast of ten superb vocalists and a pair accompanying pianos. The piano parts yearn to be orchestrated, and, in many moments, the listener can easily imagine the lush mixture of brass, strings, woodwinds, and percussion Crean will employ once he has the opportunity to fully orchestrate the piece. With this said, the performance on this album never neither feels incomplete, nor does it ever lack any intensity it might enjoy in a full production. This owes to the excellent quality of the album’s vocal performances, and to Crean’s ingenuity in composing the accompanying piano parts with the sounds of strumming and plucking, which combine to make the music that much more vibrant. 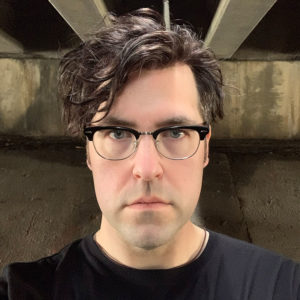 Rosśa Crean (they/them) jokingly says they “create music that they like to listen to when they are by themself, eating raw cookie dough in a dark closet,” but in truth, their music has been referred to as being “funny...and virtuosic” (Classic Concert Nova Scotia), having “exceptionally different, outstanding quality” (Download), and music that “stirs you deep, undertones of humanity” (Access Contemporary Music).