Around the world, millions of readers eagerly await the impending release of the new thriller ‘Origin’ by Dan Brown, the #1 New York Times bestselling author of ‘The Da Vinci Code.’ According to Brown, the initial spark of inspiration for his highly anticipated novel struck him when he first heard a provocative piece of classical music entitled Missa Charles Darwin — a piece composed by award-winning composer Gregory W. Brown, who also happens to be the author’s brother.  The composition is featured at a crucial moment in the ‘Origin’ narrative.

Missa Charles Darwin, was written for Grammy-nominated New York Polyphony and is structured on the standard liturgical Mass.  Brown painstakingly translated DNA sequences and markers into musical phrases set to texts by Charles Darwin.  In doing so, Brown simultaneously commemorates the scientist’s genius while interrogating the relationship between faith and reason.

“For some listeners Missa Charles Darwin might seem inherently subversive,” adds Gregory W. Brown, “but that can be part of the conversation. It doesn’t take anything away from religion to also celebrate Charles Darwin.”

Dan Brown notes, “I’ve always been fascinated by the interplay between science and religion; ‘Missa Charles Darwin’ is an ingenious fusion of the two, and it immediately captivated me. Missa Charles Darwin got me thinking about evolutionary processes, spiritual views, and the origins of our species and our belief systems.”

Recorded September 30, and October 1, 2013 at American Academy of Arts and Letters in New York NY 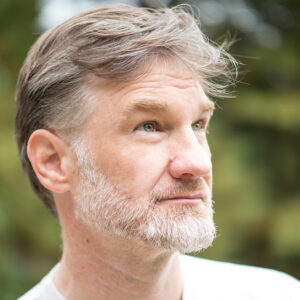 Composer Gregory W. Brown’s works have been performed across the United States and Europe — most notably in Weill Hall at Carnegie Hall in New York City, Cadogan Hall in London, and the Kleine Zaal of the Concertgebouw in Amsterdam. His commissions for vocal ensemble New York Polyphony have been heard on American Public Media’s Performance Today, BBC Radio, Minnesota Public Radio, Kansas Public Radio, and Danish National Radio; his Missa Charles Darwin received its European debut in March 2013 at the Dinosaur Hall of Berlin’s Museum für Naturkunde. 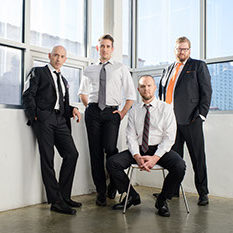 Praised for a “rich, natural sound that’s larger and more complex than the sum of its parts,” (National Public Radio) New York Polyphony is one of the foremost vocal chamber ensembles active today. The four men, “singers of superb musicianship and vocal allure,” (The New Yorker) give vibrant, modern voice to repertoire ranging from Gregorian chant to cutting-edge compositions.

Their dedication to innovative programming, as well as a focus on rare and rediscovered Renaissance and medieval works, has not only earned New York Polyphony two GRAMMY nominations and wide acclaim, but also helped to move early music into the classical mainstream.

Both in performance and on recording, New York Polyphony has demonstrated a commitment to presenting contemporary compositions that explore the boundaries between ancient and modern music. In January 2017, they premiered The Vespers Sequence, a multi-movement setting of the Byzantine evening prayer service composed for the ensemble by Ivan Moody. Other projects include The Bitter Good by American composer Gregory Spears, for which the quartet was awarded a 2016 Commissioning Grant from Chamber Music America.

I have always admired the way that Charles Darwin keenly observed the natural world and began to piece together the great puzzle of our geological and biological history. Instead of accepting commonly held contemporary beliefs about the workings of our planet, Darwin forged a new path. He recognized our interconnectedness, ultimately arriving at a greater understanding of the scale and scope of geological time. Honoring Darwin through music was a natural way for me to express this admiration.

Missa is the Latin form of the word “Mass” and refers to the texts and music of the Roman Catholic liturgy. This liturgy has an established structure and (in general terms) is associated with a public celebration of faith. Missa Charles Darwin retains the structure of the Mass, but substitutes sacred texts with the words of Charles Darwin, compiled and edited by New York Polyphony bass Craig Phillips. The musical and liturgical form of the Mass is distinct and canonic, with intrinsic proportions, structure, and drama. Casting Darwin’s texts into that form is a way of drawing parallels and exploring contrasts between the two. In the first movement, for instance, the central message of the “Kyrie” is one of supplication and mercy, while Darwin’s natural selection inherently lacks mercy.

In order to bind the work together I devised an opening idea linked to Darwin, evolution, and genetics. I translated a section of the genetic sequence from Platyspiza crassirostris (a bird from the group commonly known as Darwin’s Finches) into musical tones which create a simple melody. This tune serves as a motto of sorts for the Mass showing up here and there as generative (musical) material. Other ideas taken from genetics appear in the “Credo,” where mutation, insertion, and deletion are applied to the motto melody (along with standard musical procedures of inversion and retrograde) to create an evolving musical texture. Other underlying ideas in the work include symmetry, which is common to both science and music. A notable example of symmetry occurs in the “Gloria,” where the four voices sing the passage “different, yet dependent upon each other” in phrases that are graphical point-reflections of one another. The symmetry here serves to underline the interdependence of the voices, at the same time creating something of intricate beauty. It also takes advantage of the double meaning of the word “reflect.” Similarly, the “Sanctus” climaxes with a canon created from one simple melodic idea (“As buds give rise by birth to fresh buds...”) rendered into four closely related melodies. These ideas merge together, intertwining to form an interlocking texture grown from a single idea.

The genetic sequence that has (in various guises) served as a motto for the piece returns in the final movement in a slightly altered, yet recognizable, form as a bookend for the piece. The final “Amen” includes a fleeting and oblique quotation of the Latin “Ite, Missa est” in the midst of a reprise of the “Alleluia” that closes the second movement.

Since the premiere of Missa Charles Darwin at the Marine Biological Laboratory in Woods Hole, MA, in 2011, the piece has been performed numerous times throughout the United States and Europe, most notably in the dinosaur hall of Berlin’s Museum für Naturkunde. 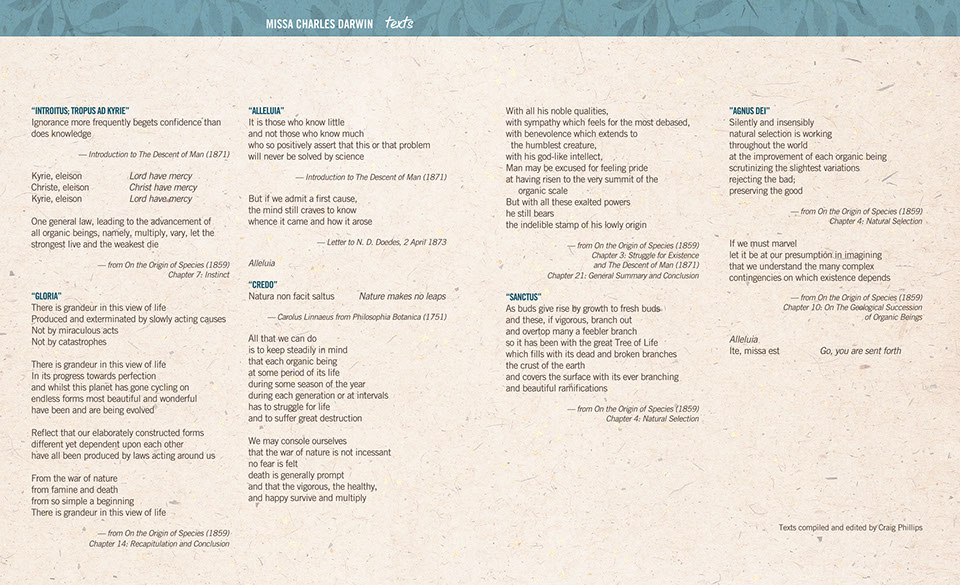