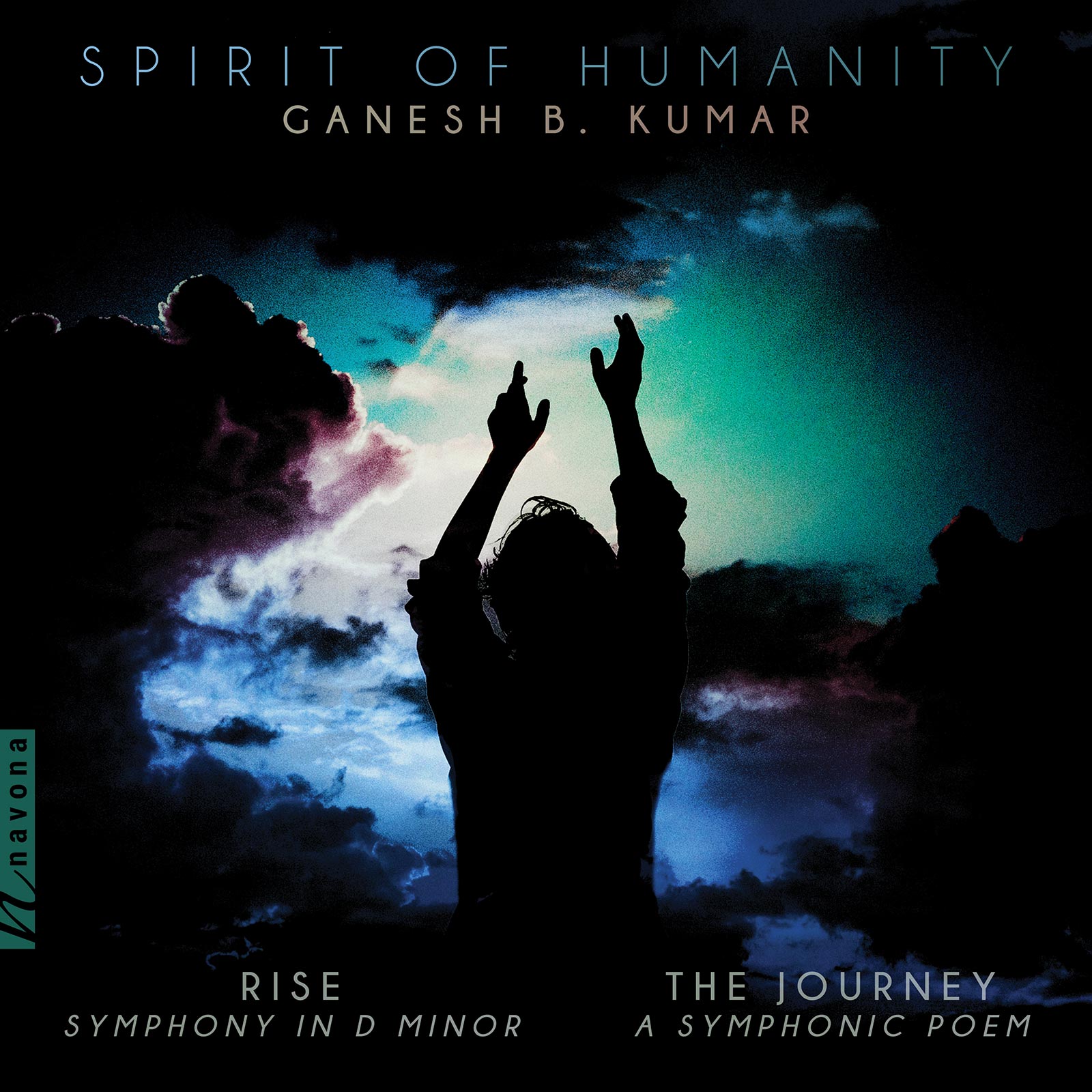 A historical feast awaits listeners on Ganesh Kumar's first NAVONA release SPIRIT OF HUMANITY. Half intended as an homage to Beethoven, half a musical portrayal of a little-known refugee crisis in World War II, it aims to be an epically emotional orchestral experience.

The distinctly Indian twist of SPIRIT OF HUMANITY is not only owed to Kumar's nationality, but also to the commissioner of the recorded works, the Dhahara Vidhya Foundation. Why Kumar would be asked to create Rise, a symphony inspired by Beethoven in time for the 250th birth anniversary of the great composer appears obvious. The piece draws heavily on Beethovian elements from the first measure to the last, and includes, among others, reminiscences of Beethoven's most popular themes, such as the opening motif of the composer's Fifth Symphony, but consciously introducing a rising figuration (as against the falling 3rds of the original) signifying positivity and perseverance.

Much less apparent, and thus perhaps more interesting, is the provenance of the other recorded work, The Journey – From Despair to Hope – A Symphonic Poem. This large piece of program music reminds the listener of the little-known, terrible hardships of Polish refugees in the early 1940's, when thousands of displaced Poles in Russia, owing to a great humanitarian act by Maharaj Jam Saheb Digvijay Singhji, embarked on an arduous journey to India, and found a new home in the then-princely Indian state of Nawanagar. Kumar's uncanny ability to paint the deprivation, depletion, and truculent perseverance of the refugees in stark tonal colors is nothing short of jaw-dropping; and the finale, an extolment of the Maharaj's generosity, vividly evokes satisfaction and relief in the face of suffering overcome. The symphonic poem makes a powerful case for pacifism on the 75th anniversary of the unconditional surrender of Nazi Germany, to the Allied forces in 1945, thereby ending World War II in Europe.

Finally, a bonus track rounds off the album with an a cappella Undaal Amma Ivvulagam in the Tamil language. This Indian ending is a fitting encore, considering that it is emotionally intense like the rest of SPIRIT OF HUMANITY – and, perhaps, like Ganesh Kumar himself.

"A spellbinding work of collaboration"

THE JOURNEY - FROM DESPAIR TO HOPE: A SYMPHONIC POEM
Homage to ‘Maharaj’ Jam Saheb Digvijay Singhji

I. THE NIGHT BEFORE THE JOURNEY: ARIA I - LOST SOULS
Lyrics by Georgina Margarite Ezra

I have no words to describe the depth of gratitude I feel for our patron Mr. Anand Madhavan, for his magnanimous generosity and unconditional support in realizing this musical venture. 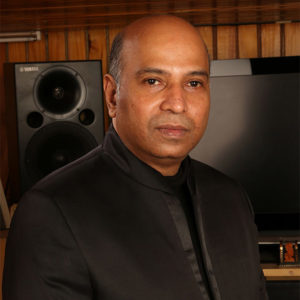 Ganesh B. Kumar L.T.C.L. is a music composer/producer from Chennai, India. He obtained his double Licentiate from the Trinity College of Music, London, under the tutelage of the renowned teacher Mr. Abdul Sattar. It was always his desire to compose music that would elevate the spirit of mankind. This goal has not changed to this day, and remains his standard of accomplishment as a composer.

RISE is a feel-good symphony in three movements, invoking the spirit of positivity. Inspired by a famous quote of Confucius, “The greatest glory in living lies not in never falling, but in rising every time we fall,” RISE is built around the altercation between “fall” and “rise,” which gradually evolves towards a triumphant finale. This Symphony is a humble tribute to one of the greatest musical geniuses of all time, Ludwig van Beethoven, whose music rose above every fall he experienced in his life.

THE JOURNEY From Despair to Hope: A Symphonic Poem

THE JOURNEY is a heart-wrenching symphonic poem, glorifying the spirit of humanity. The Second World War provides the backdrop for the riveting tale of displacement, migration, and resettlement of Polish refugees. This symphonic poem is a musical imagination depicting the emotional upheavals, swinging between despair and hope, that the refugees, mostly children, would have undergone during their long and arduous journey from Siberia to India. They passed through many countries before finally finding a safe haven, under the royal and benevolent generosity of Jam Saheb Digvijay Singhji, the Maharaj of the erstwhile Indian princely state of Nawanagar.

The musical depictions have been divided into various sections as detailed below:

Section I – The night before the journey
Lost Souls, a melancholic aria, evokes the desolate condition of the Polish refugees, mostly children, on a dark and chilly night as they anxiously await the break of dawn.

Section II – Arrival of trucks
The opening regimental theme heralds the arrival of a long convoy of trucks. In a somber yet orderly manner, the refugees board the trucks. As the convoy moves, a chromatic theme hints at the arduous journey ahead.

Section III – The journey through different territories
As the English horn states the principal journey theme, the music expands to multiple themes exploring new keys that symbolically represent the hustle and bustle of the outside world, as the trucks move through different territories and nations. The principal theme periodically recurs to depict the progress of the journey and to restate the pangs of separation and desolation.

Section IV – Misfortune strikes
Mishaps plague the desolate refugees, as misfortune strikes in the form of starvation, malnutrition, and dehydration. Syncopated progressions abound as their misery deepens, when a few of the trucks veer off the tracks due to the narrow mountainous terrain. Yet, amidst illness and death, the journey continues.

Section V – Pathos and grief
The aftermath of misfortune is pathos, which is evoked by a theme on strings. As the theme develops, the emotion is heightened by the use of a solo soprano, culminating in a solo violin restating the theme and reflecting their feelings of pain, sorrow, and anguish.

Section VI – Desolation
With their spirits at an all time low, a sense of helplessness grips the refugees. Here, the orchestra restates the opening aria in a metaphoric representation of their desolate condition. The section ends with an imperfect cadence as the future seems uncertain and bleak.

Section VII – Ray of hope
A single faint note resolves to a new key signifying a ray of hope. The borders of India become visible, and as the music develops, the refugees’ spirits are uplifted and they feel a sense of great relief.

Section VIII – ‘The Maharaj’ - Jam Saheb Digvijay Singhji
The regal entry of the Maharaj is announced by the brass section, followed by a gentle passage by the string section, reflecting his compassionate and large-hearted nature.

Section IX – The warm welcome
The warm welcome of the Maharaj overwhelms the refugees. As they alight from the trucks, a mellifluous theme in the 7/8 time signature with an Indian flavor pervades the scene. Along with a sense of liberation, a deep sense of gratitude swells from within. This is depicted by the entry of the choir, one section upon another, as they thank the Maharaj for his noble gesture addressing him fondly as Bapu (Father).

Section X – Extolling the virtues of the Maharaj
The sublime gesture of the Maharaj is glorified through the analogy found in an ancient poem from Purananooru (a collection of ancient verses in the Tamil language written circa 600 B.C.). This poem, Undaal Amma Ivvulagam, (It’s true that such people exist!), is sung by the whole choir, accompanied by the entire orchestra. The grand finale drives home the inspiring message that humanity traverses beyond all borders.

A Leaf From History...

Before World War II, many Polish people were forcefully sent by the Red Army to work in the labour camps of Siberia and Northeastern USSR that were run by the Russians. However, in 1941, when Hitler’s Nazi army attacked the Soviet Union, USSR came up with a general amnesty where the Polish people would be released from their labour camps, as a tactic to form a Polish army to fight the Germans. Many countries balked at the idea of providing shelter to these Polish people who were desperately seeking refuge.

During the period of British India, Maharaja Jam Saheb Digvijay Singhji was the Honourable Chancellor of the Council of Princes and member of the Imperial War Cabinet (1939–1945). Moved by the plight of the Polish refugees, the Maharaj graciously came forward to offer refuge to the desolate orphans. This noble gesture was the first of its kind in the world.

Thus began a long and arduous journey by road for a group of refugees, mostly children, from the coldest regions of the Soviet Union to a warmer climate in Central Asia. The journey was constantly ridden with pain, suffering, and misery, with some of them even losing their loved ones en-route due to cold, hunger, malnutrition, and dehydration. Some of the places through which they traversed were Ashkhabad in Turkmenistan, Mashhad, Isfahan, and Tehran in Iran, Afghanistan, and Quetta, Zahedan, and Karachi in present day Pakistan.

They crossed the Indian border in 1942 and reached their ultimate destination of Nawanagar, an erstwhile princely state in India, ruled by the Maharaj.

The Maharaj’s action resonated across the world and doors began to open for the Polish refugees. A noble gesture such as this can never be repaid. It can only be acknowledged, and serve as a lofty example worthy of emulation.