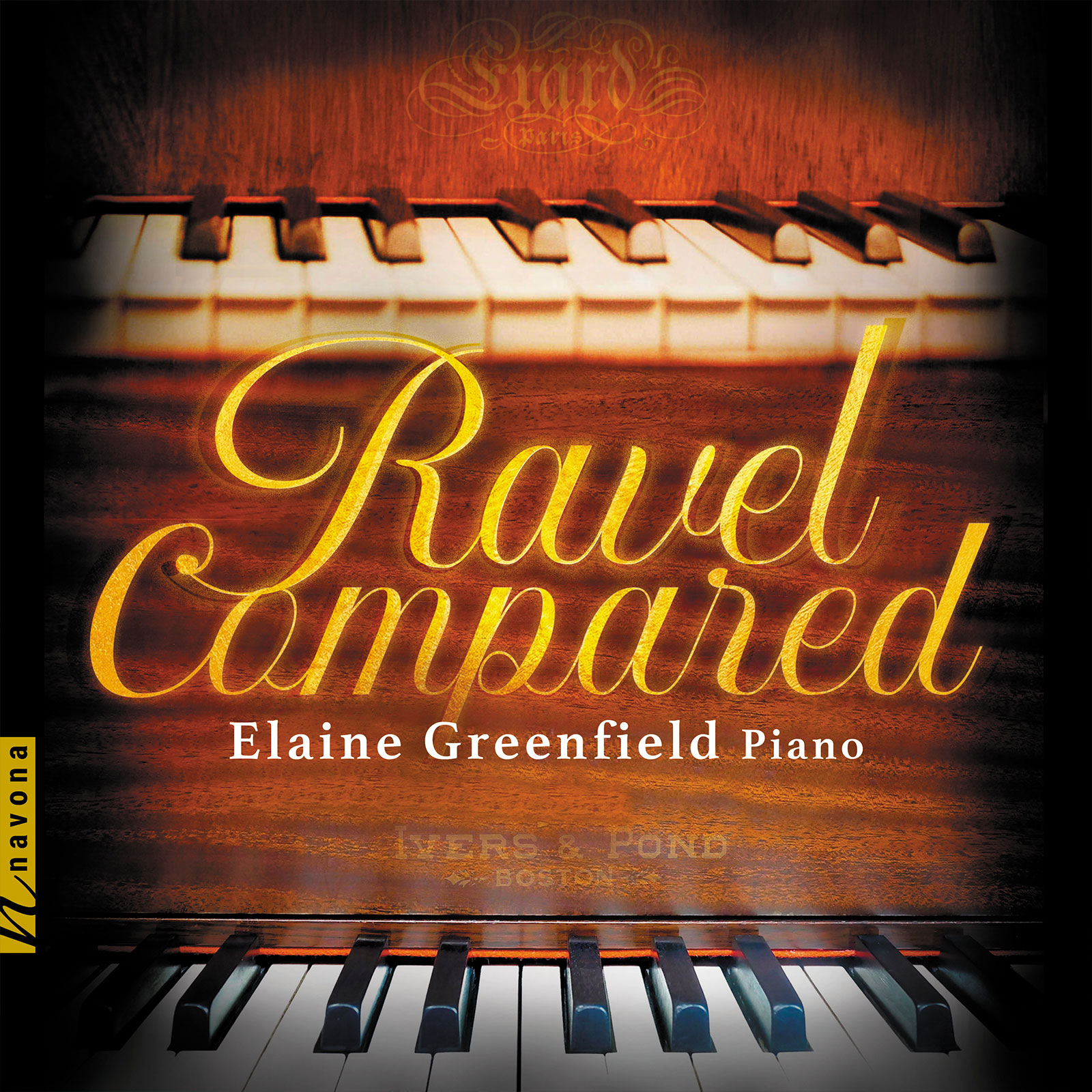 Acclaimed pianist Elaine Greenfield dazzles with originality, virtuosity and exuberant tone richness on her album RAVEL COMPARED on Navona Records. The French composer’s works are brilliantly analyzed and brought to novel clarity with Greenfield’s ingenious idea of recording the same repertoire twice, on two very different pianos – and juxtaposing them on this two-disc album.

The first disc presents Ravel’s music on an 1893 Erard from Paris, the same make and model as the composer’s personal piano, from which Greenfield coaxes a mellow, full-bodied tone with an almost liquid quality. This rendition is contrasted with a second on an American Ivers & Pond parlor concert grand from 1917, brightly highlighting Ravel’s idiosyncratic harmonies with modern, almost contemporary exactitude. Put together, RAVEL COMPARED palpably illustrates the depth of both Greenfield’s skill as a performer as well as Ravel’s aptitude as a composer – as lively and vivid as perhaps never before.

Dr. Harold Jones donated his 1917 Ivers & Pond (Boston) concert grand to the OASIS Upstate Medical Center, East Syracuse NY. Dr. Jones and the administration of the Center made the instrument available for these sessions. Gene Roe (Fitchburg MA) prepared and tuned it.

Without the substantive and spiritual support of the following, this project would not have been possible: 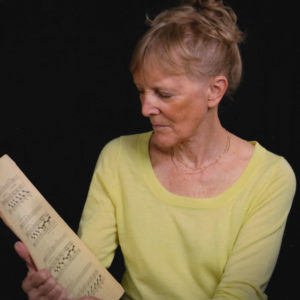 Elaine Greenfield is a widely acclaimed pianist, recognized internationally for her performances, recordings, and teaching, with a distinguished career as soloist/lecture recitalist, and collaborative artist. She has received rave reviews from The New York Times for performances at Carnegie, Merkin, and Steinway Halls; and nationally for performances at the Phillips Collection, Boston’s Gardner Museum; plus, university and community concert series coast to coast. She has been televised and broadcast over national and international radio, including the BBC, NPR, WGBH, WNYC, WAMC, WVPR, and KBAQ. Elaine was a founder of VT Contemporary Music Ensemble, and toured for two decades with Philadelphia flutist & NY Concert Artist Guild winner, Pamela Guidetti. 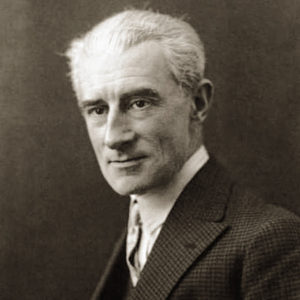 Maurice Ravel, in full Joseph-Maurice Ravel, (born March 7, 1875, Ciboure, France—died December 28, 1937, Paris), was a French composer of Swiss-Basque descent, noted for his musical craftsmanship, perfection of form and style, and distinct musical language. Ravel was born in a village near Saint-Jean-de-Luz, France, of a Swiss father and a Basque mother. His family background was an artistic, cultivated one, and the young Maurice received every encouragement when his musical talent became apparent at an early age.

The idea for this double disc recording evolved from my affinity for French piano works, specifically those of Debussy and Ravel. At the Frederick Historical Piano Collection, Ashburnham MA, I performed the 24 Préludes of Claude Debussy on an incomparable 1907 Blüthner Grand (Leipzig), similar to the composer’s studio piano (which still exists). The sound produced by this piano may well be as Debussy heard it. What it revealed left me awestruck, and I felt compelled to return and record the complete Préludes. The two-CD set appeared in 2004.

Having admired and performed Ravel’s piano works for decades, I decided on a similar, eventually more involved, project with his music. I returned to the Frederick Collection for a recital and intensive recording sessions of carefully chosen Ravel pieces. My piano of choice was an 1893 Erard, of the same make and model as Ravel’s personal piano. As with Debussy’s Blüthner, the Erard brilliantly expresses the composer’s music, revealing sounds we can believe he wanted listeners to hear. Among many compelling characteristics, the piano’s gorgeous, subtly varied tonal palette from register to register is distinctive and truly inspiring.

My idea then took on a further dimension. I decided to add a second recording of exactly the same works, on a recognizably more modern piano, as a contrast.

My quest for the perfect piano began. Having performed on a number of lovely instruments of varying makes, I could not settle on any one of them. As I traveled with the Ravel program, a fortuitous engagement in Syracuse NY brought me to the 1917 Ivers & Pond Parlor Concert Grand (Boston) on disc 2. It lives at an OASIS center sponsored by Syracuse University, where an annual series of concerts takes place. From my first encounter with this piano, I knew it was the ideal instrument for my project. It produced a full, rich sound, easily varied from register to register, capable of realizing Ravel’s intentions, yet differing strikingly from the Fredericks’ Erard. As with the Erard, I never had a struggle to overcome the limiting uniformity of a modern-era piano. Soon the differences between the pianos became irrelevant. I could relax into the playing, letting the sound reveal Ravel’s intentions.

The result is “Ravel Compared.”

It is my hope that with this recording listeners will recognize and enjoy each piano’s distinct character, and, most of all, gain insight into Ravel’s glorious music.

The 1893 Erard piano of Paris is the same model as composer Maurice Ravel’s own studio piano. While smaller than a full-size concert grand, it has plenty of tone for a modest size concert venue. It is parallel-strung, with a composite iron frame, at a time when several piano makers were building pianos with crossed-over bass strings and single-piece cast iron frames. Erard pianos are known for their liquid clarity, from the lowest notes to their sparkling trebles. Perhaps their tone explains why so many compositions by Mendelssohn, Chopin, Liszt, and the French Impressionists referenced water. This liquid quality is very present in Ravel’s musical depiction of Ondine, the water sprite, from his suite, Gaspard de la nuit, one of the pieces heard on this recording.

Ivers & Pond was one of the most notable Boston piano firms of the early 20th century.  It produced expensive, well-made pianos, often of lavish woods with amazing cabinetwork detail, rivaling Steinway for excellence in design and sound quality. Unfortunately, like many other renowned piano makers ravaged by the Great Depression, Ivers & Pond ceased to exist by mid-century.

The Ivers & Pond piano used in this recording is a 1917 Parlor Concert Grand, the manufacturer’s top-of-the-line offering.  It is extremely heavy, resulting in richness and clarity of tone, and outstanding tuning stability.  Built during Ravel’s lifetime, it required only minimal restoration and continues to represent the authentic sound of piano’s Golden Age. It is perfect for the performance of Ravel’s piano works, lending tonal variety from the bottom to topmost registers.