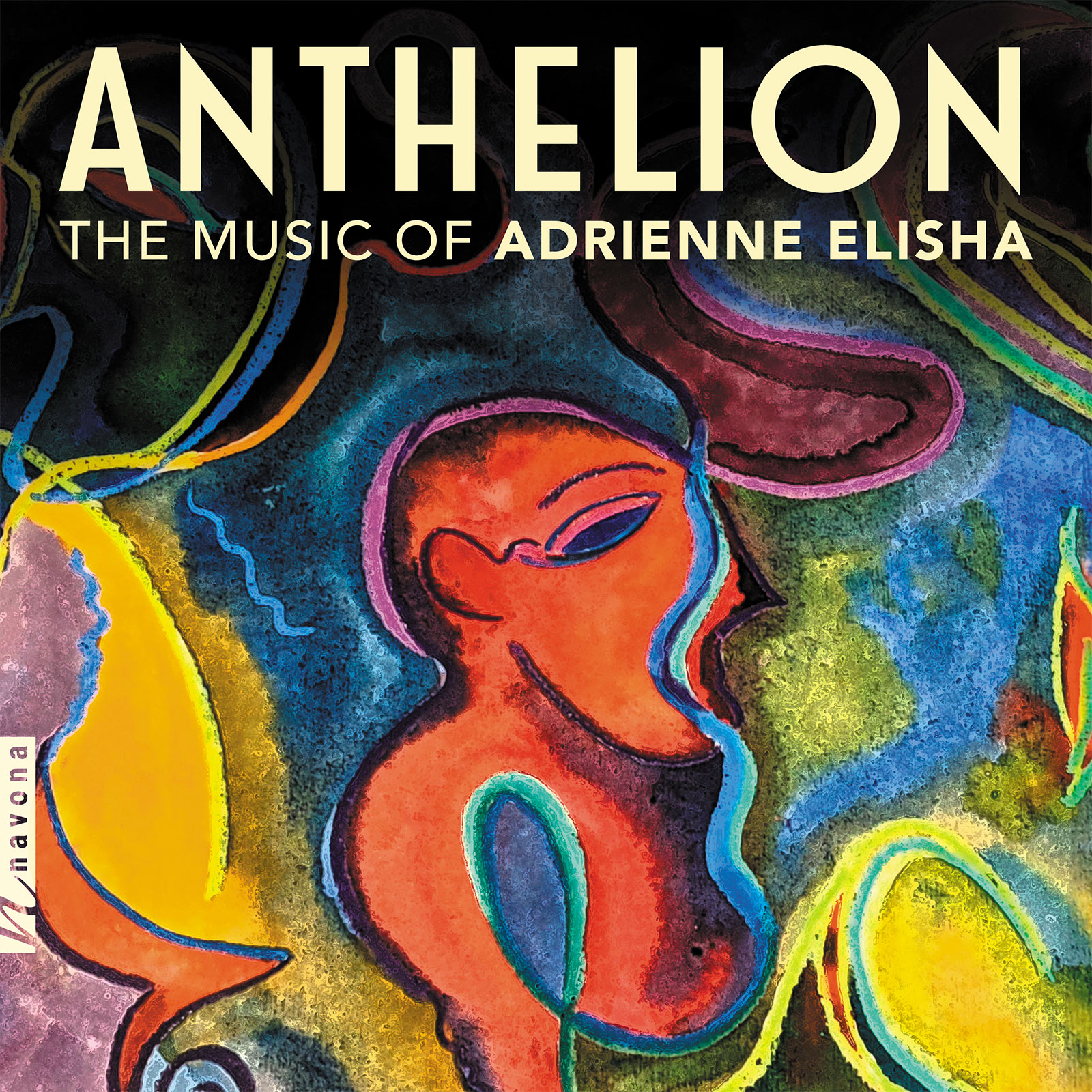 The Music Of Adrienne Elisha

Navona Records presents ANTHELION, showcasing favorite works from composer Adrienne Elisha (1958-2017). The works that comprise the album are technically demanding and rich in philosophical significance. Anthelion, for one, is a sonic contemplation of a natural phenomenon in which the sun’s light is projected across the sky, reflecting itself on the opposite horizon. The two-movement work, scored for flute, clarinet, violin, violoncello, percussion, and piano, expresses moments of “sonic abstraction” and continuous reverberation by way of unique instrumental timbres. In TranscenDance, on the other hand, Elisha makes a humanistic statement about the Syrian civil war, borrowing joyful melodies from Arab music and reimagining them in an orchestral setting. In this way, the music of ANTHELION is at once abstract and deeply contextual, challenging yet ultimately transcendent. 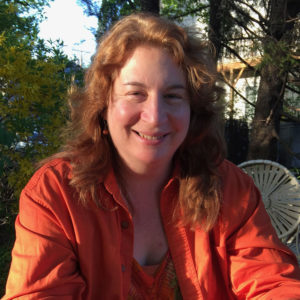 Adrienne Elisha (1958-2017), a native of Glen Cove NY, studied violin and composition at Indiana University. She earned an Artist Diploma in Viola Performance at the Cleveland Institute of Music and a doctorate in Composition at the University of Buffalo. As a performer, she specialized in the performance of contemporary music, playing in new-music ensembles such as the Cleveland Chamber Symphony, Slee Sinfonietta, as well as the Boston Modern Orchestra Project.

Conductor and percussionist James Baker (Anthelion) serves as Music Director and Conductor of the Composers Conference at Wellesley College. A prominent performer of contemporary music, he is on the faculty of the Mannes School of Music in New York City.

Flutist Barry Crawford (Anthelion) regularly performs as a guest artist with some of the New York area’s leading ensembles, and enjoys an international career as a soloist, chamber musician, and teacher.

Violinist Miranda Cuckson (Anthelion) has performed as a soloist at important venues around the world, given numerous world premieres by major composers, and released 10 CD albums, mostly of contemporary music.

Cellist Steven Elisha (Feneketlento), Head of Strings and Director of Orchestras at Georgia Southern University, often appears with his wife, violinist Larisa Elisha as the Elaris Duo. His recording of his sister Adrienne Elisha’s concerto Cry of the Dove is available on Youtube.

Conductor David Feltner (Azure, TranscenDance) founded the Chamber Orchestra of Boston in 2001, winning praise from audiences and critics alike for his innovative programming and for his dedication to contemporary music.

Cellist-composer Jonathan Golove (Harrier) teaches at the University at Buffalo. He has performed widely not only on the classical cello but on the electric instrument as well, and has been particularly active in the revival of the Theremin cello from the 1920s.

Cellist Joshua Gordon (Anthelion), a member of the acclaimed Lydian String Quartet, teaches at Brandeis University, and performs widely as a soloist or in a duo with pianist Randall Hodgkinson.

Clarinetist Jean Kopperud (Anthelion) has performed worldwide as a soloist and a chamber musician. A longtime member of the New York New Music Ensemble, she teaches at the University at Buffalo.

Pianist Blair McMillen (Anthelion) is an internationally-known expert in contemporary music. He is the co-director of the Rite of Summer music on Governors Island, and is on the faculty of both Bard College and the Mannes School of Music/The New School.

Percussionist Ben Paysen (Anthelion) is based in the San Franciso Bay area and has performed with groups such as SŌ Percussion and the San Francisco Contemporary Music Players, among others.

Bassist James VanDemark (Harrier) has been on the faculty of the Eastman School of Music since 1976. He is one of the rare double-bass players to enjoy an international solo career. In 2011, he commissioned Adrienne Elisha to write the solo piece In Cantation, which was also adapted as a ballet by Rochester City Ballet in 2014.

Anthelion was written during the Edenkoben residency and was first performed by the Ensemble Interface under Scott Voyles in Mannheim, Germany. It is a two-movement work scored for flute, clarinet, violin, violoncello, percussion, and piano.

The composer wrote about the piece:

“An anthelion is a visual phenomenon which occurs when the sun’s light is projected across the sky and its reflection with a glowing halo of light appears on the opposite side of the horizon. The dramatic visual image inspires ideas for musical form and unique instrumental timbres/sonic colors in the use of resonance.

The first movement, “Sonic,” is an abstract sonic translation of the perceptual experience which is sparked by the image of a great and ever constant burning star of pure light. A sustained intensity in the unfolding of musical material and the economical use of pure sound are the most prominent characteristics in this movement.

The second movement, “Resonance,” is a developmental continuation and a “reverberation,” yet at the same time has elements which contrast with the first movement. The character of this movement is brilliant and forceful, suggesting an explosive resonance of “sonic light.” The work gathers momentum to its climax, leaving sonic “sparks” in the aftermath which softly evaporate into infinity.

Lastly the image of the sun and its anthelion “twin” conjures up some fascinating philosophical implications: the possibility for the co-existence of opposing forces in nature; the simultaneous existence of “the real” and “the fantastic.”

What is reality and what is illusion? It’s the listener’s perception… and the perceiver’s decision.”

Harrier was first performed in Cleveland in 1997. This trio basso (viola-cello-double bass) was inspired by the flight of harrier hawks, and captured both the motion of these majestic birds and the feelings of the observer. Elisha included in her manuscript a dedication “to the preservation of American (and world) wildlife.”

“The work begins “with air and fire,” as the viola and cello play eerie-sounding half-harmonics, quasi [sul] ponticello. The other constitutive element, a melody in long notes and extensive glissando, first appears in the double bass before it is taken over by the other instruments. Energetic, non-pitched sounds played over the bridge are followed by a “mysterious” melody that becomes more and more insistent until it dissolves in the returning half-harmonics and finally in a hypnotic tremolo passage that simply evaporates as the birds disappear beyond the horizon.”

The Feneketlen tó (“Bottomless Lake”) is a small pond located within the city of Budapest, Hungary, where Elisha once took a long walk. The last two syllables of the name sound like the Italian Lento (slow), which provided the initial idea for this monodrama for solo cello, written for the composer’s brother Steven Elisha in 2003/2004. A long postlude to the cello concerto Cry of the Dove (2000), Feneketlento (Elisha rendered the name as “The Eternal Lake”) is a complex and passionate work; it uses extended techniques (varying finger pressures, harmonics, sul tasto, sul ponticello, etc.) and includes agitated arpeggios, long, yearning melodies, scurrying chromatic passages and violent outbursts. In turn meditative and dramatic, Feneketlento is a deeply personal document, a contemplation of eternity and bottomless depths, and a musical letter to Steven.

Inner Voices for solo viola was written at the request of composer Ofer Ben-Amots in 1998. Elisha performed the world premiere in the summer of the same year, during a festival of new music at Colorado College in Colorado Springs. Subsequently, she played the piece many times, both in the United States and in Europe.

In this piece, the violist often has to sing and play at the same time. Elisha wrote:

“The work is framed by a special chord progression where the voice and the instrument blend together to produce a special timbre. The chords are played powerfully at the beginning, and in a more subdued form in the middle and at the end. There is a highly virtuosic section, where the bow moves closer and closer to the bridge until it ends up on the other side, and finally dissolves in some eerie, fluttering noises. Later, an espressivo melody, all in harmonics, leads to another fast section played with half finger pressure to create what the composer called “multi-overtones.” A dreamy, almost transfigured version of the opening chords concludes the work.”

Since the beginning of the Syrian civil war in 2011, Elisha was intensely preoccupied by this ongoing conflict. She felt that the war was all people knew about when it came to Syria, and she considered it her duty as a composer to show that the country had to have a warm, human side. She started to listen to music from Syria and became fascinated by it. When, following the success of Azure, conductor David Feltner asked her for another piece for the Chamber Orchestra of Boston, Elisha responded with TranscenDance, a work scored for a classical orchestra with two oboes, two horns, and strings. Here, as the punning title indicates, a joyful, down-to-earth source material is taken to a whole new emotional and spiritual level.

Elisha treated the Arab melodies with a great deal of freedom, yet they are readily recognizable even in their new orchestral garb. Following an opening invocation by the solo oboe, the melodies emerge from the background with great vigor, only to subside and gradually disappear in the powerful sustained string chords with which the piece ends. Elisha likened this conclusion to a wadi—an Arabic word for a dried-up riverbed.

TranscenDance was dedicated to David Feltner and the Chamber Orchestra of Boston.

Commissioned by David Feltner for the Chamber Orchestra of Boston, Azure may be performed either by eight solo strings or by a string orchestra. Elisha included the following remarks in the score:

“Azure is a work about the beauty and intensity of the present moment. This beauty (which can be real or imagined) colors and reflects back on our perception of time and the past. It creates a sense of timelessness and infinity which has always been, yet it is always becoming as it goes on into the future.

A sustained intensity and concentration should musically engage the players (and audience) for the duration of the work, constantly drawing the listener in, even in pianissimo passages. With the exception of where the sound/color changes and becomes more transparent or sul tasto, a core sound should be maintained/sustained as much as possible.

The glissandi are extremely important in this work as they create a kind of merging of pitch and timbre. In fact the movement of the combined pitches of the piece (even those not in glissandi) create timbral colors (which is also why it is important for intonation to be as precise as possible). Just as the ornaments in Schumann are imbued with melodic significance, so are the glissandi in this piece; they are not only a means to get from one thing to the “next thing” but are expressive in and of themselves. In general, they should be on the slower side. The character of the glissandi should also be sustained and magnetic, first settling on the pitch they are coming from and then with direction (like a runner in slow motion on film) “pulling the ear along,” creating a constantly evolving harmonic and expressive interest along the way.”

Azure was dedicated to Don Reinfeld, a cellist and dear friend who particularly loved the piece.