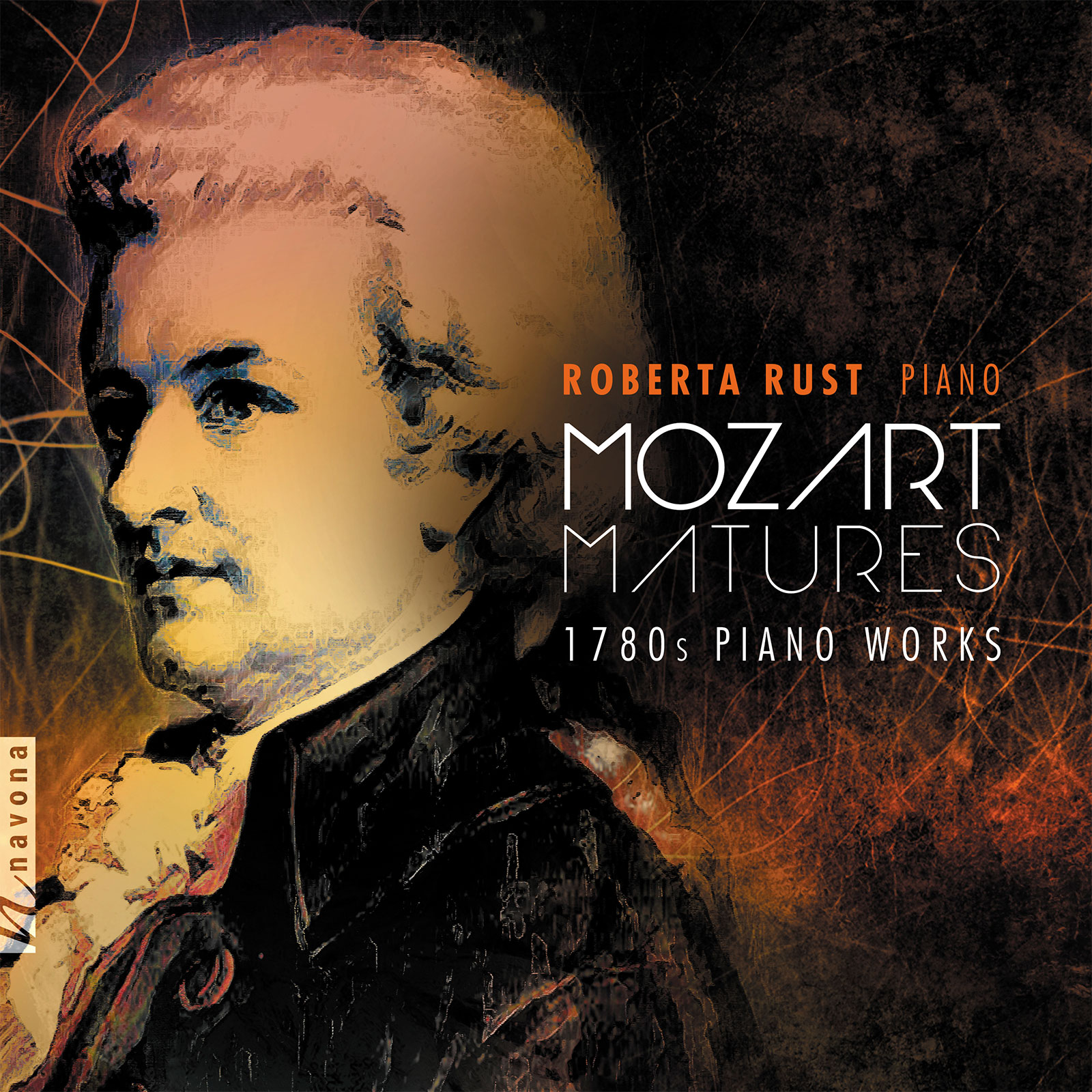 Largely eschewing the popular tunes, Rust instead carefully handpicked musical selections designed to showcase the composer’s structural, technical, and harmonic development. The Sonata in F Major, K. 332, with its never-ending twists and turns, makes for a great starting point. But, considering that Rust is a talented extemporizer on the piano herself, it comes as no surprise that many of the pieces on MOZART MATURES are those originally conceived as improvisations. There are the two Fantasies in D minor and C minor, but also the quirky, prescient Gigue which Mozart hastily wrote into a German friend’s friendship album. And lest things get out of hand, the calmer Adagio in B minor as well as the Rondo in A minor round off the selection with timeless depth and serenity – the particular kind achieved in history by this one singular composer. 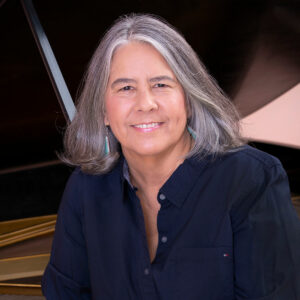 Although he died slightly less than two months before his thirty-sixth birthday, Wolfgang Amadeus Mozart (1756-1791) was a child prodigy who began composing at the age of five, and taking this into account, his compositional life thus spanned thirty years, a career which can be viewed like that of most composers as a series of recognizable periods.

The compositions recorded here all date from a pivotal time in Mozart’s life, the 1780s. After spending his youth touring Europe as a virtuoso pianist from 1762-73 (ages 6 to 18), Mozart returned to his hometown, Salzburg, Austria, to work as a court musician for Prince-Archbishop Hieronymus von Colloredo. Except for a period in 1777-78 when he visited Mannheim and lived briefly in Paris, Mozart remained in Salzburg until 1781. Unhappy in his work there, he longed to move to Vienna, the cultural center of the German-speaking world at this time, and establish himself as a freelance composer and performer. The opportunity arose when Archbishop Colloredo called Mozart to Vienna in March 1781 for the festivities associated with the accession of Joseph II as the sole ruler of the Holy Roman Empire after the death of his mother, Empress Maria Theresa. In June, after having his request refused the month before, the composer was released from his employment by the Archbishop, and began, at the age of twenty-five, his new life in Vienna. H. C. Robbins Landon, a prominent Mozart scholar, titled one of his books Mozart: The Golden Years, 1781 — 1791, and indeed it was during these years that Mozart fully blossomed as a great composer and created his most profound works.

When compared to other child prodigies, Mozart stands out in his ability to grow as a composer. Throughout his short life he continued to learn, constantly incorporating new techniques and achieving greater and greater depth in his music. Here in Vienna, in the 1780s, Mozart came into contact with a number of new influences that were to transform his musical language.

Noticeable during this period was the increased use of counterpoint in Mozart’s works, not just in the more obvious composition of fugues and fugato passages, but also on a more subtle level, employing counterpoint within the homophonic (melody and accompaniment) style galant textures that were typical of the Classical era. We begin to see in his works of this time a greater independence of the inner parts and canonic imitations between the various voices of the texture, rather than just a reliance on simple Alberti bass chordal accompaniments. To some extent this interest in counterpoint can certainly be traced to the fact that Mozart was introduced to the music of various Baroque composers by Baron Gottfried van Swieten (1733-1803). They met soon after Mozart’s move to Vienna, after a previous encounter in 1768 when Mozart was on one of his early tours, and van Swieten quickly became his devoted patron. The Baron was instrumental in acquiring important commissions for Mozart throughout the rest of his life and they remained close until the composer’s death. Earlier, van Swieten had been in Berlin as ambassador to the court of Frederick the Great, where he came in contact with the music of Bach, Handel, and other German Baroque and early Classical composers. The Baron brought these scores to Vienna when he returned in 1777, where he shared them with Mozart and others and presented this music in recitals.

One of the most important influences on Mozart during these years was that of his great contemporary, Franz Joseph Haydn (1732-1809). It appears that the two composers first met in 1783 or 1784 and they soon became friends, even playing together as members of a string quartet. It was in fact the quartets, of all Haydn’s works, that most affected Mozart. Haydn’s two sets, Op.20 (1772) and Op.33 (1781), are generally regarded as milestones in the history of the string quartet and Mozart was familiar with these works. In response, during the years 1782-85 Mozart wrote six quartets that he dedicated to Haydn. The composition of these works, meant as a set, occurred over a two-year period, something rather unusual for Mozart, indicating the seriousness with which he took this project. These quartets clearly resemble Haydn in the increased prominence of their inner parts—the second violin and viola—resulting in greater equality between all voices; however, it is Mozart’s expanded use of thematic development that reflects his greatest debt to Haydn. From a young age Mozart was a master of musical timing and his ability to join together a series of beautiful and sometimes contrasting themes was unequaled. Under Haydn’s influence Mozart began to integrate the different themes within a movement by recalling, varying, and transforming motives throughout the work. While Haydn, and later Beethoven, seemed more naturally motivic composers, Mozart, always able to learn, began to incorporate a more motivic manner of thinking into his works during these years.

Another characteristic of Mozart’s Viennese music is its pervasive chromaticism—the use of raised and lowered notes of the diatonic scale. Whether he was influenced in this by the music of another composer, as might have occurred through his new familiarity with the music of Bach, an earlier master of this compositional technique, or it simply came from within himself, may never be known, but the distinctive melodic and harmonic color of Mozart’s later music is largely dependent on this characteristic. In Haydn’s works of the 1790s, written after Mozart’s death, we see an increased use of chromaticism and this is conceivably an example where the younger composer influenced the older master.

Although Mozart was a gifted violinist/violist, his preferred instrument was the keyboard, and throughout his life he produced a steady stream of works for this instrument—sonatas, variations sets, concertos, chamber works with piano, as well as a number of miscellaneous solo pieces. During his early years in Vienna he especially tried to establish himself as a piano virtuoso and achieved a certain level of success. Starting in 1782, Mozart produced a series of seventeen piano concertos, largely meant for himself to perform, which set the standard for all concertos that follow. He was also renowned as an improviser, and many of his solo keyboard works may have originated in this manner. The works presented on this recording were all composed during the period after Mozart’s move to Vienna and fully demonstrate the characteristics discussed above—rich contrapuntal textures, greater motivic unity and thematic development, and pervasive chromaticism.

Mozart’s fantasies probably originated as improvisations that the composer chose for some reason to write out. These are mercurial works, filled with sharp contrasts and a free approach regarding form. They perhaps show the influence of C. P. E. Bach, who composed a number of solo keyboard fantasies and for whom Mozart expressed admiration. The Fantasy in D minor, after an andante introduction, continues with two clear, contrasting sections—a sensitive adagio in D minor, with numerous chromatic melodic inflections, followed by a bright, cheery allegretto in the parallel key, D major. This fantasy has proved to be one of Mozart’s most popular keyboard compositions with both amateurs and professionals. It was apparently left incomplete by Mozart and is usually performed with a ten-measure conclusion, probably composed by August Eberhard Müller for an edition published in 1806.

This sonata was written around the time Mozart moved to Vienna and stylistically represents this transitional period in his life. It brims with variety and contrast, not yet demonstrating the motivic/thematic unity that was to become more apparent in his later compositions. The first movement is in sonata form, as is typical, with an exposition that states seven distinct and contrasting themes before proceeding to a development that begins with yet another new theme. Mozart’s exquisite sense of pace and timing prevent this movement from becoming a mere kaleidoscopic sequence of events. The slow movement, in sonatina form (a sonata form without development), is of a more unified character. Its clear melodic line, ornamented at times, reminds the listener that Mozart was equally successful as a vocal and instrumental composer. The brilliant finale, also in sonata form, again presents a number of contrasting themes; however, the driving forward motion is sustained throughout the movement.

The Adagio in B minor is in binary form, the ubiquitous structure employed in most instrumental movements of the Baroque and Classical periods, particularly in slow movements; however, identifying this aspect does little to explain Mozart’s expert control of contrasting textures and thematic material in this piece. This adagio is an independent composition, and not part of a larger composition; however, it is a fully realized work demonstrating all of the mature characteristics of Mozart’s other, more large-scale Viennese compositions.

The Gigue in G major, K. 574 is one of a number of compositions Mozart wrote in response to his discovery of the music of Bach, Handel and other Baroque composers during his Viennese years. Numerous fugues, some incomplete, as well as a three-movement Suite in C major/minor (Overture, Allemande, and Courante) date from this period. This piece conforms to the typical Baroque gigue as practiced by Bach and shows that Mozart was an observant student. A gigue, like most Baroque dance movements, was in binary form and was typically in a compound meter—6/8, 9/8, or 12/8. As well, it was often more imitative than the other dances in a suite. Mozart’s Gigue follows all these norms and adds his characteristic chromaticism. An interesting anecdote is that Tchaikovsky orchestrated this work as the first movement of his Orchestral Suite No. 4 “Mozartiana.”

The Fantasy in C minor, K. 475 is certainly one of Mozart’s most profound utterances, filled with great drama and surprising contrasts. The work proceeds through five contrasting sections, alternating between fast and slow tempi: Adagio-Allegro-Andantino-Più Allegro-Adagio. Most striking are the unusual and distant modulations which start at the very opening—the piece begins in C minor but within the first nine measures it moves through B flat minor, D flat major, and E flat minor and the modulations continue until the first part of the opening adagio ends on the dominant chord of B minor in measure 25. The remainder of the fantasy continues with these almost Wagnerian modulations. When the Fantasy in C minor was first published in 1785, the year it was composed, Mozart paired it with the Sonata in C minor, K. 457, written the previous year. Whether performed with the sonata or alone, this work makes a deep impression on the listener.

A rondo is a composition with a recurring refrain theme which alternates with a number of contrasting episodes in other keys. It is most often used as the finale in sonatas and concertos; however, Mozart composed three independent rondos in 1786-1787 and the third is one of his most beautiful works for solo piano. The elegant refrain theme demonstrates Mozart’s sensitive use of melodic chromaticism. The work as a whole is wonderfully balanced formally and ends with a developmental coda that anticipates the extended codas of Beethoven.