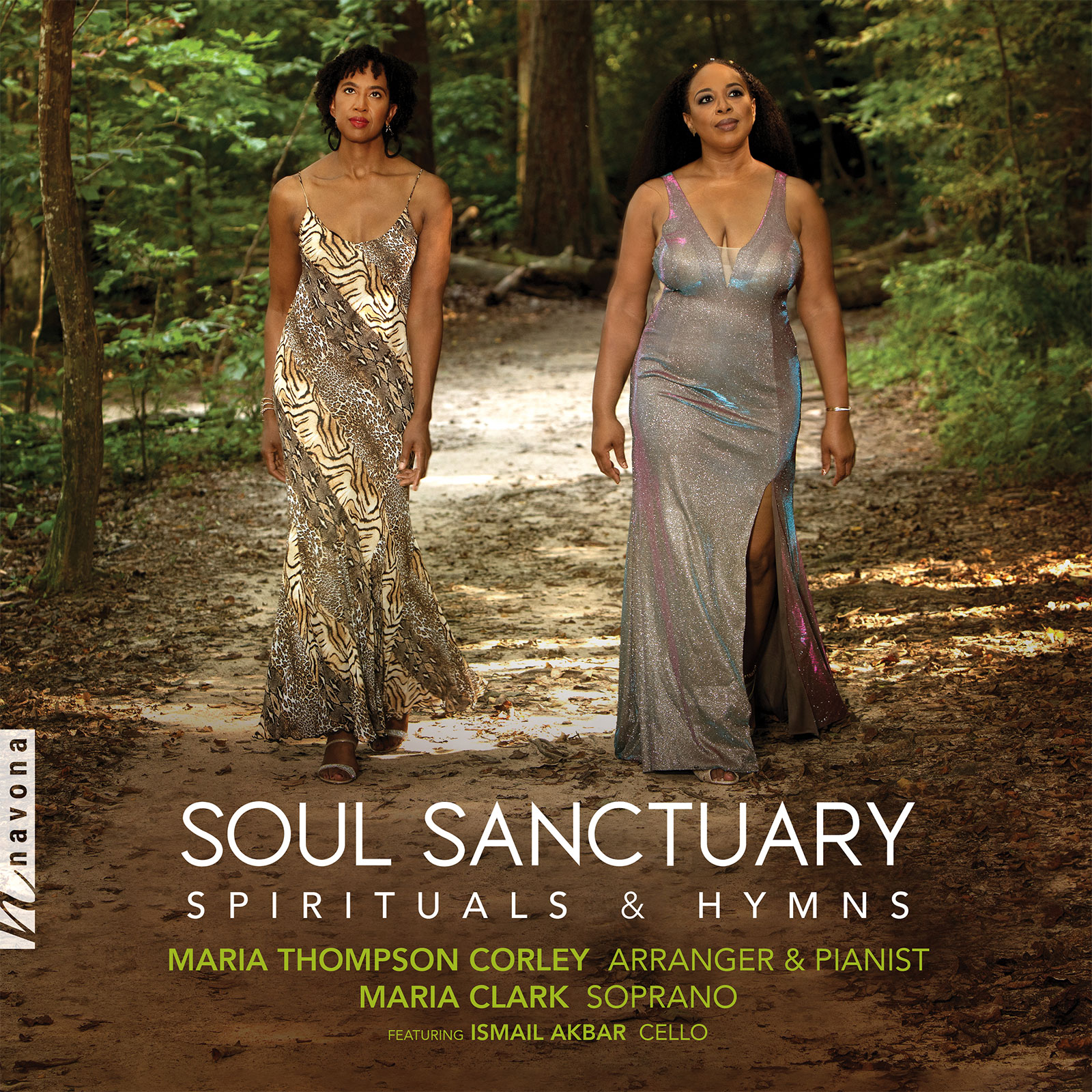 Soprano Maria Clark and pianist Maria Thompson Corley navigate the intense emotion, scars of suffering, and religious passion in the hymns and gospels on SOUL SANCTUARY from Navona Records. Featuring empowering spirituals from the past two centuries, the duo brings to life religious songs that have stood the test of time and find deep relevance today. Arranged by Thompson Corley and recorded in Atlanta GA’s Peachtree Presbyterian Church, these spirituals, including His Eye is on the Sparrow, Wade in the Water, and Glory, Glory, Hallelujah, offer uplifting outlooks in the face of adversity. 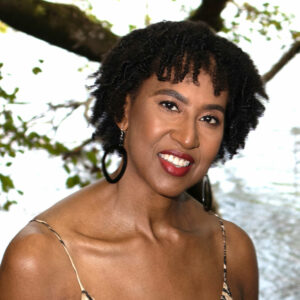 A graduate of the University of Alberta (B.M., Piano) and The Juilliard School (M.M., D.M.A., Piano), Maria Thompson Corley has performed in venues like the Liszt Academy. Her solo and collaborative recordings are released by Naxos, Albany, MSR Classical, and others. Excerpts from her albums have been featured in films and television soundtracks, as well as on radio and digital platforms, nationally and internationally. 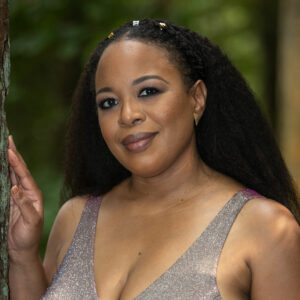 Maria Clark has been acclaimed for her virtuosic skills of expressive singing across the idioms of Opera, Oratorio, and Art Song, and has been critiqued as possessing “The Voice of An Angel.” One of the most important aspects of her vocal abilities is her superb control of a very large instrument, all the while presenting a beautiful, rich, and layered voice. 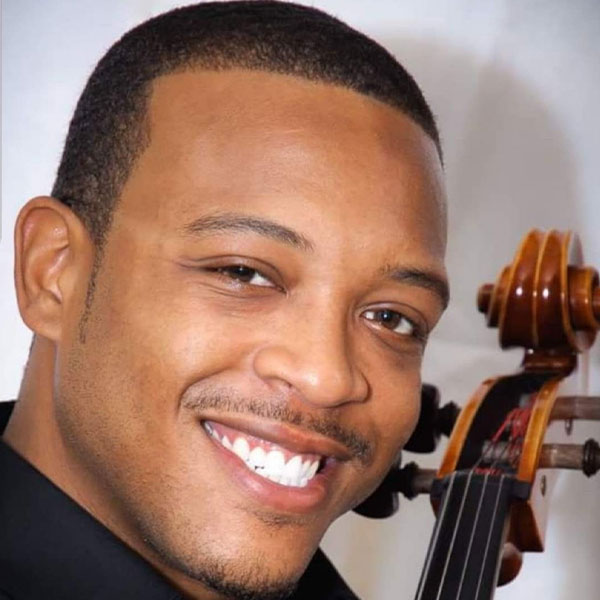 My first arrangements of spirituals were Steal Away and an early version of Glory, Glory Hallelujah, for my then-fiance Chris Corley’s Juilliard Masters recital in 1991. People seemed to like them, but I never assumed anyone else would sing them. As it turned out, Chris’s performances of Steal Away during his Ph.D. studies at Florida State University led to other performances, a recording — by soprano Randye Jones on her CD, Come Down, Angels — and my first paid commission, also from Randye, of I Want Jesus to Walk With Me. With my confidence boosted, I gave a copy of Steal Away to countertenor Darryl Taylor, founder of the African American Art Song Alliance. In 2011, he came across my handwritten score while collecting repertoire for a recording with pianist Brent McMunn of How Sweet the Sound: A Charm of Spirituals, and decided to include it in his release.

Despite this affirmation, I never imagined becoming a professional composer/arranger; my lane had always been piano, whether solo or collaborative. Yet, when close friends asked me to push outside my comfort zone and compose — most notably, Darryl and Kristin Sims, a Lancaster-based soprano — I took on the challenge anyway. Eventually, people like soprano diva Maria Clark, who knew me when I was a professor at Florida A&M and she was a student at FSU, came to embrace my music. It was her interest in performing my songs that led to this recording.

Clark wanted to include some improvisations on SOUL SANCTUARY; His Eye is on the Sparrow and Lord, I’ll Go were created during the recording session, and Hold On is my recreation of an improvisation I recorded on my phone in my living room. Plenty Good Room and Motherless Child/Swing Low, Sweet Chariot are adaptations of arrangements I made for the Tallahassee Boys Choir in the early 1990’s. No Hiding Place is a revision of a version written for bass Benjamin Polite, who was a student when I taught at FAMU. Darryl Taylor asked me to write down Lord, I Want to be a Christian after we used it as an improvised third encore; I’d long forgotten it, and came up with something else instead.

The last four pieces on SOUL SANCTUARY are particularly special to me. My mother, Eva Caisey Thompson, who often believes in me more than I believe in myself, asked me to arrange Unto the Hills for her to play at a funeral. A departure from the spirituals and gospel songs that make up the rest of this recording, it was a hymn she knew from her childhood in Bermuda, where she attended Bethel African Methodist Episcopal Church, one of the 5 churches her grandfather founded on the island. Crossing Jordan, a trio of spirituals with cello, began with my daughter Kiana’s request that I arrange Deep River for her senior recital in 2019; the debut cellist was my dear friend and duo partner, Sara Male. Before its debut, however, my sister Alicia Thompson and her son Justin Griffin, a gifted teen trumpeter, adapted it for a church service by repeating a section. I liked the result, which led to the arrangement’s current form. I added His Name So Sweet and Wade in the Water with the thought that a future singer might be more interested in recruiting a cellist to perform Deep River if that person would have more than one piece to play. Quite the paradigm shift from my thoughts after writing Steal Away!

I knew that I wanted to do a recording of African American Spirituals; the question was, which ones did I want to record, and by which composers? I dragged my feet on the idea because the traditional spirituals of Harry T. Burleigh, Hall Johnson, and even Moses Hogan, for example, had been largely overdone, and I wanted something new.

I had met and worked with Maria Thompson Corley as a student at FSU and knew her to be a brilliant musician. We reconnected via Facebook, and when I saw her mentioning something about her musical compositions, I immediately contacted her. I was interested in where I could locate her music, because I knew that anything she wrote would be good. She eventually sent me several of her Spirituals and I fell in love with the arrangements, and even had some of my students sing them on their recitals. The more I explored them and sang through them, the more I loved the way that they fit in my soprano voice, and that her settings were traditional, mixed with a more innovative, contemporary style.

My favorite, I Want Jesus to Walk with Me sealed the deal on my interest to record. I had heard this spiritual sung in my childhood, although I could not place exactly where or when. I also now understand what it means to have a need for SPIRIT to carry you through the most detrimental times in your life, and that’s exactly what this spiritual is about. The others — such as Steal Away — took me back to the cotton fields in the South where our ancestors were singing in hidden codes. Motherless Child/Swing Low, Sweet Chariot took me to times of wanting to give up and just get my crown but knowing that I can’t because there’s more work to do. Glory, Glory Hallelujah addressed being tired, knowing that one day you’ll get to lay your burdens down. And underneath those powerful messages, we have the musical genius of Corley. Her settings are never underdone musically and never overdone. There is subtlety yet passion in her music throughout.

And then there are the improvisations, with the biggest one that we did together being the hymn, His Eye is on the Sparrow. Honestly, when we got ready to record it, I was scared. I didn’t know what I would do musically, but something said, “just let SPIRIT guide you,” and that’s what I think we both did, and it turned out to be a special rendition that I hope everyone enjoys. I hope that our music-making blesses and touches people, and helps them to get through rough times and days, or can be a warm hug around them, or a friendly touch. These songs have been a rock to me in recent times, as I was practicing them, and also as I continue to listen to them in anticipation of releasing them to the world.

Amen, and to GOD be the glory!

First and foremost, we thank God for the gift of music, and the ancestors who somehow brought beauty from the ashes of unspeakable cruelty. We’re also grateful to Mary Monroe Hoffman, Trey Clegg, and Dr. Dwight Andrews.

I’d also like to thank Maria Clark for initiating and lending her gorgeous voice to this project, everyone who has encouraged my compositional journey, and my family for their loving care and support.

Thank you to the FATHER, who works through musical geniuses such as Maria Thompson Corley to inspire me to want to use my gifts. Thank you to my family for their support and to the members of my church whose soul-baring singing and praying have remained with me from childhood. And a special thanks to my beautiful son, Elijah, who strengthened and renewed my faith in GOD to know without a doubt, that HE is real.