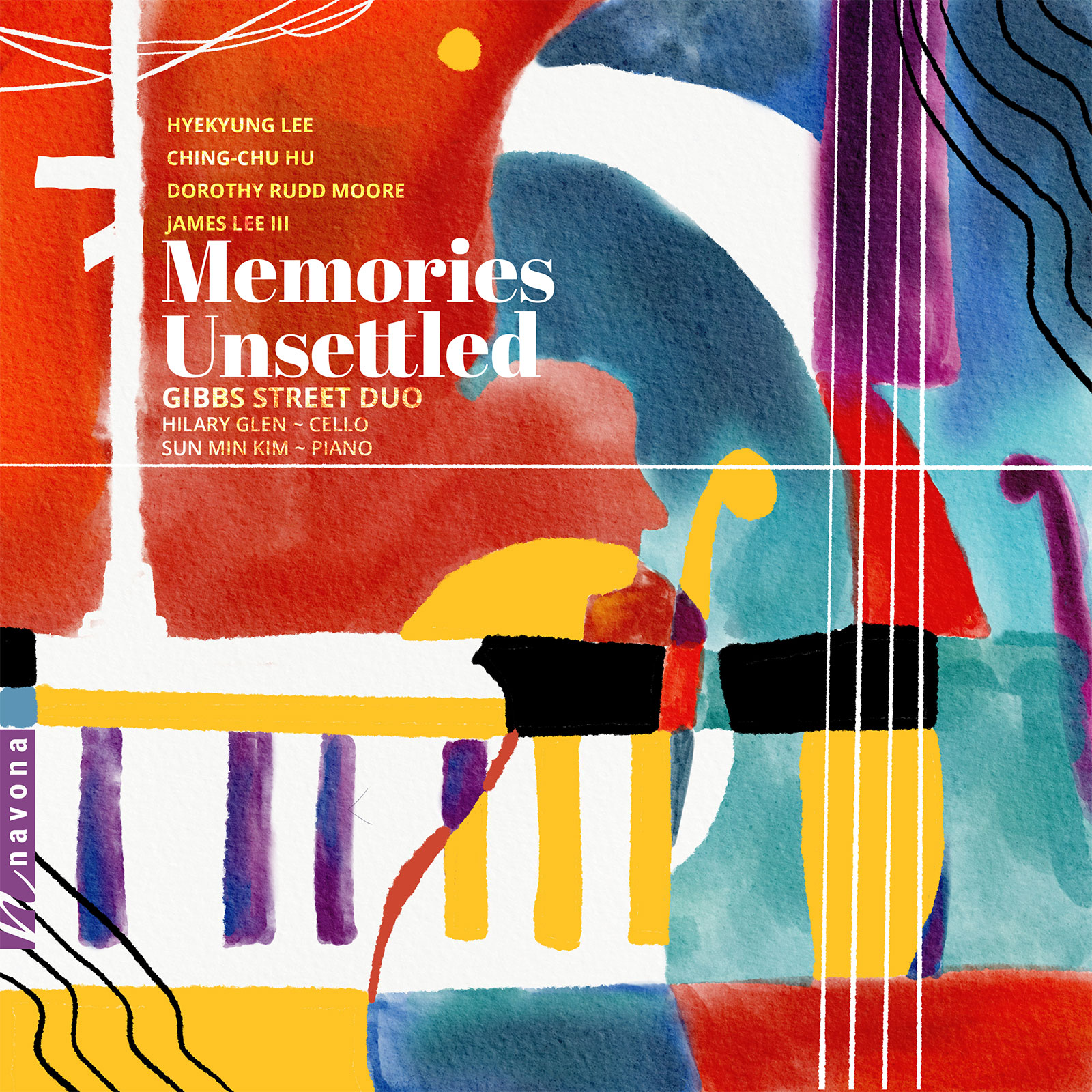 MEMORIES UNSETTLED explores music that has too often been marginalized from the historical musical canon. Sun Min Kim and Hilary Glen joined forces during the height of the pandemic, forming the Gibbs Street Duo. This piano-cello duo tours colleges and universities across the country, sharing their inspiring music with students, faculty, and other patrons of the arts. The album features composers from diverse backgrounds including Dorothy Rudd Moore, James Lee III, Ching-chu Hu, and HyeKyung Lee. Moore’s Dirge and Deliverance is a sonata in two movements written in 1971 that uses music to reflect on the Black experience in 1960s America. Abraham’s Sons written by James Lee III was written in 2013 to express horror and outrage at the killing of Trayvon Martin. Through these pieces and more like them, the Gibbs Street Duo demonstrate the power and relevance of music as a catalyst for change.

This album is funded by Denison University Research Grant. 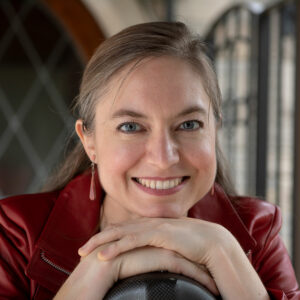 Hilary Glen, cellist, has been praised as a “standout performer” who has successfully “taken on the demanding and most expressive responsibilities assigned to [her] instrument.” As an enthusiastic performer, she enjoys a varied career that has taken her from the Italian Alps to Carnegie Hall and many places in between. She has collaborated with musicians including Gil Shaham, Gary Hoffman, Yefim Bronfman, and The Who. Formerly a cellist with the New World Symphony, Glen currently performs as the Assistant Principal in the Atlanta Opera Orchestra, Principal of the Columbus Symphony Orchestra in Georgia, and is a section member of the Atlanta Ballet Orchestra and the Des Moines Metro Opera. 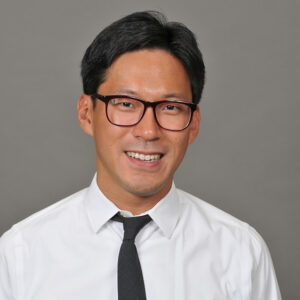 South Korean pianist Sun Min Kim serves as Coordinator of Keyboard Studies and Assistant Professor of Music at Denison University. He made his debut with the Ulsan Symphony Orchestra at age 13, performing Grieg’s Piano Concerto. He has been a prizewinner of national and international competitions such as the Maria Canals International Piano Competition, MTNA, and International Crescendo Music Awards. In 2008, the professional music fraternity Mu Phi Epsilon awarded him the Sterling Achievement Award, the highest honor that the fraternity bestows upon its collegiate members. As a laureate of various awards, he debuted at Carnegie Hall’s Weill Recital Hall, Merkin Concert Hall, and other prestigious venues across the United States and abroad.

The Gibbs Street Duo was formed in June 2020 with the intent to seek out, explore, and introduce music of historically-marginalized composers to the musical canon. During the height of the pandemic, the duo focused their energy on presenting their ideas about this recording project at national conferences and various institutions of higher education around North America. Currently, the Gibbs Street Duo is touring colleges and universities across the country to share this inspiring music with students, aficionados, and other music professionals.

An active composer and pianist, HyeKyung Lee has written works for diverse genres and media: from toy piano to big concerti, from electronic music to children’s choir, and film scores to percussion ensembles. Recent commissions are just as diverse, including the prestigious Bonnie McElveen Commission for Maestro Gerard Schwarz and the Eastern Music Festival, a work for the Renée B. Fisher Piano Competition, and a showpiece for the Meg Quigley Vivaldi Bassoon Competition.

Lee’s music has been described as a “virtuosic fantasy where continuous rhythmic motion smoothly join[s] contrasting moods” and as “showing a penchant for colorful timbers, expressive lines, and lively rhythmic interaction of instruments.” She has written many duets for varied solo instruments with piano, including trumpet, clarinet, contrabass flute, viola, violin, cello, bassoon, and saxophone. Born in 1959 in Seoul, South Korea, Lee studied first at YonSei University in Korea, then later at the University of Texas at Austin, where she completed a D.M.A. in composition and simultaneously pursued and received a piano performance certificate. She is an Associate Professor at Denison University in Ohio.

Born in Iowa, Ching-chu Hu studied at Yale University, Freiburg Musikhochschule in Germany, the University of Iowa, and finally the University of Michigan for his D.M.A. Currently, he is an active professor, pianist, and conductor. Recent projects include performances of a live soundtrack to Charlie Chaplin’s 1925 version of The Gold Rush for symphony orchestra, and a soundtrack to Loose Film’s award-winning Among Other Things.

Honors include being named the Aaron Copland Fellow at the MacDowell Colony for the Arts, composer-in-residence at the Piccolo Spoleto Festival, guest composer at the American Music Week Festival in Sofia, Bulgaria, and winner of various competitions, including the 2018 American Prize for Chamber Music. He is Director of the Vail Series and is the Richard Lucier Endowed Professor of Music at Denison University in Ohio, where he founded the TUTTI Festival, a week-long celebration of new art.

Dorothy Rudd Moore was born into a musical family in New Castle DE in 1940. Her mother was a singer and amateur pianist; from an early age, Moore had encouragement and enjoyed making up her own melodies and songs. As she aged and these musical talents became more apparent, her parents made sure she received a formal musical education, and she went on to major in music at Howard University while also studying privately with Nadia Boulanger. Upon finishing studies in France, Moore moved to New York City, where in 1968 she co-founded the Society of Black Composers.

In formal composition, Moore admits being influenced most heavily by the odd couple of Johann Sebastian Bach and Duke Ellington. She is known for using compositions to express her reactions to the racial tensions taking place in the 1960s and 1970s, and while a great many of her works remain unpublished, she is recognized as one of the leading female composers of color in the 20th century. Despite her pedigree, talent, and passion, she never received a full-time teaching position in the United States, instead spending stints at Harlem School of the Arts, New York University, and Bronx Community College.

James Lee III, born in 1975, graduated with a Doctor of Musical Arts degree from the University of Michigan in 2005. A self-professed Adventist, Lee takes every opportunity to explore biblical, spiritual, and sacred themes in his compositions, and he takes care to interweave these themes with African American motifs, sounds, and influences. Lee’s orchestral works have been commissioned and premiered by the National Symphony, Detroit Symphony, Baltimore Symphony, Chicago Symphony, Boston Symphony, Cincinnati Symphony, and others.

With more than 80 works written and 14 new works due to be premiered, Lee remains busier than ever. Most recently in the 2021-2022 season, A Double Standard for Karen Slack, soprano, and the Pacifica String Quartet premiered in May at Carnegie Hall;  Amer’ican, was premiered by the Detroit Symphony in October; the Calyx Piano Trio premiered Tones of Clay at Tanglewood in November; and shortly thereafter the Saint Louis Symphony performed Emotive Transformations.

Distant Memories dates to 2015 and exists in three versions, piano with either violin, viola, or cello. Here, of course, we have the piece presented in a single movement for piano and cello. About the work, Lee comments: “Some memories are vague, some are blurred, and some are even absent. Some memories are distant, but still stay vivid and evoke various emotions of that time. The piece utilizes the uneven repetitions of the notes, fluctuating arpeggios, and frequent changes of the meter and keys [to] explore distant memories of the past.”

Dream and Variations was written in 1974 and is one of Moore’s major piano works. It has an introduction, theme, and six variations, which showcase athletic pianism full of fast octaves, dense chords, jumps, double-thirds, and double-sixths. While individual variations are wildly different from one another in character, Moore maintains cohesiveness through thematic connections presented as a whole or in fragments. The challenge for a pianist is to suddenly shift gears between variations as the piece traverses the titular realms of dreams and nightmares.

Abraham’s Son (In Memoriam: Trayvon Martin) is a work for solo cello that Lee composed in 2013 as a reaction to the tragic and unjust death of Trayvon Martin. About this piece, Lee said: “the work is rhapsodic and traverses contrasting elements of Trayvon Martin’s youthfulness and the seriousness of the circumstances that led to his death.” Listen especially for the last minutes, which juxtapose discordant double stops, upper register glissandi, and pizzicato or strumming passages illustrative of the contrasting elements Lee described.

Dirge and Deliverance for cello and piano is a sonata in two movements written in 1971 for Moore’s husband, cellist Kermit Moore. The piece premiered in Alice Tully Hall at Lincoln Center in New York City. This music reflects on black existence and experience in 1960s America; the piece deliberately presents to listeners various musical representations of the struggle and turmoil of the era. With solo passages for piano and cello interspersed throughout the sonata, both instruments traverse an impressive range. The second movement, “Deliverance,” includes a lengthy solo section for cello in which we can hear existential turmoil internalized before the piano joins the fray; only in the final measures of the piece is there any sense of resolution, and what we do hear is fleeting, at best.

The two movements of Night for cello and piano present vivid and distinct reflections on the mind’s and body’s struggle to find repose and security when the cares of the day, and the possible dangers of the dark, intrude upon the stillness of the nighttime hours. In the first movement, “Slumber,” the fluid arcing lines in the piano elicit high, breathy answers from the cello, a call-and-response that we hear as if through the surreal fog of fitful dreams. Rhythmic gestures stretch, shrink, and tumble across an ambiguous temporal plane. Occasionally the piano gestures more assertively with insistent repeated chords, but those sharp strokes quickly morph into subtler shades. They eventually thin down to a few hushed, rising, ringing piano notes, gently pulled upward by the faint glimmer of the cello’s final sustained note, suspended like a translucent thread strung along the ledger lines.

In the second movement, “Tossing and Turning,” the psychic stirring turns kinetic. It starts out with punchy chords and pizzicato—no cradled curves. These frustrations build to a disquieting climax of stammering marcato chords in the piano, after which the cello seems to meander downward, exhausted. Just as this torpor turns somnolent, however, the cello succumbs to quiet, jittery, intrusive thoughts that eventually spiral again into full-blown agitation: angry octaves in the piano, swirling polyrhythms between the cello’s leapfrogging triplets and the piano’s churning hemiolas and syncopations, and finally, noisy exclamations of resignation. It’s tempting to hear the closing gesture, unison sforzando eighth notes on D, dropping abruptly across a four-octave span, as a sarcastic good night!