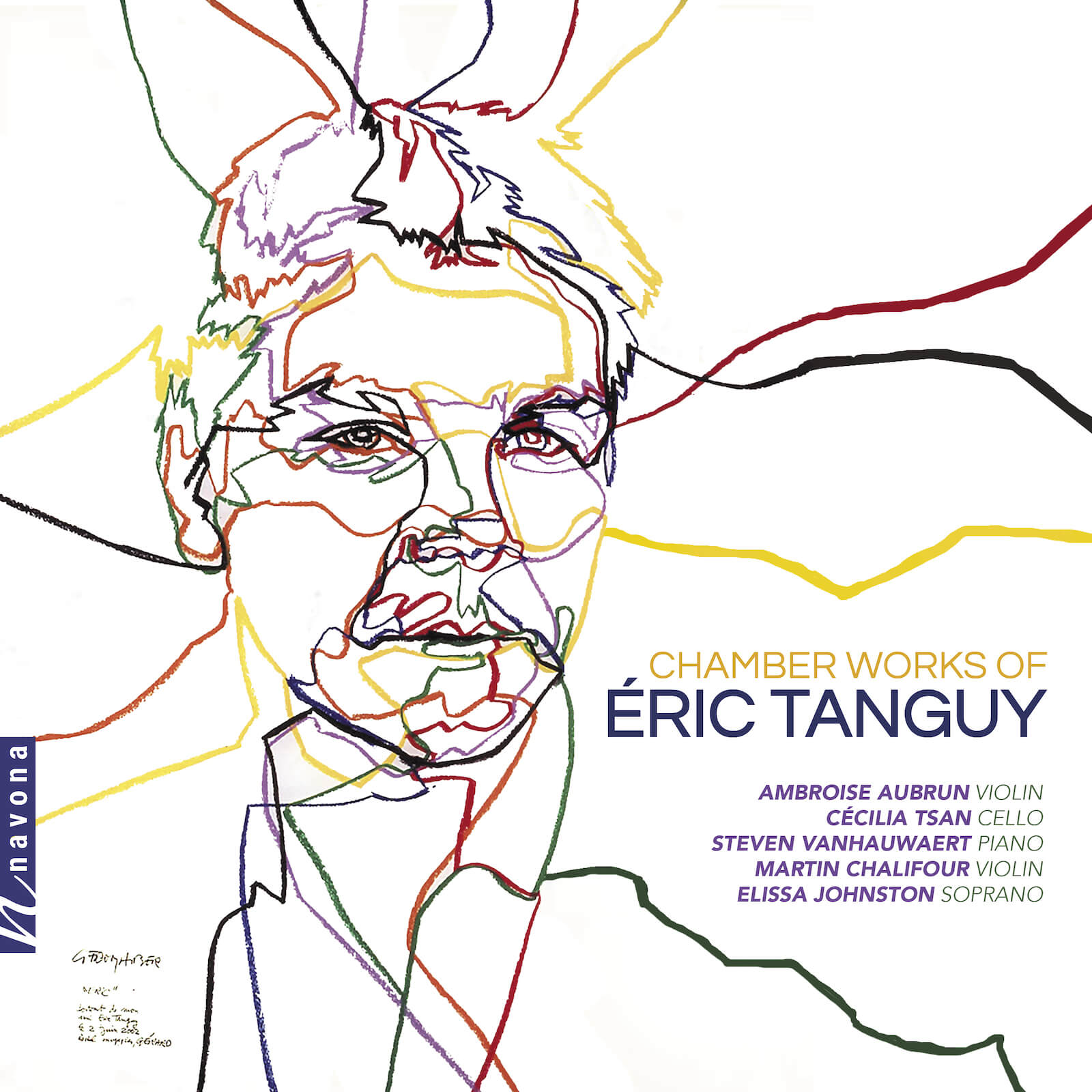 CHAMBER WORKS OF ÉRIC TANGUY from Navona Records and composer Eric Tanguy delivers three world premiere recordings and a curated selection of the composer’s chamber pieces that demonstrates his illustrative style of punctuated modality. Brought to life by talented artists Ambroise Aubrun (violin), Cécilia Tsan (cello), Steven Vanhauwaert (piano), Martin Chalifour (violin), and Elissa Johnston (soprano), these seven pieces reflect many years of past collaboration amongst the performers resulting in a connection that is translated through thoughtful yet intense musical stylings. Tanguy’s ear-catching melodies and personalized compositions foster a sound quality that showcases the strengths and dexterity of the performers, all the while providing a stimulating and intimate listening experience.

Warm thanks to the friends of the Long Beach Symphony who generously contributed to this album. Special thanks to the University of Nevada Las Vegas, Jim Eninger and the Rolling Hills United Methodist Church. 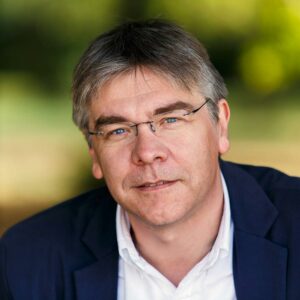 Born in Caen in 1968, Éric Tanguy is to this day one of the most performed French composers in the world. Named “Composer of the Year'” by the Victoires de la musique classique in 2004 and 2008, Tanguy studied under Horatiu Radulescu, Ivo Malec, Gérard Grisey, and Betsy Jolas at the Conservatoire National Supérieur de Musique in Paris.

My first encounter with Cécilia Tsan goes back to the last century. At that time, I still was a simple student in Normandy and Cécilia was starting an impressive career as a soloist and chamber musician. In the meantime, everyone was steering their musical boat and then, through the magic of luck, we happily reconnected at the end of the 2000s. Cécilia had transposed her existence to California while remaining closely linked to French and European musical life. As far as I was concerned, I had developed an intense activity as a composer throughout the world. We saw each other again in Paris and Cécilia was eager to ask me to write a trio for violin, cello, and piano. After much hesitation — because I said to myself that after Schubert, Brahms, Ravel, Shostakovich, Takemitsu and a few others, the task would be particularly arduous — I accepted her offer.

It was the beginning of an intense and magnificent musical endeavor and multiple concerts throughout the last decade. After playing the world premiere of my trio at Radio France in Paris in 2012, Cécilia gave its American premiere the following year in the Jacaranda concert series in Santa Monica CA. It was an opportunity to collaborate with wonderful pianist Steven Vanhauwaert and later to meet fantastic violinist Ambroise Aubrun. It was also an immense joy, for my Two Violin Sonata, to see again Martin Chalifour, Concertmaster of the prestigious Los Angeles Philharmonic: I met him at Walt Disney Hall in 2016 during the concerts of the LA Philharmonic that included my piece Affettuoso, conducted by Esa-Pekka Salonen. Finally, another great joy in 2021: virtually meeting (because the pandemic did not allow transcontinental travel) soprano Elissa Johnston, during a Skype rehearsal of my piece for soprano and cello, Le Lys et la Lyre, shortly before it was premiered at Mount Wilson Observatory.

The program of this album therefore includes seven of my pieces (trio, duos, solos). Each of them illustrates what characterizes my work as a creator, especially on the matter of pitches, harmony, melodic scansion, research in rhythm and form. I develop my music with a constant desire for consonance which nonetheless is not based on the concept of ​​tonality but really of modality. From the bottom of my heart, I would like to thank Cécilia, Steven, and Ambroise who are at the center in making and producing this album, as well as Elissa and Martin, for their fabulous artistic contribution to this project.

This work is the fruit of an intense, friendly, and spiritual dialogue with Tsan, whose incredible family history had overwhelmed me. Before writing the score and throughout our exchanges, I began to perceive and to take notes in the form of sketches, of certain specific sonorities which also enabled me to imagine the construction of the piece and to prepare for this inner journey.

In one movement, the Trio is articulated around a principle of a quasi continuous variation on a small motif of six notes. This motif also generates all the harmony on which the work will unfold through a process of transformation of the musical material.

I wanted to punctuate the piece with some very expressive solos and duets conceived as extensions, disappearances, or anticipations of the numerous trio sequences. The work is very fondly dedicated to Tsan, who performed its World Premiere with Stéphanie-Marie Degand and Marie-Josèphe Jude on June 26, 2012 at Radio-France in Paris.

Commissioned by the Festival des Arcs.

When violinist and artistic director Éric Crambes asked me to compose a new work for his festival, the idea of ​​a score for two violins immediately came to mind. Several reasons explain this choice — as an ex-violinist, throughout my learning years as an instrumentalist I had felt an intense joy in the musical sharing with my violinist friends in the performances of masterpieces such as Vivaldi and Bach Double Concertos. But later, when I discovered the fabulous Sonatas for two violins by Jean-Marie Leclair, I felt, in this instrumental duality, another way of imbrications or dialogues. These specific memories therefore particularly struck me because with the idea of ​​composing my sonata, there was a desire to offer “an echo” to this singular musical combination, in our time, in the language that I had developed for many years.

The work is built in three separate movements, each based on a specific harmonic mode. There are no subtitles for these movements, only a specific tempo implying different figures, associated with the musical and poetic character of the music.

Through the different registers, the first movement uses the superposition of figures of syncopations, quarter notes and eighth notes, creating an obsessive feeling both from the point of view of the pulsation but also in the short melodic elements. By contrast, these obsessive fragments are sometimes interrupted and resolved in dazzling flights of triplets.

The second movement aims to develop images of suave and melancholy embraces between the two instruments, counterbalanced by a solo given at a distance of six bars to the two violins.

The third movement, especially lively, develops the idea of ​​escapes, pursuits, games of responses and of melodic formulas accompanied by one or the other, all in a sort of frenetic whirlwind. The Sonata for Two Violins is dedicated to Eric Crambes and David Grimal, who gave its world premiere in Hauteville-Gondon on July 21, 2011.

Commissioned by the BBC and the Royal Philharmonic Society.

The title obviously refers to Brahms’ Intermezzi, whose extraordinary expressiveness specially impressed me, both by the strength of the musical language and by the economy of means. In writing these Intermezzi, I therefore did not seek to replicate the magic of the Brahmsian style, but I tried through concise and less complex forms than the ones I used in my two piano sonatas to translate very directly a poetic singular music based on rigorous harmonic, melodic and rhythmic work. I would add that each of these four pieces have a defined character directly linked to the nature of the used musical material.

Premiered by Ashley Wass on July 16, 2004 at the Cheltenham Festival, England.

The score is the result of a specific request from Steven who wanted to give a recital solely of studies. Since I had already composed Deux Etudes in 1993, the title, Nouvelle Etude, was completely meaningful. So I worked on a very simple principle of transforming an initial motif through harmony, registers, and dynamics. Thus, this element is perceived in very different ways depending on the variation of these few parameters. It is a short, rhythmic, and joyful piece, premiered in June 2015 at Walt Disney Hall in Los Angeles by Steven Vanhauwaert, to whom the score is dedicated.

The piece was written in memory of composer Dominique Troncin, a former classmate at the Paris Conservatory.

In this short and intense piece for solo violin, I wanted to express all the sadness and rage I felt at the sudden loss of a friend and colleague. Therefore it is not a peaceful elegy. The score features a sort of micro-concerto for solo violin, with a very tormented aspect, through its three linked sections (Vif-lent-vif). It was premiered on February 7, 1995 at Radio-France by Jean Tuffet.

The score was composed at the request of Claude Samuel for the 9th and last Rostropovich International Cello Competition in Paris. The work is divided into three distinct sections, each of which is a unique transposition of an original mode solely based on intervals of minor seconds, major seconds, and minor thirds. These three parts alternately express specific musical characters; first of all lyrical until the incantation, then meditative and poetic, and finally virtuoso and jubilant. With a constant in the alternation of binary and ternary elements, which thus creates a particular scansion. Throughout the piece, I established a strong polarity around the note “Ré (D)”, creating a symbolism with Rostropovich’s “R.” Mstislav Rostropovich commissioned and premiered my Concerto for Cello and Orchestra No. 2. He performed it several times in 2001 and 2002 (with the Boston Symphony Orchestra and Seiji Ozawa at Boston Hall and in New York at Carnegie Hall).

It was premiered by the Rostropovich Competition candidates in November 2009.

This is the second score premiered by Tsan and once again, connected to her family history. In fact, the great Franco-Chinese writer and poet François Cheng, a member of the iconic Académie Française once close to her parents, one day offered her a poem, calligraphed it and later published in his book Five Meditations on Death (Albin Michel editions). Tsan suggested my name to François Cheng to write some music on this poem and asked me to compose “a pure melody for the voice and a simple counter melody for the cello.” To me, it is exactly what stands out from this composition, first inspired by the great beauty of the text and the musicality of the words, but also by this desire for clarity as well as melodic and harmonic simplicity. Therefore, it must be heard as a great chant with two intrinsically linked voices. Informed of the start of the project, François Cheng wanted to make some slight changes to his original poem which I, of course, included into my piece. The work is dedicated to Tsan, and was premiered August 1, 2021 by Elissa Johnston and Cécilia Tsan at Mount Wilson Observatory in Los Angeles.

Le Lys et la Lyre (The Lily and the Lyre)

Carnal soul, that basso continues in each of us
When the touch of another makes it
Vibrate, resonate

Isn’t being this very music
That since the beginning
Seeks to be heard
That waits
Each moment of each day
And each day of a lifetime
For the hand to finally know how to touch the lyre?