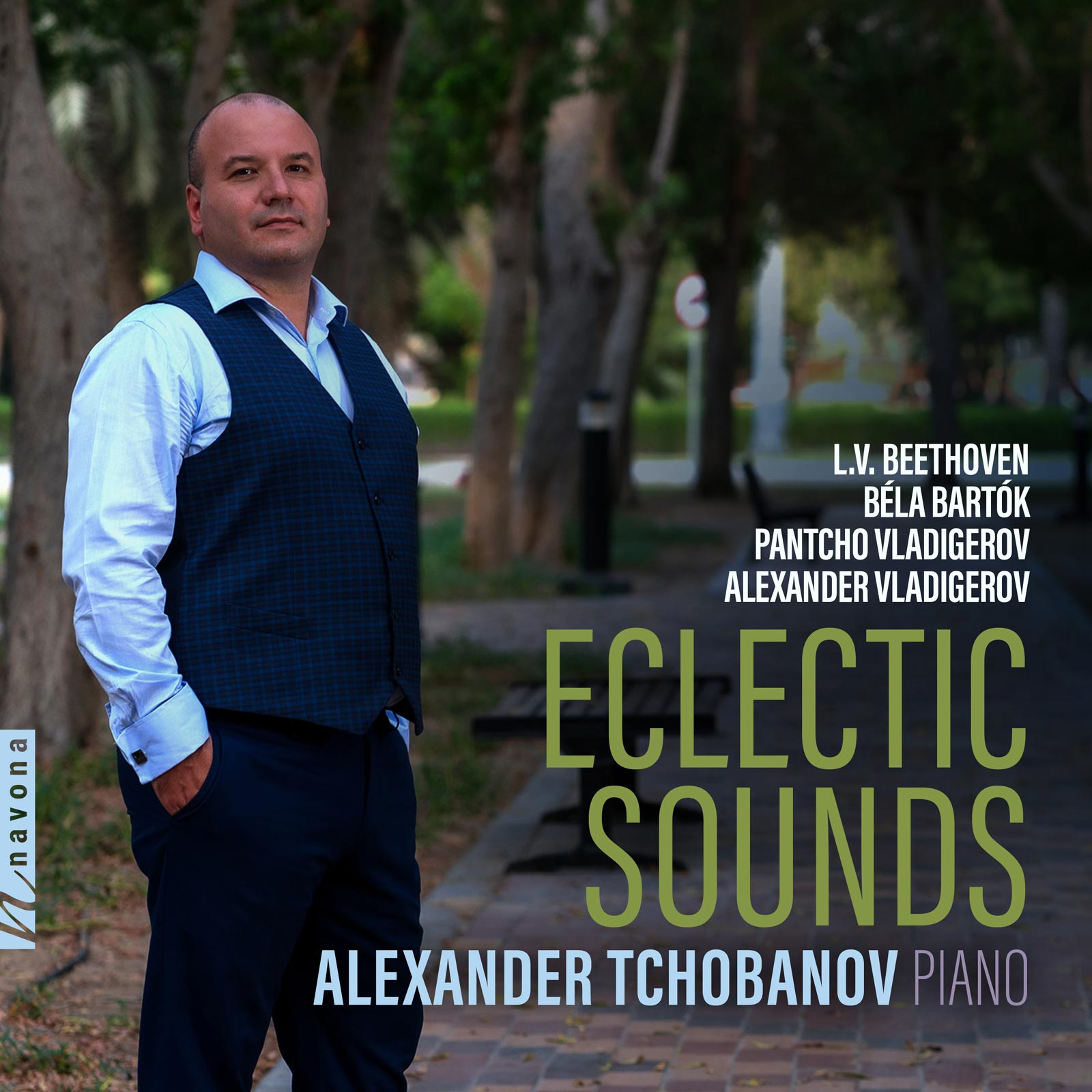 What do Beethoven, Bartók and Bulgaria’s national composer Vladigerov have in common? This is the question posed by Bulgarian pianist Alexander Tchobanov on his new album ECLECTIC SOUNDS – and what appears to be a harmless question soon turns into a mighty quest.

Contrasting Beethoven’s Piano Sonata No. 30, a selection of beloved works by Bartók as well as two pieces composed by a Vladigerov – one by the father, one by his son -, the answer is quickly elucidated: the common denominator between these works is their inner drive, their lucidity, their monumental precision. Performed with an ambitious blend of vigor and exactitude, Tchobanov unveils their inner workings with previously-unheard, razor-sharp clarity.

Recorded on a Steingraeber & Söhne piano
Photos by Jonathan Penunia

Acknowledgements
The album is dedicated to my mother Eva Boyadjieva (my biggest fan and supporter), my wife Pamela, and my son Adrian.
In memory of my father Krastuy Chobanov (1943-2022)
– Alexander Tchobanov 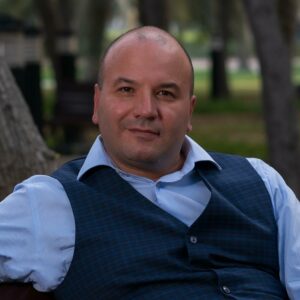 Alexander Tchobanov has gained international recognition as a concert pianist, recording artist, chamber musician, and music pedagogue. Following his 2013 Carnegie Hall solo debut, the New York Concert Review wrote, “Mr. Tchobanov's colors and voicing were superb, creating that ineffable aura of Russian sadness we love so much, there is a major virtuoso there.” He was invited to perform at major international venues and festivals such as Jordan Hall in Boston, Steinway Hall in New York, Los Angeles Music Center, Manila Piano Artist Series, Auersperg Palace in Vienna, Madinat Theater in Dubai, International Piano Festival “Krystian Tkaczewski’’ in Poland, and CME Concerto Fest among others. Tchobanov's recordings of works by Scriabin and Rachmaninoff are commercially available on the Ulysses Arts label. He was featured as a soloist with Vienna Residence Orchestra and Tarnow Chamber Orchestra.

Ludwig van Beethoven’s Piano Sonata No. 30 in E Major, op.109, composed in 1820, is his antepenultimate piano sonata. It is one of his most intimate, innovative, and profound works, dedicated to Maximiliane Brentano, daughter of his friend Antonie Brentano. Some scholars claim, despite the lack of evidence, she was the composer’s ‘’immortal beloved.’’ This sonata is more lyrical than dramatic in character, with a melodic and harmonic beauty which seems to anticipate Chopin. In this sonata, as in many of Beethoven’s late works, one diatonic interval is recurring throughout: the interval of a third. Opus 109 demonstrates some very interesting innovations. For example, the first moment is extremely short and contains little thematic development. Moreover, Beethoven decides to insert a scherzo as a second movement, which is another unusual step. This shifts the focus to the last movement (a theme with variations) making it longer than both the first and second movements combined. Here we see some of Beethoven’s most beautiful and intense writing. It contains a quartet-like theme, which at first is transformed into a waltz, and then later, a complex choral-like fugue. A masterpiece indeed!

Hungarian composer Béla Bartók (1881-1945) dedicated much of his life to researching folk music. As a result, he developed a personal folk-derived style, which was unique among 20th-century composers. The piano sonata, Sz.80 was written in 1926 at a time when Bartók was absorbed in the study of Renaissance, Baroque, and Classical forms. The first movement (“Allegro moderato”) contains driving ostinato chords in the left hand, pungent dissonances, an extensive array of rhythmic inventions, folk-flavored themes, and drumming effects. The declamatory second movement (“Sostenuto e Pesante”) demonstrates four-part chorale writing combined with Bartók’s distinctive rubato features. One might also detect the presence of distant church bells and ritualistic chants. The third movement (“Allegro Molto”) is a vigorous Rondo with variations, which contains cheerful and authentic folk tunes, fresh from the fields of Transylvania.

The Six Dances in Bulgarian Rhythm is the last set of pieces in the final book of Bartok’s Mrikrokosmos. As indicated in the title, the dances are based on a variety of irregular rhythms that are widely popular in Bulgarian folk music. The melodies, however, are completely original. Each of the dances uses a unique rhythmic pattern to give each piece a distinctive character. Bartok applies key signatures such as 9/8 and 8/8, which he groups in a typical Bulgarian Folk fashion: 4+2+3 and 3+2+3. Tonally, the dances make frequent use of “Bimodalism”—a technique where the composer creates music in two keys at the same time.

Pantcho Vladigerov (1899-1978) was one of the most significant Bulgarian composers of the 20th century. His compositions contain elements of Bulgarian folk song, rhythm, modes, and ornamentation. Vladigerov premiered the Three Pieces for Piano op. 15 in Berlin in December 1922. They have become some of the composer’s most important piano works. These three pieces indicate strongly that Vladigerov was very much influenced by music from the Romantic and Impressionistic periods. The first of those pieces is the Prelude, op 15 No.1, which has been presented on this album. Its main theme, marked by Vladigerov “Cantando e molto appassionato,” is both emotional and lyrical in nature. In addition, Vladigerov exploits many technical devices in the style of Rachmaninoff, Liszt, and Tchaikovsky. The work has several climactic points and uses the full dynamic range of the keyboard from pianissimo to fortissimo.

Alexander Vladigerov (1933-1993) studied composition with his father Pantcho Vladigerov as well as conducting with Nathan Rachlin in Kiev. He was ferociously promoting George Gershwin and American Jazz in Bulgaria at a time when such artists were persecuted by the Communists for similar activities. Vladigerov’s epic piano masterpiece Dilmano Dilbero Variations op. 2 (composed 1954), is based on the popular Bulgarian folk song by the same name. Its lyrics come from everyday life: “Dilmano Dilbero (a girl’s name), tell me how the peppers are planted” (the main lyrics). This incredible set of nine variations displays beautiful melodies combined with rich harmonies and energetic, syncopated rhythms. Its moments of drama, improvisation, and brilliance make it an attractive choice for any pianist.