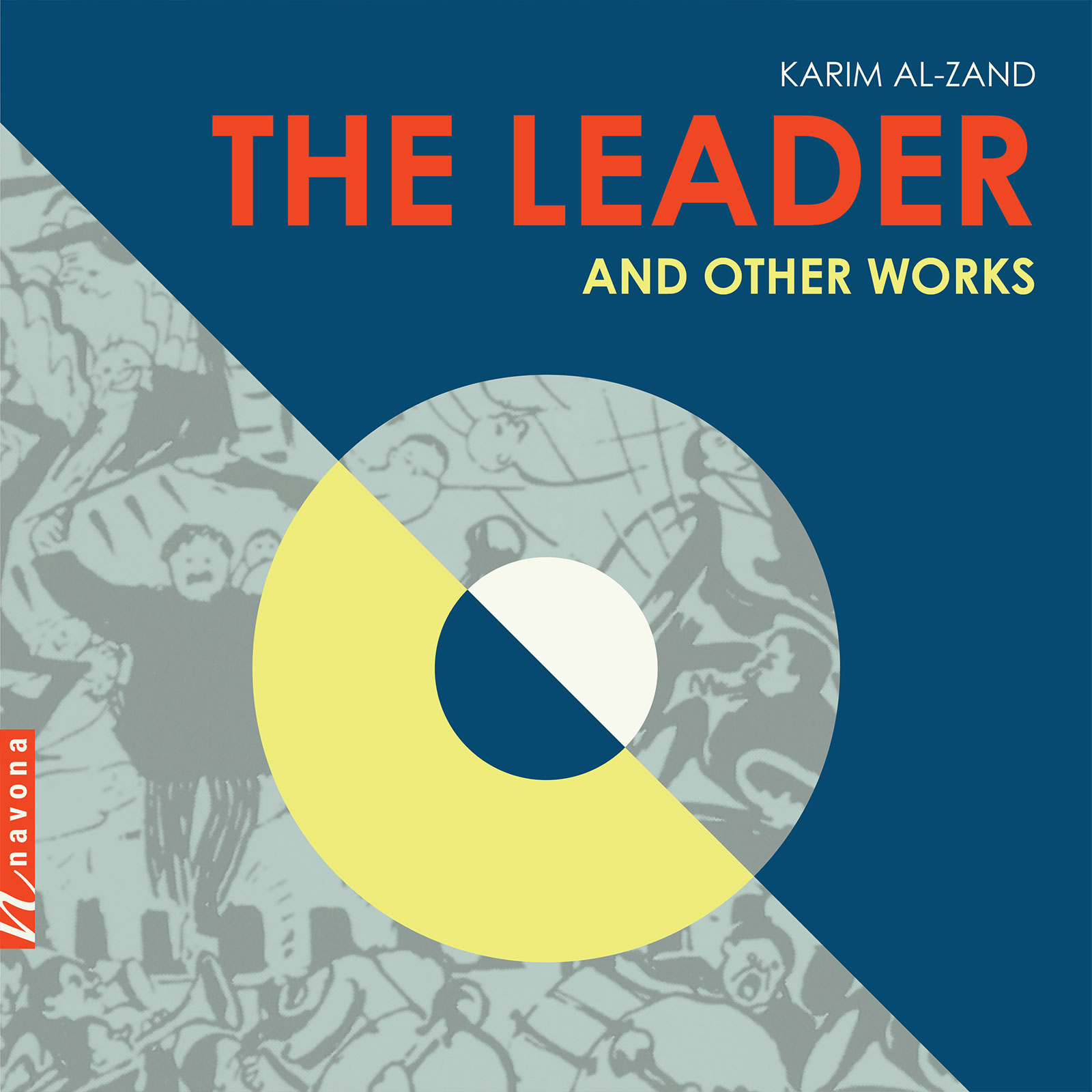 THE LEADER from Canadian-American composer Karim Al-Zand is at once timeless and also deeply relevant for the age we live in. A commentary on the rise of fascist tyranny, its titular piece tells the story of a buffoonish charlatan who is adored despite his ridiculous behavior, echoing concerns of the modern day in this chamber opera based on Eugene Ionesco’s 1953 satire Le Maître. Another vocal work, Songs from the Post Truth Era similarly comments on the political realities (or unrealities) of our time. The album features several other chamber works by Al-Zand including his Six Bagatelles, with music inspired by the art of Robert Motherwell (1915–1991). 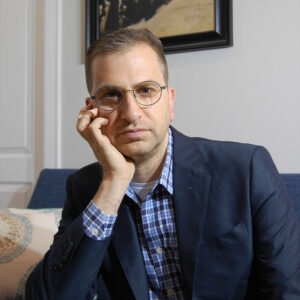 The music of Canadian-American composer Karim Al-Zand (b.1970) has been called “strong and startlingly lovely” (Boston Globe). His compositions are wide-ranging in influence and inspiration, encompassing solo, chamber, vocal, and orchestral works. From scores for dance, to compositions for young people, to multidisciplinary and collaborative works, Al-Zand’s music is diverse in both its subject matter and its audience. It explores connections between music and other arts, and draws inspiration from varied sources such as graphic art, myths and fables, folk music of the world, film, spoken word, jazz, and his own Middle Eastern heritage.

The Leader is a chamber opera based on Eugène Ionesco’s Le Maître, a one-act political satire from 1953. Its characters worship a buffoonish “great man,” a charlatan they adore despite his ridiculous behavior. The work is at once a comedy and a sobering parable about despotism and free-thinking—one as relevant today as ever. Scored for five voices and large ensemble, the absurdist romp is a trenchant commentary on the casual rise of tyranny.

The original production featured unique reversible sets designed by architect Jesús Vassallo and additional scenic projections by director Cara Consilvio. The opera was produced in February 2020 at Opera in the Heights, conducted by Eiki Isomura. 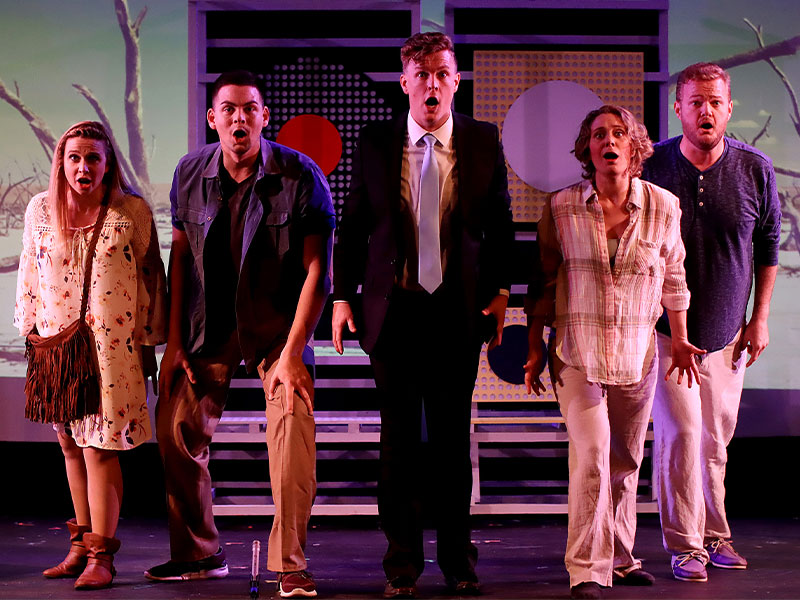 The Announcer and two Admirers are chasing the Leader. Apparently he is nearby, but the trio always seem to arrive a moment too late. Though he eludes them, they yearn to be in his presence. They fervently worship him from afar, following his every action with rapt attention. Meanwhile, two Lovers court and profess their mutual affection. As the Leader finally approaches, the anticipation builds and the Lovers are swept up in the frenzy. The Leader is coming: his imminent arrival is hailed with increasing zeal.

On its surface, Eugene Ionesco’s The Leader is a comedy: its situations are farcical, its action is madcap, and its cast is full of caricatures worthy of opera buffa. The Announcer and Admirers, in their adulation, repeat the same words over and over, platitudes echoed by mindless followers. Their behavior is preposterous, yet their fervor seems all too familiar.

As is common in the so-called “theater of the absurd,” The Leader achieves its effect not through plot or character, but through exaggeration, and a kind of parody that forces us to reckon with our own sense of the world and its predicaments. The play was published in 1953, six years before Ionesco’s best known work, Rhinoceros, but shares with the later play its satirical tone, allegorical character, and underlying political critique. Together the plays are often read as a commentary on the rise of fascism in the lead-up to World War II, and a mockery of its dangerous and charismatic leaders. But the cautionary message of Ionesco’s play is as relevant today as ever. The Leader lays bare the cult of personality which accompanies despotism. It inveighs against mob mentality and mass conformity. The cloud of uncertainty with which the play ends shows us the result of such tendencies, and serves as a rallying cry for reason and individual thinking.

Six Bagatelles is inspired by the art of Robert Motherwell (1915–1991). The six short pieces which make up this trio for piano, violin, and cello are each named after an image by the American abstract artist. The prints were chosen for their vibrant and contrasting color and their strong iconic character. The bagatelles sometimes depict the artworks musically, but more often spring from subjective impressions of them—their atmosphere, mood, emotion or “feel”—or occasionally from a particular technical device the artist uses. Motherwell once remarked: “Make no mistake, abstract art is a form of mysticism.” Modern concert music can be similarly mystical: its “meaning” shrouded, its gestures symbolic, and its narrative highly interpretive. Six Bagatelles centers around this elusive (and allusive) aspect of music and art.

“Mezzotint in Indigo” is part of Motherwell’s Open series, which makes use of vivid color backdrops to a rectangular shadow-like line. The bagatelle has the strings form a vibrating backdrop, while the piano “carves up” the musical space with a line of stark chords. A tinge of the blues in this bagatelle reflects the association of “indigo” with Ellington’s classic masterpiece Mood Indigo.

The central figures of “Orange Lyric” are typical of Motherwell in their thick brush technique, and pliable calligraphic lines. The bagatelle is lyrical as well, in the violin, while the piano offers curved arabesques.

“Gauloises Bleues” is another iconic Motherwell image. The paper packaging for Gauloises cigarettes, with its pale “French blue” color, were a constant fascination for the artist. The brand, smoked by the likes of Satre, Picasso, Brigid Bardot, and John Lennon, symbolized a hip, cosmopolitan Parisian vibe. Musically, the piano is cool and detached here, unmoved by the café groove in the strings.

“Yellow Chord” uses a single harmony and figure in the piano, repeated trance-like, while the strings sing stirring echoes of one another.

“Three Forms in Red”—both the print and the bagatelle—presents three contrasting gestures side-by-side.

The last image reverts to black, part of a series of book prints the artist made for a volume by Octavio Paz. The bagatelle “Black Elegy Returning Black” is designated a nocturne, a title Motherwell also used frequently. The piece makes veiled reference to Chopin’s Nocturne Op. 27/1, in the manner of an artistic collage. Six Bagatelles was commissioned by Carrie Shoemake for the Houston presenting organization Musiqa, in memory of Ed Shoemake.

Songs from the Post-Truth Era

Songs from the Post-Truth Era is a short song cycle based on a poem about telling the truth. “Incorrect Speaking” by Charles Lamb, is a didactic verse taken from the authors 1809 collection Poems for Children. Lamb’s poem is used as the first song’s text. The text for the following two songs are derived as “vocabularyclept” poems, a technique that preserves all the words from an original poem, but rearranges their order and syntax. The new poems, “The Charm of Anna” and “The Supply of Flies,” generate unexpected, humorous, and contradictory meanings—and eventually produce no meaning at all. Songs from the Post-Truth Era was written for Pushback Collective (Ally Smither, soprano; Ben Roidl-Ward, bassoon).

Capriccio No. 5 and Capriccio No. 6 are part of a gradually accumulating set of works for solo violin begun in 2002. Many of them are the product of requests for short recital pieces from students of the late Kenneth Goldsmith, a former colleague at the Shepherd School of Music. Ken was a passionate champion of new music and his students have continued his advocacy of contemporary works.

Capriccio No. 6, written for Matthew Detrick, is an off-kilter reel in a meter of 5 beats, using slides and open strings.

In early music, a “ground bass” (or simply, a “ground”) is a composition built upon a repeating melodic phrase or harmonic progression. Stomping Grounds comprises four diverse character pieces, each one using a repeating rhythmic idea as its musical basis.

The first movement, “hop|skip|jump,” is playful and animated, with a fanfare-like theme and a persistent seven-note chord that serves as the movement’s musical “clock.” Behind its exuberant surface is a fourteen-beat rhythmic scheme (2+3, 2+3, 2+2) that is followed throughout.

The second movement, “dog days dirge,” is slow and languid, the instruments seeming to move as little as possible. The piano repeats thick chords in a pattern which moves ever-so-slowly, while the violin and clarinet echo each other’s motives lazily. 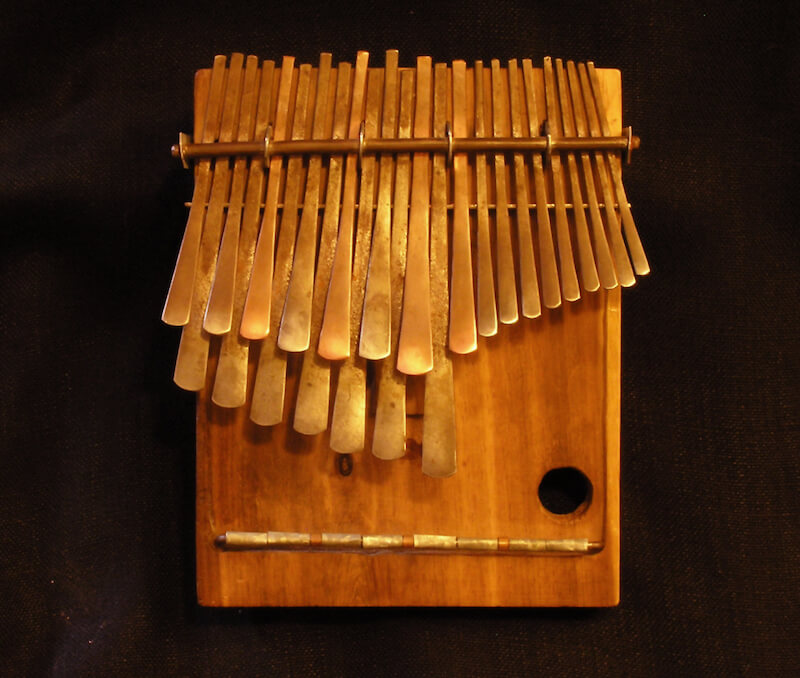 A welcome freshness arrives in the next movement, “mbira song.” The mbira, or “thumb piano,” is an indigenous percussion instrument of Central and Southern Africa. Its music is characterized by numerous rhythmic layers, superimposed and interwoven to create a sort of syncopated “music box.” The third movement tries to capture the charming grooves of this musical texture.

Rhythmic performance anchors the last movement even more prominently. In early jazz, “stop time” is the term for a sparse, punctuated accompaniment, one usually meant to support a tap dance routine. In “sto(m)p time dance,” the trio provides both the song and the dance. The players trade solos, bang out rhythms with their feet, and bounce along briskly in a spirited finale. Stomping Grounds was commissioned by Brian Connelly and CONTEXT, with grant support from the city of Houston through the Houston Arts Alliance.

Incorrectness in your speech
Carefully avoid, my Anna;
Study well the sense of each
Sentence, lest in any manner
It misrepresent the truth;
Veracity’s the charm of youth.
You will not, I know, tell lies,
If you know what you are speaking.
Truth is shy, and from us flies;
Unless diligently seeking
Into every word we pry,
Falsehood will her place supply.
Falsehood is not shy, not she—
Ever ready to take place of
Truth, too oft we Falsehood see,
Or at least some latent trace of
Falsehood, in the incorrect
Words of those who Truth respect.

—Charles Lamb
from Poetry for Children (1809)

The Charm of Anna

Unless we are seeking to pry the truth
From my words of youth,
Carefully avoid the charm of Anna:
She is not shy, not shy in any manner.
If you study well your speech,
And diligently misrepresent into each
Sentence, lest it supply
The what, will, who and know,
Incorrectness will take Veracity’s place—you see?
In her place, we sense, flies some latent trace of oft.
Speaking of Truth:
In truth, every word of those you respect is
Falsehood, Falsehood, Falsehood, Falsehood!
(Or is at least incorrect.)

The Supply of Flies

Take carefully each speech
Pry every sense from my sentence
Speaking, seeking
Of youth, of truth,
Or of lies—
We will ready the supply of flies!
I, you, my, we
Study your veracity’s
You see?
Incorrectness
if, of, oft
the will, the well, the words
We respect, incorrect
Truth, shy, truth
(Place into you-know-who)
Falsehood, shy, falsehood
it us, in lest, at least, in some
not word, what know, those are
Not to avoid charm
Truth is she any?
Unless in latent her manner too diligently is…
Of truth tell not ever
Anna