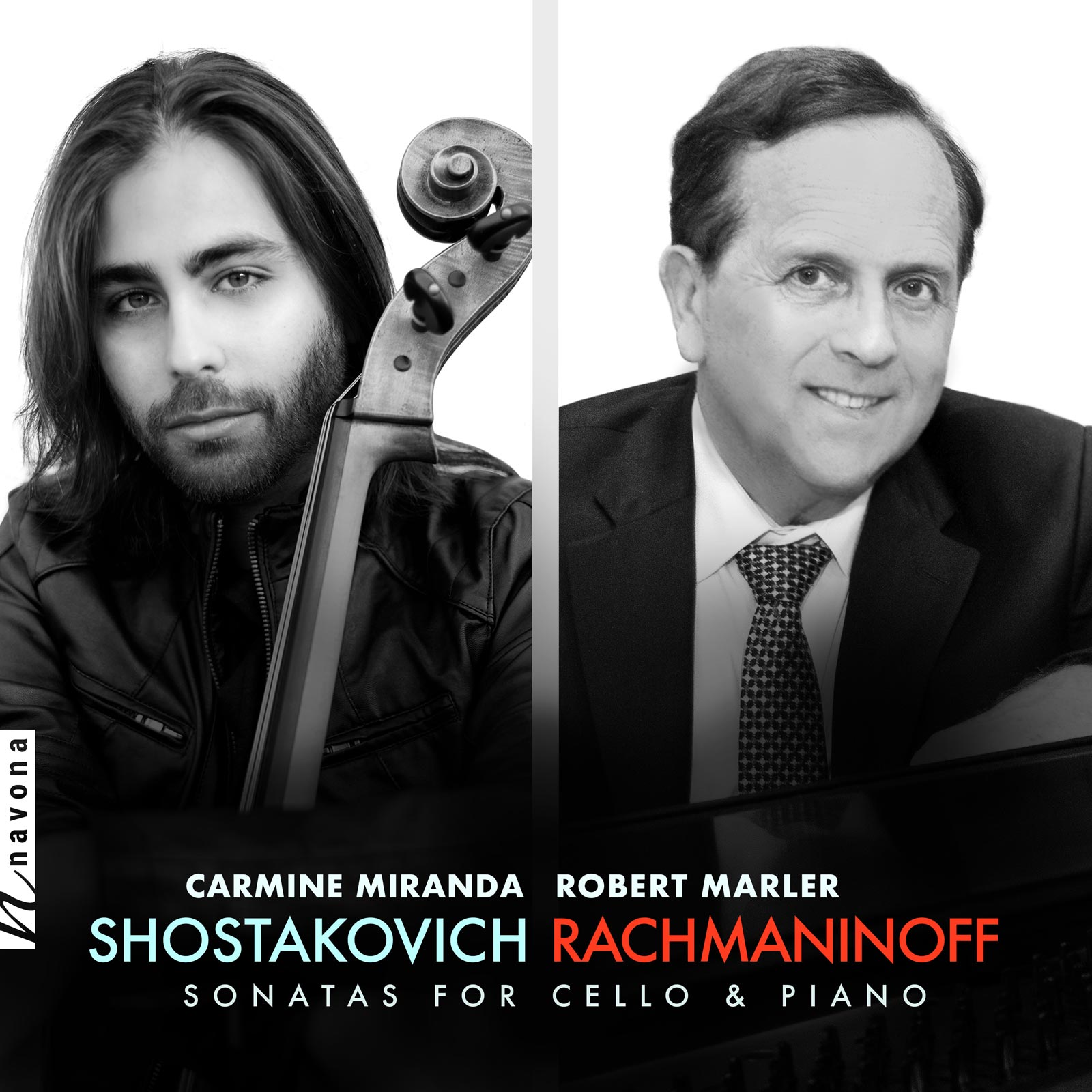 Navona Records presents SHOSTAKOVICH / RACHMANINOFF: SONATAS FOR CELLO AND PIANO, an album that highlights the musical expression and virtuosity of these renowned works.

Deeply expressive with interplay and virtuosic passages, these two sonatas are held to high regard by pianists and cellists alike. Once turning points in the lives of Shostakovich and Rachmaninoff, these works have stood the test of time, rewarded with commanding performances by cellist Carmine Miranda and pianist Robert Marler.

Recorded on a 2005 Jules Azzi cello made in New York City, with a set of Dogal Montagnana Cello Strings handmade in Venice, Italy courtesy of Dogal Strings. 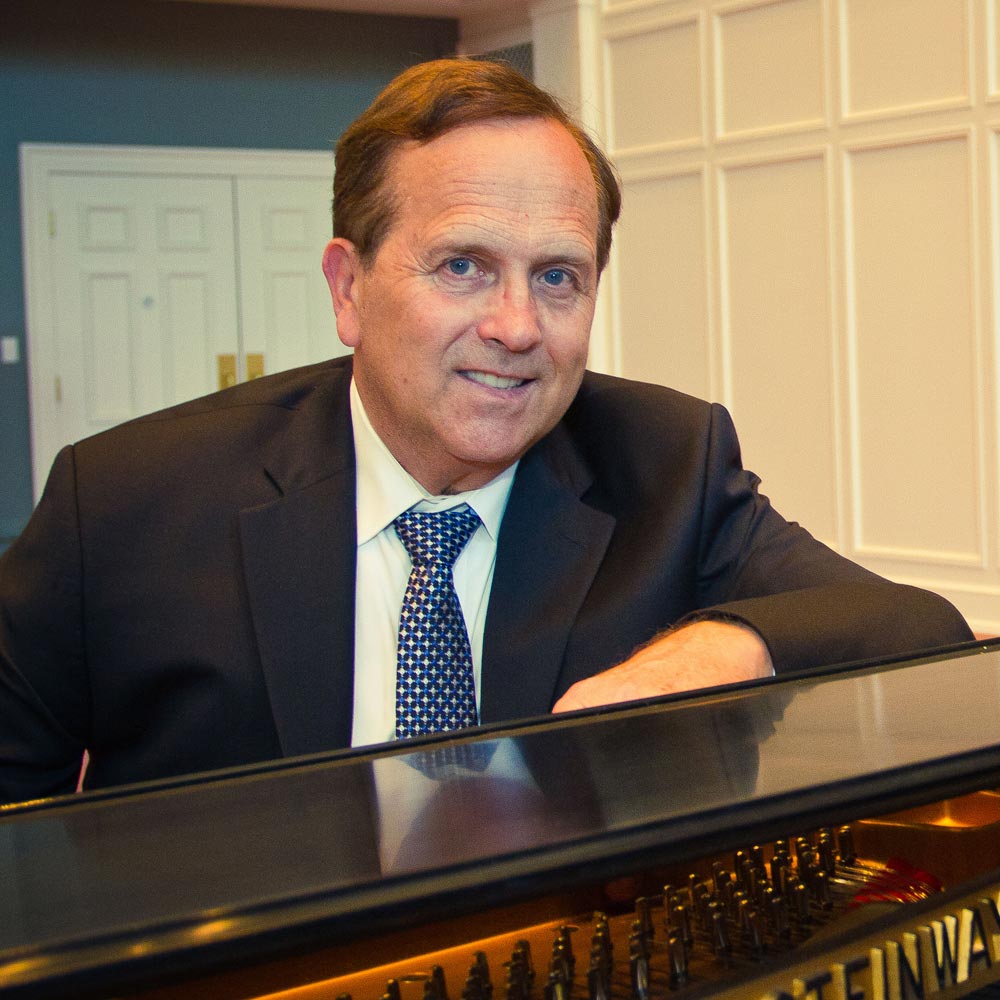 Nashville Symphony pianist Robert Marler has performed on 12 GRAMMY-winning recordings. He has participated on more than 30 recordings with the Nashville Symphony, Buffalo Philharmonic, and Nashville Chamber Orchestra. He has performed with Itzhak Perlman, Anne Akiko Meyers, and many other major classical and pops artists such as Branford Marsalis, Elvis Costello, and Brian Wilson. Marler has also performed under the baton of many renowned conductors such as Lenard Slatkin, Sir Neville Marriner, Krzysztof Penderecki, Lawrence Foster, and many others.

In 1934 the Soviet Leader Joseph Stalin launched a blood-stained campaign to eliminate several perceived enemies of his state. Amid the long list of political figures and military personnel, were also writers, filmmakers, actors, musicians, and composers who were arrested on fabricated charges. Most were subject to exile, interrogation, torture, humiliation, starvation, and execution.

During the same year and shortly after composing his opera Lady Macbeth of Mtsensk, Shostakovich wrote the Cello Sonata in D minor as a personal request from Viktor Kubatsky, who was the principal cellist of the Bolshoi Theater in Moscow. The sonata was a way for Shostakovich to counter a tendency from his Soviet contemporaries to neglect chamber music compositions in favor of orchestral works. At the same time, the Cello Sonata offered a significant stylistic departure from his opera as a more lyrical, classical, and resonant work.

The first movement “Allegro ma non-troppo” displays the composer’s melodic prowess with a lilting, melancholic theme that gets repeated and varied throughout the movement. The second movement “Allegro” includes one of the first instances of Shostakovich’s musical sarcasm displayed by variations on an ostinato theme for both instruments. The slow and expressive third movement “Largo” is evocative of pain by using purposeful dissonances that rarely resolve in consonances. Additionally, the piece concludes with a rapid fourth movement “Allegro” which culminates into a chaotic and frantic ending bursting with virtuosic passages for the cello and piano alike.

Although the composer is also known for his intentional and descriptive markings in the score of this work, the Cello Sonata however was often reworked and performed at the piano by Shostakovich until his death. Shostakovich also performed many contrasting and stylistically different interpretations of this work with his personal friends and cellists: Viktor Kubatsky, Daniil Shafran, and Mstislav Rostropovich.

Two years after writing the piece, the Bolshoi Theater hosted his opera performance which was personally attended by Stalin. After this performance, an anonymous review of his opera was published by the Soviet newspaper Pravda with the title “Muddle Instead of Music.” Some historians speculate that Stalin was the writer of this article which attacked Shostakovich’s music but also included a stern warning to the composer: “It is a game of clever ingenuity that may end very badly.”

In 1936 Shostakovich became a heartbroken man, terrified of the Soviet state. His compositional output was under threat due to the censorship of Soviet authorities that left him artistically shackled. This time would also become very important for Shostakovich as it would commence a long period of danger, immense paranoia, and distrust of the Soviet government for the rest of his life.

At the turn of the 20th century, Rachmaninoff went through a severe confidence crisis due to the disastrous premiere of his Symphony No.1 in 1897, which was the subject of heavy criticism. Rachmaninoff underwent a writing block hiatus for three years after his symphony’s premiere which prevented him from writing almost anything due to severe depression. It is said that the composer went through several daily hypnotherapy sessions which eventually helped him to overcome this block, thus giving birth to his Sonata for Piano and Cello in G minor.

A long-running joke between pianists and cellists is that Rachmaninoff was very precise about the title of his sonata: “Sonata for Piano and Cello;” not the other way around. All jokes aside, the sonata was written before his acclaimed Second Piano Concerto, and some pianists may equally regard this work as being technically demanding as his concerto. Likewise, Rachmaninoff intended for the piano to carry an equal role to the cello instead of accompaniment.

The sonata was dedicated to his family friend Anatoliy Brandukov, the great Russian cellist and educator that also premiered many pieces by Pyotr Tchaikovsky. Although 14 years apart, Brandukov had a long-lasting friendship with Rachmaninoff, becoming the best man at the composer’s wedding and performing many pieces together. Moreover, Rachmaninoff and Brandukov premiered the sonata together in Moscow, one month after the premiere of the Second Piano Concerto.

Written in four movements, the sonata is stylistically Romantic in quality as it explores the musical expressivity and intensity of both instruments with the use of a two-note main theme. The first movement “Lento – Allegro Moderato” introduces the main theme with the cello, which the composer expands throughout the entirety of the movement and composition. The second movement “Allegro Scherzando” explores the rhythmic and rhapsodic duality of the main theme while the third movement “Andante” is the most passionate of the piece; arguably regarded as one of the most beautiful movements in the entire cello and piano repertoire. The piece concludes with a triumphant fourth movement, “Allegro Mosso,” as the composer reminds the listener of the two-note motive towards the end of the movement; this time in the key of G Major.

18 years after composing the Cello Sonata, the Russian Revolution — which began during the first World War — forced Rachmaninoff and his family to leave his Russian hometown and settle in New York City. Eventually, Rachmaninoff would relocate one more time to Beverly Hills CA where he spent the last year of his life.