The Inside Story: Robert Fleisher and MOTO FINALE 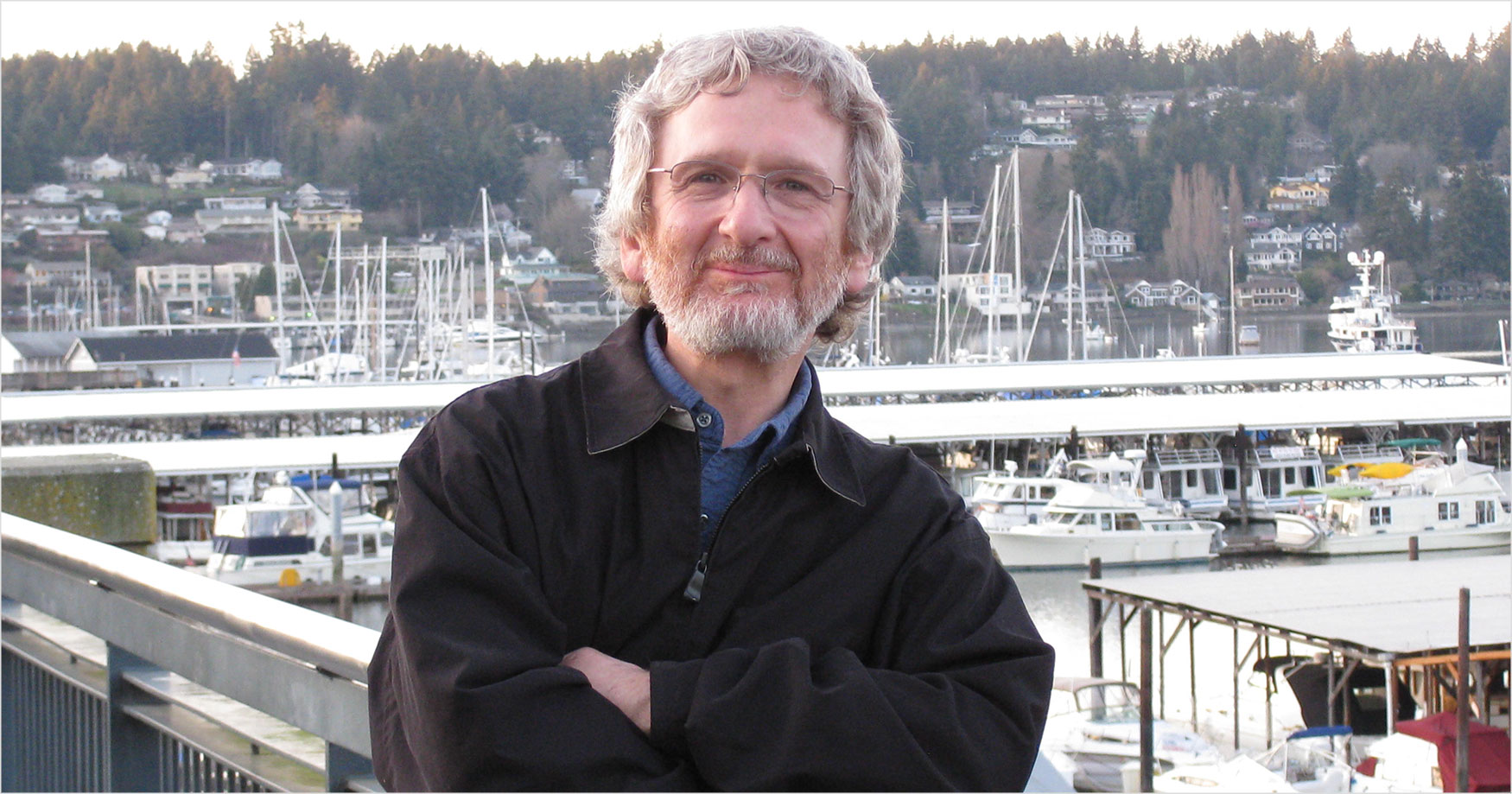 MOTO FINALE brings the beloved chamber music series to a close with a number of works inspired by nature, loss, spiritual connection, and music of the past. The seasoned Trio Casals returns for this seventh and final installment to perform the works of seven composers including Robert Fleisher, whose Dumkyana compresses Dvořák’s six movements of Dumky into one, expanding his melodic and harmonic language.

Today, Robert is featured artist in “The Inside Story,” a blog series exploring the inner workings and personalities of our composers and performers. Read on to learn about his unorthodox performance in total darkness, and where he found the inspiration for Dumkyana…

There were many, with The Beatles dominating my airwaves through most of the 1960s, but Freak Out (1966) and Absolutely Free (1967) signaled the arrival of a unique voice in Frank Zappa, who generously welcomed an ardent teenage fan to observe him rehearse, record, and perform with the Mothers of Invention. I first met Frank at Apostolic Studios, where the Mothers were recording their third album, We’re Only in it For the Money (1968). I next saw him, by chance, purchasing musical gear at Manny’s. I helped load up a cab and returned with him to his West Village apartment, where we played tunes from Freak Out on guitar and keyboard. Frank graciously invited me to return in the future, and soon I was on the list of those receiving passes to all four weekend Fillmore East shows when the Mothers were performing. After they returned to California, I was the Zappas’ guest in Laurel Canyon, and the following year at their new home in the Hollywood Hills. I still consider the many hours spent observing Frank in the studio, and later hearing him edit those same tapes at home overnight, an important and influential part of my musical education.

I grew up in a very musical family. My mother first saw — and heard — my father on the bandstand — playing reeds — in the Catskills. She also sang beautifully and played piano by ear. My brother has a terrific ear, which undoubtedly served him well — in his first of 3 careers — as a high school choral conductor in upstate New York. We both have absolute pitch and play multiple instruments. In grade school, I occasionally substituted for the teacher who normally played piano for our “assemblies,” and I alone accompanied the 6th grade production of Oklahoma. At the 92nd st Y, I studied piano, music theory, and sang in choir. As a teenager, many enjoyable hours were spent with a number of creatively compatible musician friends — improvising, rehearsing, and recording scores I had written. I also created several experimental “tape pieces” (c. 1970), which have in more recent years received dozens of performances in the United States and abroad. Perhaps my first real decision to be an artist-educator was enrolling as a music theory and composition major at the University of Colorado (Boulder), following which I earned both M.M. and D.M.A. degrees in Composition at the University of Illinois, with a secondary emphasis in Ethnomusicology.

My most unusual performance, while still an undergraduate at the University of Colorado in 1974, was of a 16 minute work for 10 mobile musicians and four tape sources — including two mobile battery-operated cassette players, shared by multiple performers — all in near-complete darkness, including exit lights. The title Seraffyn — and its inspiration — was the professional name of a dear family friend, Donald Mork, a modern-day “wandering minstrel” who played the lute and sang in multiple languages at colleges, castles, and in family homes internationally. His untimely death at 36, resulting from a fatal car accident, shortly followed the release of his Columbia LP, Of Love, Of War, Of Many Things – The Last Great Troubadour in 1964. To prepare the musicians to perform from memory while moving through the dark hall, my “wandering minstrels” reduced the essential information from their parts to index cards. Nylon cord was taped all along the aisles to the stage steps, to guide the shoeless musicians through the space, and we spent months rehearsing with the essential assistance of an experienced movement coach. The concert was a collaborative effort by several undergraduate composers who performed as an improvisation ensemble, and whose individual works were also represented.

Until my retirement several years ago, I was privileged to do just that for more than three decades, as a professor and longtime coordinator of music theory and composition at Northern Illinois University. NIU generously supported my compositional and scholarly endeavors, including participation at national and international conferences and festivals, and ethnomusicological research in contemporary Israeli music, culminating in my book, Twenty Israeli Composers (1997). Throughout and beyond my tenure at NIU, the Illinois Arts Council also supported my compositional efforts. I had wonderful faculty colleagues at NIU, many of whom I also had the good fortune and great pleasure to collaborate with as a composer. I also greatly enjoyed and learned much from teaching the widest variety of students from first-year undergraduates to graduate students. I’m still in touch with many former students and faculty colleagues, and continue to collaborate with some from time to time. A forthcoming CD of flute and percussion music — including three NIU performance alums — will also include the first recording of a steelpan and marimba duo by Professor and Coordinator of Music Theory and Composition, David Maki, who I first knew when he was an undergraduate composition major there in the early 1980s.

I’ve been very fortunate here too, having long ago been awarded resident fellowships at several artist colonies around the United States (Hambidge, Millay, Montalvo, VCCA, Yaddo). These were extraordinary opportunities for reflection, experimentation, focused work, idle walks, and stimulating interactions with other artists in a variety of disciplines. Internationally, while interviewing composers of three generations in Israel in 1986, I was most fortunate to be in residence at Mishkenot Sha’ananim, a center for visiting artists and scholars where I also worked on a 10-movement (30-minute) duo for soprano saxophone and trumpet, titled Meditations, which was performed in a variety of venues in the years following. I’m currently exploring the possibility of releasing a CD of the New Music from Israel concert I produced at NIU in 1987, with the participation of several Israeli composers and performers together with NIU students and faculty. This extended COVID season, which canceled one national and another international new music festival in which I was to participate, reminds us of the benefits of spending “creative time” closer to — or at — home, where I most recently completed a toy piano miniature dedicated to my longtime NIU composition faculty colleague and dear friend, Jan Bach (1937-2020).

After participating in MOTO CONTINUO (2015), which included my Ma mère (2004) for solo cello (a “fantasy-reconstruction” of the second-movement cello parts from Debussy’s La mer), and receiving a fine MOTO VIRTUO (2020) performance by Ovidiu Marinescu of my Memoranda (2005), MOTO FINALE is our third collaboration since meeting at the 2014 PARMA Festival, and my first with Trio Casals, whose premiere recording of Dumkyana is in good company among the diverse repertoire on the album. I composed this work for the Amicizia Trio (Song-A Cho, violin; Stephanie Iovine, cello; Johanna Kosak, piano), whose 2012 CD Prologue introduced me to Dvořák’s remarkable Trio No. 4 (“Dumky”). Dvořák’s six movements are each in their own key, exemplifying the Romantic era’s characteristic “progressive tonality.” All, however, share the common thread associated with the Slavic ballad genre of the dumka (lit. “thought” or “memory”), typified by marked contrasts of slower and faster passages which also inspired works by Borodin, Chopin, Liszt, and Tchaikovsky. Premiered (as Variations & Soliloquies) by the Amicizia Trio during a 2014 Midwest tour, Dumkyana compresses Dvořák’s six movements into one, which expands his melodic and harmonic language (including bits of Beethoven, Berg, Debussy, and Rimsky-Korsakov here and there).

MOTO FINALE is available now from Navona Records. Click here to visit the catalog page and explore this album.