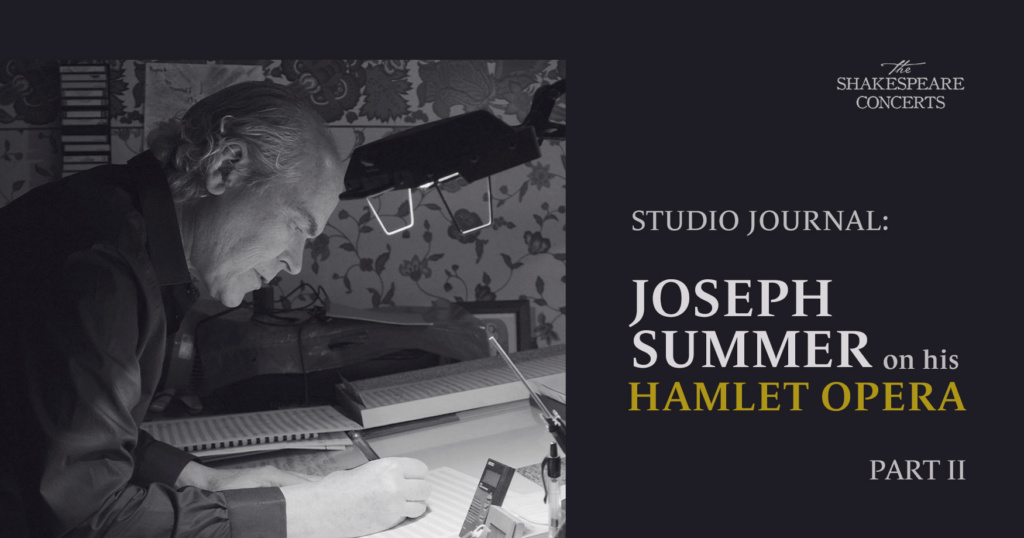 “Heretofore I’ve never been to Bulgaria; but that’s not to say I’m unfamiliar with the country, its people and customs, its history, and its music,” said composer Joseph Summer in his first guest blog with PARMA.

Today, Summer returns to the PARMA blog with a second installment of his Studio Journal, a series of anecdotes and stories surrounding his operatic adaptation of Hamlet. While producing a full-fledged opera in a few months time makes for quite the tale, so do the stories of coincidence and curiosity behind the curtain. Read on for a thrilling continuation of Summer’s ties to Bulgaria and its people…

It appeared to be a perfect replica of 1970s middle America, reminiscent of my home town of Pittsburgh. Citizens strolled about, free of masks. Masks? They were absent, except inside one supermarket, where they were worn as chin protectors. Boys and girls glided by on scooters while their parents and grandparents sat heedless, happily smoking cigarettes in the sunny square. Where was I? No, I knew where I was, but: WHEN was I?

In the late morning, my wife and I would walk a few hundred yards to the fire ravaged Ruse Opera House, befuddled by the shift from the disease-focused United States to the obliviously serene Bulgaria. Hamlet was just beginning, with vocal rehearsals and then staging rehearsals. There was some controversy when we discovered that our Rosencrantz was also working on Lucia di Lammermoor, the first Ruse Opera production in a long while, as the company had been first beset by a conflagration in their house and then – as were we all – by the COVID-19 lockdown. But now, in mid May, here in Ruse, it was as if the pandemic had never happened, nor that time had passed since the early 1970s. Aside from our complaints about the double booking of Rosencrantz, our rehearsals in the charred smoky hall were going swimmingly, and it was immensely gratifying to perambulate twice a day, and be greeted by a giant Hamlet banner, adjacent to one for Lucia. 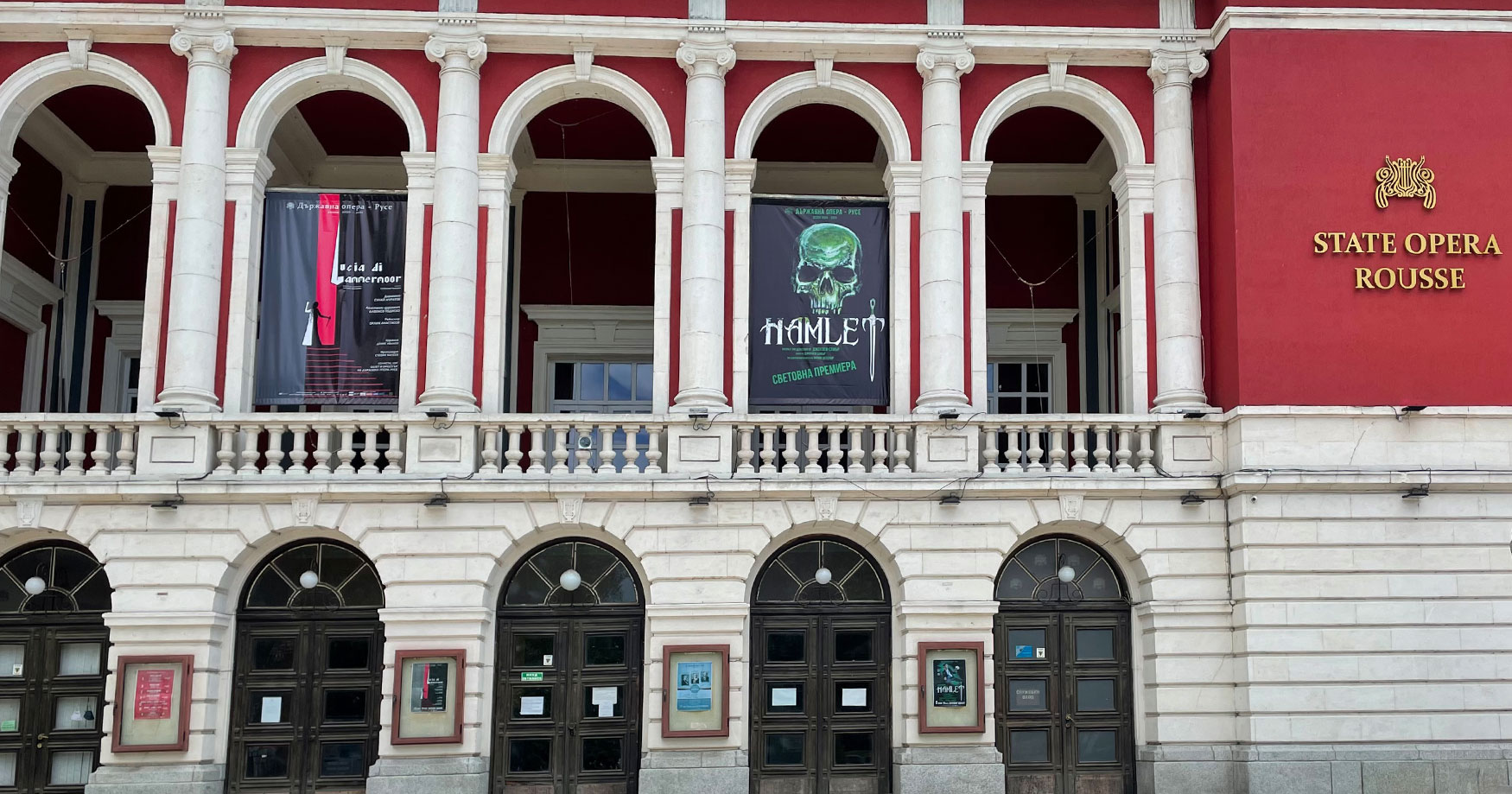 Donizetti’s magnum opus was being presented at the Dohodno Zdanie, the great hall across the square from the recently razed Ruse Opera House. Our imported singers and conductors were all invited by Ruse Opera’s director, Ivan Kyurkchiev, to attend Lucia, and did so enthusiastically. Ivan invited Lisa and me to a post-Lucia meal at a restaurant adjacent to Dohodno Zdanie (named, aptly, “Good Food Restaurant”) where we were joined by Ivan’s wife, and a Bulgarian member of parliament and his wife. I’d not really gotten to know Ruse Opera’s director Ivan before the Lucia performance. We’d crossed paths, but only briefly. When he invited Lisa and I to dine with him, I was afraid it might be uncomfortable for all of us. I sat down at the outdoor table with trepidation.

I’m going to invite Ivan’s lovely wife, Elitsa, to put in her two cents about this meal, but first, I need to refer you, gentle reader, to the previous blog published by PARMA — Studio Journal: Joseph Summer on his Hamlet Opera Part 1 — in which I described my strange interlude in Boston, in the summer of 1973, with a young Bulgarian student, named Elitsa (ostensibly the daughter of a major figure in the notorious Bulgarian espionage agency), and a Bulgarian field operative in a grey suit, with a bag of silver. I’ll wait for you here, in this sentence, as you read — or reread — the previous narrative.

Every time the tenor sings “O bell’alma innamorata,” at the end of Lucia, I break down; it never fails. “O bell’alma innamorta.” Tears. After the final curtain, wiping tears from my eyes, Lisa and I departed the hall to meet Ivan and company for dinner and drinks. I felt awkward, about to share time with the opera director and his friends, and unsure whether the language barrier would be a burden: whether we could find common ground for confabulation. 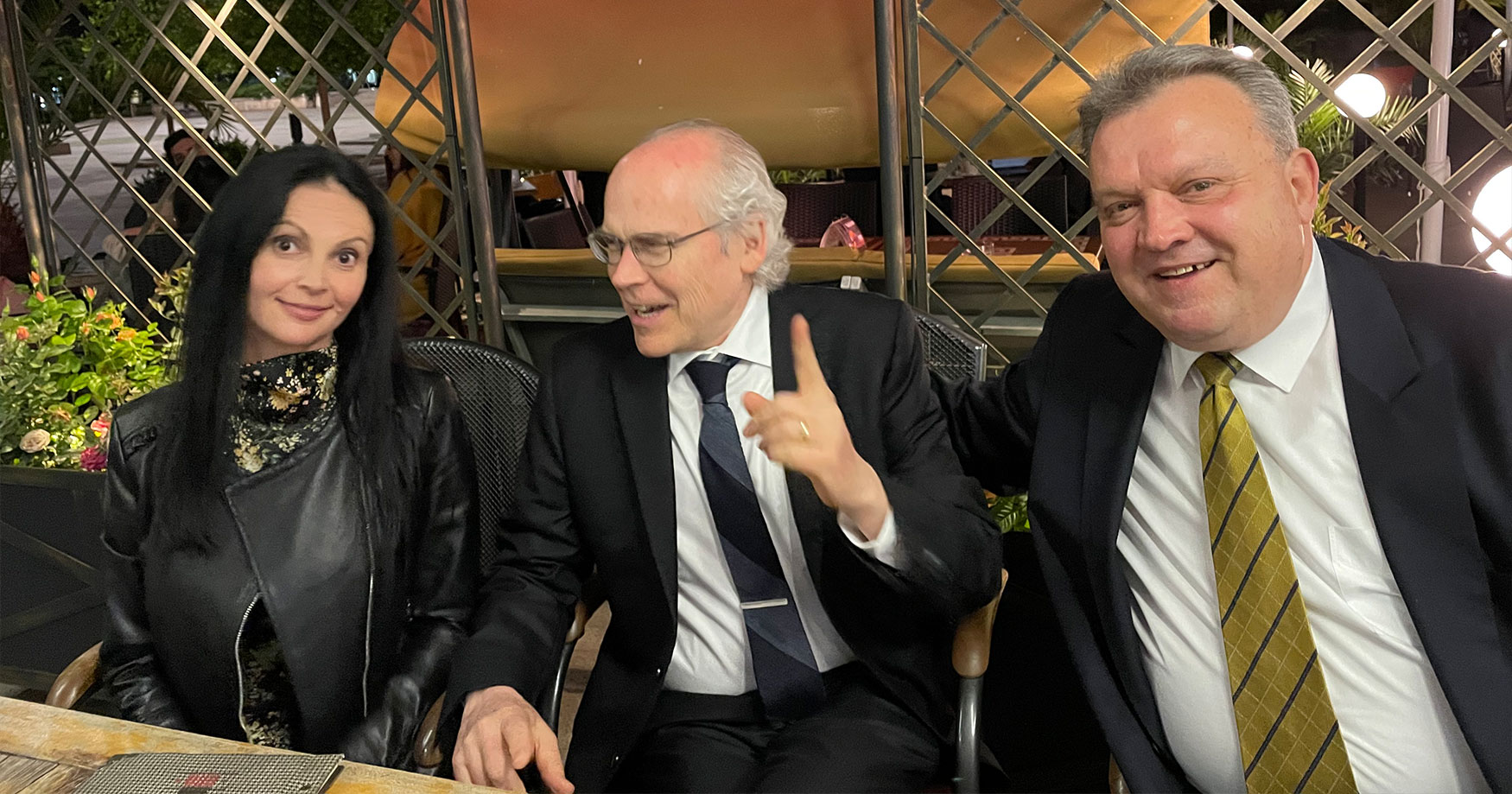 As I often do when feeling ill at ease in a social situation, I launched into a lengthy story from my past to avoid the discomfort of the initial conversational struggle. Half the table — Elitsa, the parliamentarian, and spouse — chatted in Bulgarian. In our half, I buttonholed Ivan and began the tale of Elitsa Bachvarova, my unintended intended. As you’ve read the prior blog, you’ll realize that I did not give Elitsa’s full name therein, but now must, as it is essential to do so now to make sense of the ensuing story. 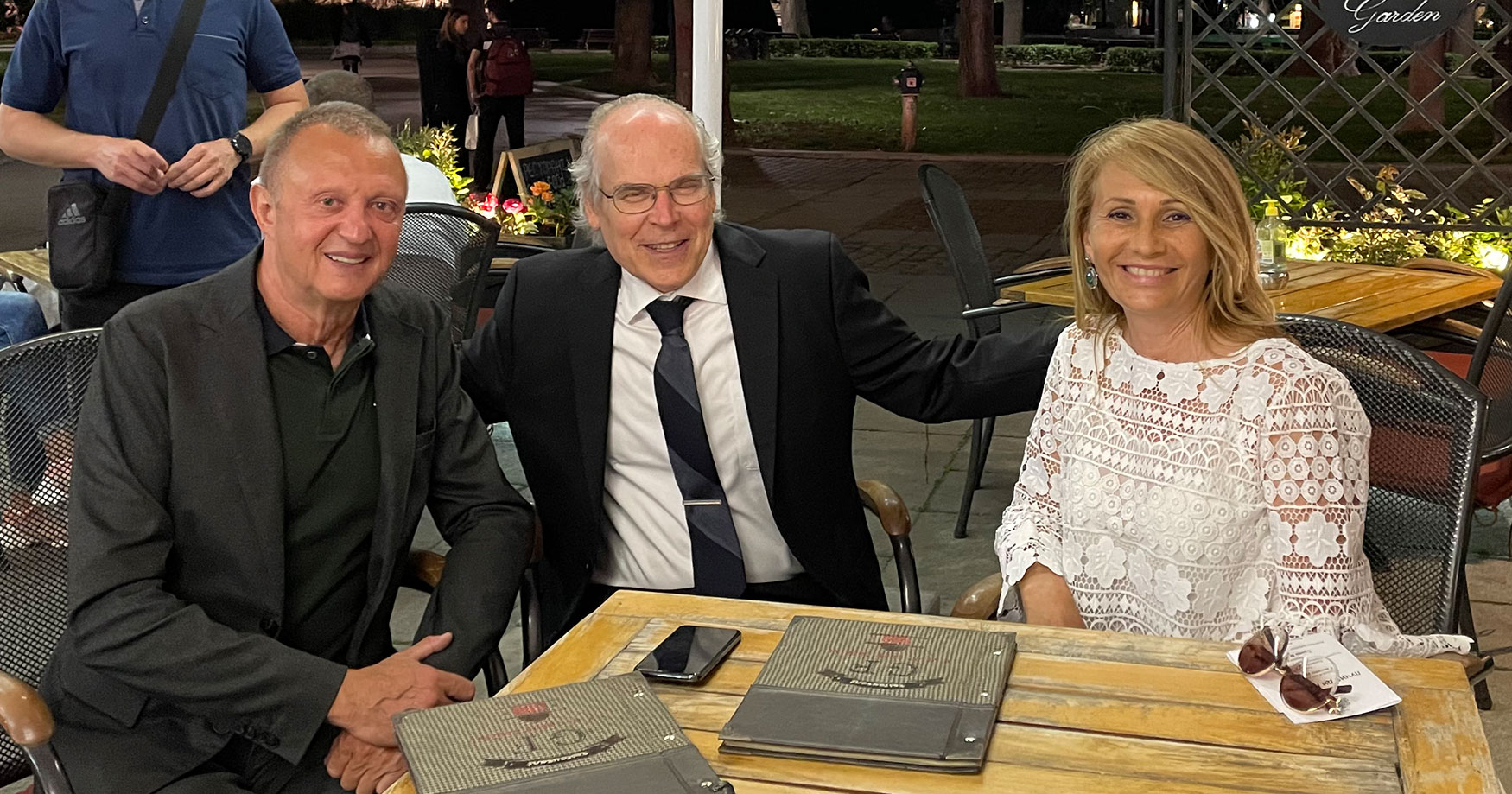 Joe Summer sitting between the Bulgarian member of parliament and his spouse.

Though Ivan might have introduced me to his wife with her name during a brief meeting during intermission, I’d not marked it. Now, as I led Ivan through my misadventures with the 1973 Elitsa, I was not bashful when pronouncing her name aloud, “Elitsa Bachvarova.”

We interrupt our narrative to hear directly from the 2021 Elitsa, in a story she titles: “On my way to Liberty.”

“Wake up calls at 6.30 a.m. are not my favorite. This morning it came with a Facebook notification of a warm memory from 17 years ago: a picture of me on the ferry to the Statue of Liberty. I shared the picture in our family chat with a short comment, ‘… still on my way to liberty…’ The short-lived hint of nostalgia was followed by a long working day after which I completely forgot about the start of the day. A visit to an opera premiere in the late evening was my very last plan for the day. I did not anticipate anything unexpected, as this title I had seen many times. The evening however presented me with much more than my preliminary schedule. Meeting the American composer Joseph Summer and his lovely wife Lisa during the intermission was an unexpected and truly nice surprise. Sharing their first impressions about the city and its people along with Joe’s knowledge about Bulgarian folk music and traditions was amusing. Intermission was however too short to share more and we decided to have dinner after the performance.

We were sitting in a colorful company around a big table in the nearby restaurant together with Joe and Lisa, a parliament member and his wife, artists, and friends. There were lively discussions on various subjects among all of us. While I was talking to the lady on my right, I heard Joe saying my first and family names with quite precise Bulgarian pronunciation while talking to my husband. I did not follow their conversation, but I referred to Joe saying I am glad to be part of their talk. Joe looked somehow surprised. Then my husband explained that my name was Elitsa Bachvarova, though few people knew me by last name since I am better known with my second name, Elitsa Pavlova. Joe suggested that maybe these are typical and pretty common Bulgarian names. I added that both names are Bulgarian though the combination is definitely rare. Joe then looked almost shocked. He asked me insistently if I had any relatives in America. I did not remember having any relatives there, nor had I heard of anyone with the same name as mine. Joe then raised his hand and asked everyone to shut up and to listen to the story he was about to tell. All of us fell silent; he asked me to translate. While translating, I learned about his own story with Elitsa Bachvarova that happened in Boston half a century ago. And then the surprise was even bigger for me. The politician immediately suspected the involvement of secret services in Joe’s story and looked at me curiously. I had to explain once more that I do not know anything about relatives of mine in Bulgaria though I thought deeply, as if it is something one may forget.

The evening was over and it did not take me long to fall asleep, though the thought about my namesake continued to bewilder me. It took my brain about 4 hours to relax and wake up with the answer to the riddle. Of course, I couldn’t remember the woman with the rare combination of my own names, the daughter of one of the most remarkable Bulgarian writers of our time, whose name in translation means Liberty.”

Svoboda Bachvarova, I later discovered, with present Elitsa’s research, was one of Bulgaria’s most renowned 20th century writers, and she lived no more than ten minutes from where we were dining. So, past Elitsa was born here, in Ruse. I was always destined to sit in this square sharing a meal with an Elitsa Bachvarova. Some Elitsa Bachvarova.

A synopsis: in 1973, I met a young Bulgarian woman, Elitsa Bachvarova. She claims her mother is a spymaster to explain why I was accosted on Mass Ave near Harvard Yard by a Bulgarian who — not carrying a poison tipped umbrella, but carrying a bag of American silver dollars — presents me with a considerable treasure and insists I give it to my “girlfriend.” Though Elitsa is not my girlfriend, I learn that my actual girlfriend, “Elle,” intends for me to marry Elitsa, ostensibly to help her emigrate to the United States. About fifty years later, I am recounting this story in Ruse, Bulgaria. When I loudly say “Elitsa Bachvarova,” I attract the attention of Ruse Opera’s director’s wife, Elitsa Bachvarova, who wonders why and how I know her actual name, which she doesn’t use. I don’t know her name, and yet I do.

To end the evening’s tales of two Elitsa Bachvarovas perfectly, the parliamentarian spoke up, declaring that he was quite aware of the smuggled silver, and that it was the reason he had joined us for dinner. “You didn’t follow your instructions,” he declared in mock anger. “Elitsa said she never received the money.”

Present Elitsa did some online research following our dinner, and discovered that Past Elitsa became a professor at a university in Rio de Janeiro, and that eventually she brought her mother Svoboda to Brazil, to live with her. When I remarked that it seemed evident that Past Elitsa’s tale that her mother was a top spy in the Bulgarian Secret Police was untrue, Present Elitsa said that just because she was a famous writer didn’t mean she wasn’t a spymaster. Of course, that could be the case. After all, who would believe that Jackson Pollock, Willem de Kooning, Franz Kline, and Mark Rothko – basically the entire school of American Abstract Impressionism – were funded by the CIA as a propaganda tool against Soviet Hyper-Realism? Yet, that is the case. And what do I really know about how my Hamlet project was funded?