THE INSIDE STORY: The Pedroia Quartet and QUADRANTS VOL. 2 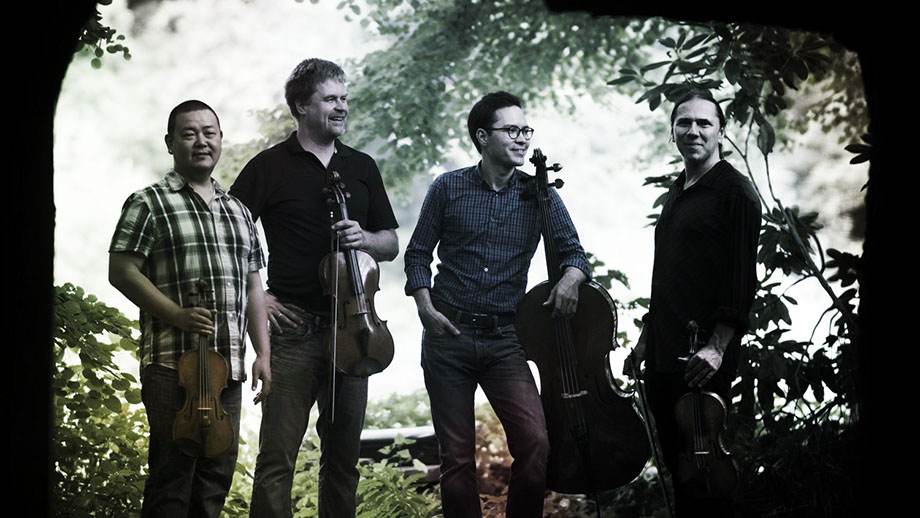 With an intense and beautiful blend of freshness and experience, the Pedroia String Quartet is bursting onto the Boston scene. To the unified and persuasive core of Peter Sulski and Rohan Gregory’s ten years of quartet playing together, add the power and fire of first violinist Jae Cosmos Lee and the consummate beauty and flexibility of cellist Jacques Lee Wood, and you have the Pedroia Quartet.
Peter’s seven years in the London Symphony,Jae’s founding of the most exciting new chamber orchestra in the United States, “A Far Cry,” Jacques’s solo appearances with orchestras in Seoul and Merkin Hall, Rohan’s tours through India, Thailand, and Brazil with famous world music groups – these comprise the ingredients that make up the complex and versatile playing of the Pedroia.
Having steeped themselves in the knowledge of the Juilliard, Cleveland, Tokyo, Vermeer, and Takacs Quartets, the Pedroia members have gone on to play as guests with the Borromeo, Jupiter, Audubon, and Alcan quartets, and members have founded, toured, and recorded with both the Arden and QX quartets. Peter and Rohan, founders and 10-year members of QX, held a Clark University residency, recorded on Albany Records, and performed in Jordan and Mechanics Halls; to this core of experience add the dynamism of Jacques and Jae, and Boston’s newest sound is heard: The Pedroia.
Today, the Quartet is our featured artist in “The Inside Story,” a blog series exploring the inner workings and personalities of our artists. We caught up with violinist Rohan Gregory and violist Peter Sulski to learn more about their artistic lives growing up and their everyday experiences behind the scenes. Read on to learn about why Peter decided to follow the musician lifestyle, or what happened when Rohan misread the start time for a performance of Benjamin Britten’s War Requiem…

Peter: There were so many for me – from violinist Pinchas Zukerman, to violist Atar Arad, who did crazy things on the viola, to pianist Gilbert Kalish, who coached me at Tanglewood.
Rohan: My initial favorite artists were due to my older brother’s influence (he’s now a rock guitarist and singer who tours with Brian Wilson). When I was 5, he was listening to, and I deeply absorbed, the Beatles, while my parents were listening endlessly to Bob Dylan when I was 4. My youth was saturated with the great rock icons like the Stones, the Who, Pink Floyd, the Allman Brothers, and some lesser known deities of rock like my brother’s and sister’s favorites, Todd Rundgren and Steely Dan, along with all the great singer songwriters like Joni Mitchell, Carol King, Neil Young, Crosby, Stills, and Nash, James Taylor, etc… Then came fusion: Pat Metheny and Weather Report which led to Miles Davis and John Coltrane. Eventually I added in Jascha Heifetz, David Oistrakh, and the Guarnieri String Quartet, but it had all started with the Beatles!

Peter: I decided I wanted the musician’s life when I failed my first mathematics exam at the University of Rochester. But seriously (though that did happen), what attracted me most were the incredible people I got to mix with, and the incredible parts of the world that music could take me to.
Rohan: It’s hard to say when I wanted to become an artist. I was following my older brother’s lead and we were listening to and playing music incessantly since as far back as I can remember. Throughout my grade school years I was practicing my violin, learning to play rock songs on the piano, singing along with my brother’s guitar, and learning the oboe. By high school I was leading the tenor section in choir and singing the leads in the musicals, playing my violin in the local orchestra and in chamber groups, learning jazz piano for fun at home, playing lead alto sax in the jazz band, and jamming on the guitar with my best friend every lunch hour, meanwhile listening to music at all other times. I was a musician – it was just a done deal. I didn’t decide to become an artist. I just lived and breathed music.

Peter: Last summer in mid performance, my bow got stuck in my strings as I attempted a violent tremolo.
Rohan: The most embarrassing moment I had was when I mistook the start time of a concert with the Oberlin Conservatory Orchestra for 8:00 when it was actually 7:30. I arrived at what I thought was a half hour early to warm up, and the conductor and soloists were all standing backstage about to launch out for a performance of Benjamin Britten’s War Requiem which of course has two entire orchestras onstage. My conductor told me to get out my violin and take my seat. The orchestra had already tuned and the audience was waiting expectantly for the conductor and soloists to enter. Instead, I appeared, and had to thread my way slowly through the orchestra with the audience applauding my mistake all the while. Yow!

Rohan: My guilty pleasure is eating the apple tartine dessert at Aquitaine, my favorite French restaurant in Boston. It is by far the best dessert in the city. It’s an apple tart drenched with just the right amount of caramel (NO SEA SALT!) and brandy, and covered with just the right amount of whipped cream; a binge of sensuality. I hold myself back from consuming five of these guilty pleasures at one sitting, but just barely!

If you could have instant expertise on any instrument, what would it be?

Peter: If I could have instant talent on another instrument, it would be drums.
Rohan: The instruments I would learn had I unlimited time would by the Uilleann pipes which are Irish elbow bagpipes whose sound I adore, followed by the old time claw hammer banjo, which is such an evocative folk sound for me. Then probably the Turkish oud, where the combination of the microtonal scales and the sonority blend perfectly. So little time!!!

Rohan: Favorite moments are inherently unfair, but if I must, my two favorite moments on the album may be the climactic parts of Hymnody, and the Bartok Third Quartet quotations in This Fragmented Old Man.

Peter: I would love audiences to feel that anything is possible in terms of depth and expression, with whomever the composer and whatever the work. 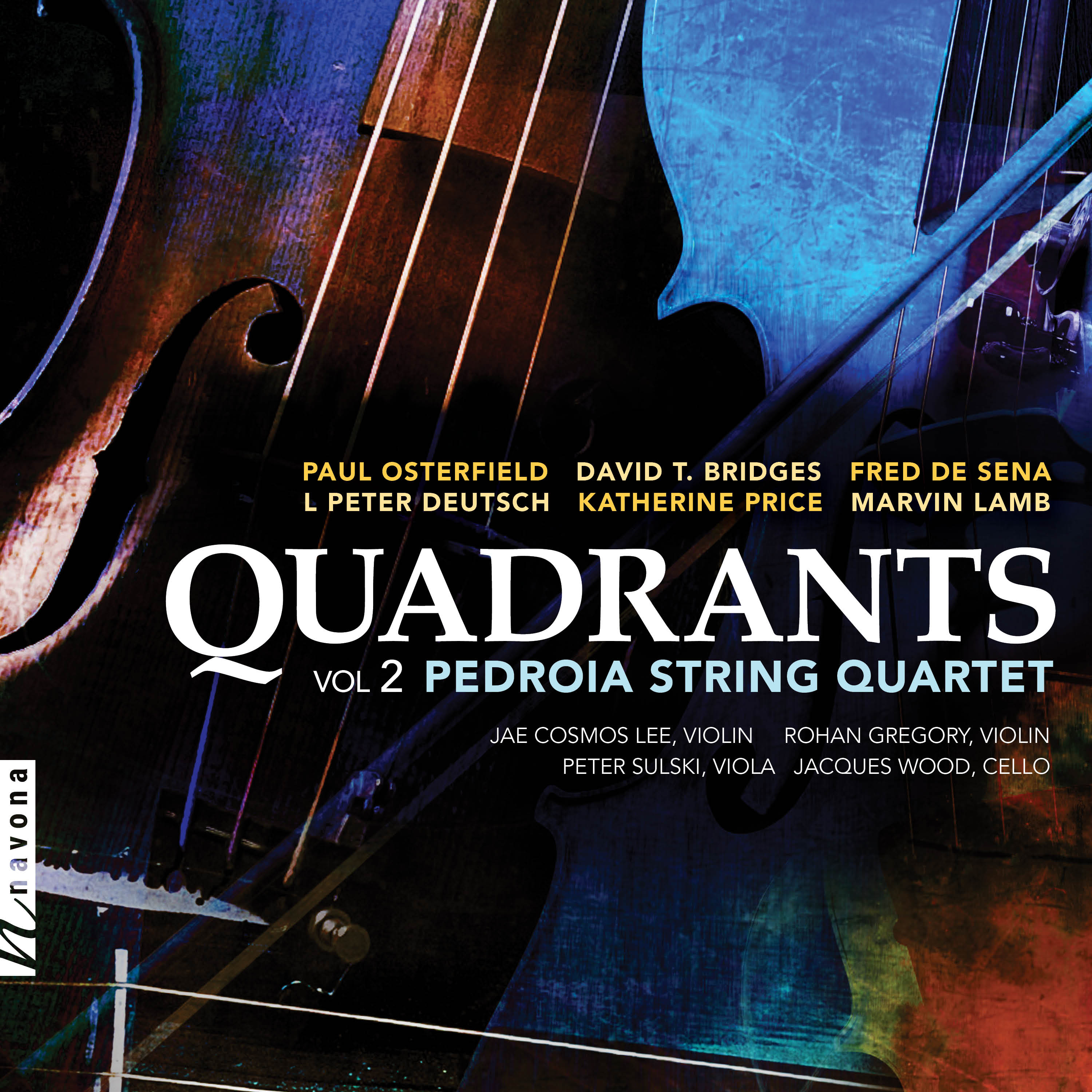 QUADRANTS VOL. 2 is now available through Navona Records for streaming or purchase. Click here to explore this new album.