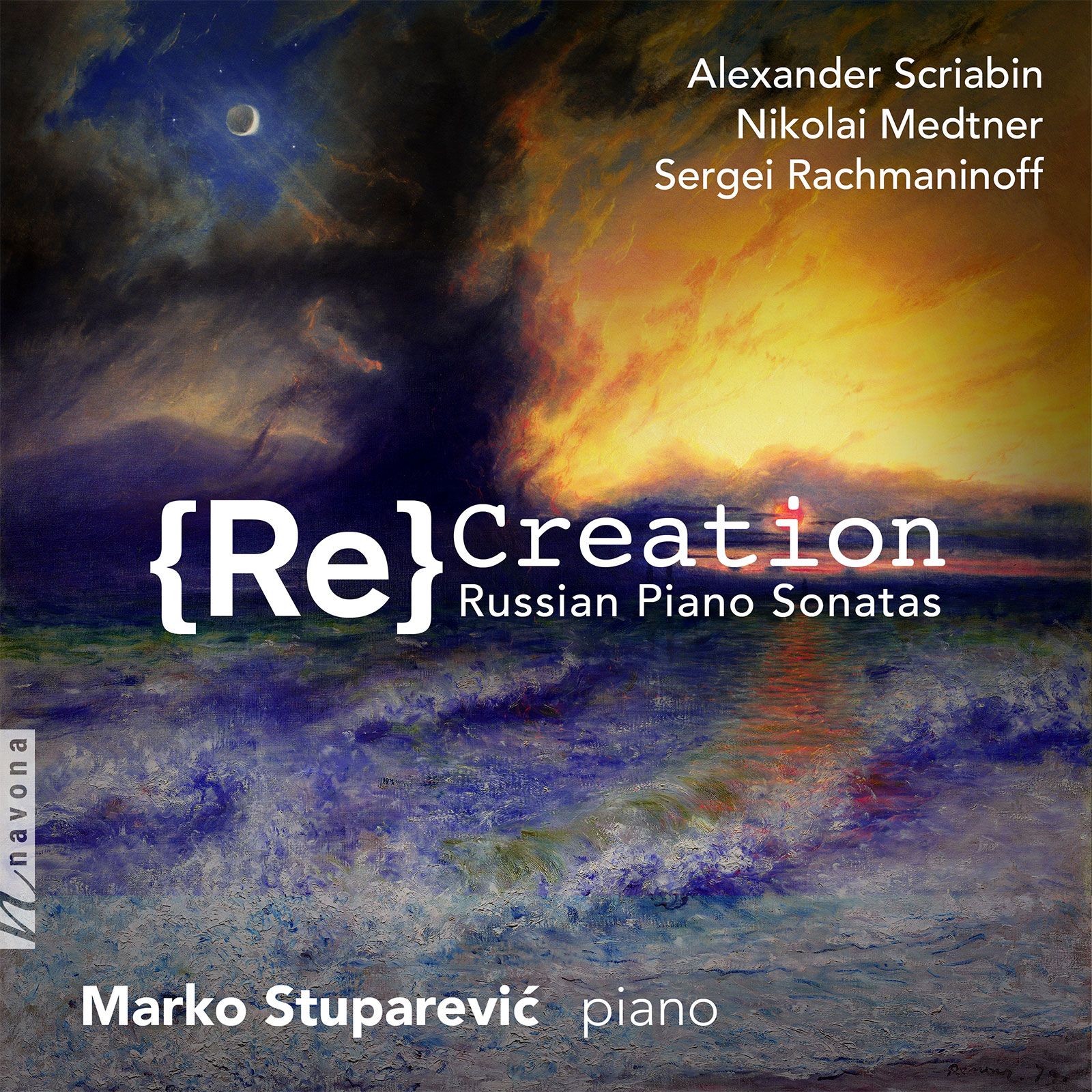 (RE)CREATION from Navona Records and pianist Marko Stuparević is centered on the acts of creation and re-creation, observed through three piano sonatas of three Russian composers: all pianists, contemporaries, and representatives of some of the most notable works of 20th century Russian piano music. Performed by the award-winning pianist, each sonata is rich with advanced compositional techniques and the individual ideologies of their composers, crafted with cyclical forms representing the circle of life. The works of Sergei Rachmaninoff, Alexander Scriabin, and Nikolai Medtner are on full display, born and immortalized into the never-ending life cycle they mirror. 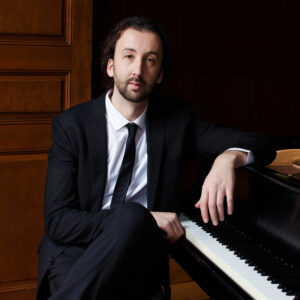 Pianist Dr. Marko Stuparević has appeared in over 500 concerts and festivals over the United States, Israel, France, Serbia, Iceland, Bosnia and Herzegovina, Czech Republic, Bulgaria, Montenegro, and Slovakia as a solo performer and chamber musician. Winning piano competition prizes resulted in many notable solo recitals in the United States and Europe, including Carnegie’s Weill Recital Hall and many other important venues. Stuparević has performed as soloist with Connecticut Valley Symphony Orchestra (under Joseph Hodge), Razgrad Philharmonic (Krasen Ivanov), Symphony Orchestra of the Army House of Serbia (Simone Fermani), National Symphony of Bulgaria (Stanislav Usev), and Foot in the Door Ensemble (Glen Adsit).

This program is based on the ideas of creation and re-creation, observed through three piano sonatas of three Russian composers: all pianists, contemporaries, and friends. Sergei Rachmaninoff’s Sonata No. 2 Op. 36 in B-flat minor, Alexander Scriabin’s Sonata No. 5 Op. 53, and Sonata-Reminiscenza Op. 38 by Nikolai Medtner represent some of the most notable works of 20th century Russian piano music, and the most important works of these composers in the sonata genre.

The act of composition, or even a transcription, is an act of creation, according to Ferruccio Busoni, in his famous Sketch of a New Aesthetic of Music in 1907:

“Every notation is, in itself, the transcription of an abstract idea. The instant the pen seizes it, the idea loses its original form. The very intention to write down the idea, compels a choice of measure and key…Again, the performance of a work is also a transcription, and still, whatever liberties it may take, it can never annihilate the original.”

The same year Busoni published his Sketch (1907), Alexander Scriabin (1871-1915) composed his Sonata No. 5 Op. 53. Although written in a very short period of time, Scriabin considered this “grand poem for piano,” as he called it, his very best composition. The sonata was written at the same time as his orchestral work Poème de L’Extase, Op. 54, at a time when Scriabin was influenced by mysticism and theosophy.

Theosophical doctrines speak of recurring cycles of existence, dispersal, and reinvigoration. His Poem of Ecstasy allowed him to express exactly that — art’s evolutionary process, transcending from its infant, primal state into a “unifying, life-giving force of the world.” These theosophical concepts are shared between works, as well as the literary program he wrote and included in both works:

“I summon you to life, o mysterious forces!
You, drowned in the obscure depths
Of the creative spirit, to your timid
Germ of life, to you I bring audacity!”

The sonata opens with an introduction marked “allegro impetuoso con stravaganza.” The thick chromatic, almost chaotic, texture is followed by fast passages symbolizing the “germ of life.” This motive becomes one of the engines of the work, and is found within the closing passage of the entire sonata, possibly representing a circle of life, rebirth from destructive chaos.

Sonata No. 5 was his first one movement sonata. It does not contain a tonal center, but it is rather built on a tritone relationship, and is in a constant state of emotional flux with unpredictable changes in tonality, rhythm, meter, and tempo, resulting in large buildups and outbursts. His own chord built on fourths — better known as the “mystic” or the “Prometheus chord” — is prominent throughout the piece.

Forgotten Melodies I, Sonata-Reminiscenza Op. 38, No. 1 in A minor

The youngest of the three, Nikolai Medtner (1880-1951) studied with Scriabin’s piano teacher Safonov from the age of 12. Medtner’s best known work Sonata-Reminiscenza was composed in 1917 following the Russian Revolution as his tenth piano sonata. It commences a set (Op. 38) of eight pieces entitled Forgotten Melodies (First Cycle). This single movement is one of Medtner’s most poetic creations and is based on melodies from his childhood. Two cycles followed, published as Op. 39 and 40.

Similarly to Scriabin’s Sonata No. 5, the opening introduction of the Medtner’s work serves as a closing one. Other pieces in Op. 38 include three dances, three canzonas, and a coda alla Reminiscenza, containing variants of the sonata’s opening theme. These eight different melodies are tightly related to each other through material from the introduction or through relationships found within digressions and cadential material. In the development, themes are primarily varied harmonically, resulting in a highly chromatic musical stream that contrasts with the essentially diatonic outer sections of the movement.

Sergei Rachmaninoff (1873-1943) composed Sonata No. 2 in B-flat minor Op. 36 in 1913 at his creative peak. The work came between two of his favorite and most successful opuses: Symphonic Poem The Bells Op. 35 and All-Night Vigil Op 37.

The sonata’s thematic unity and masterful variational procedures of thematic material is rivaled only by his symphonies and piano variations. Progressive harmony, later further developed in the Études-Tableaux Op. 39, displays saturated chromaticism, modality, the use of symmetrical sets, pentatonic, and altered octatonic modes. At the same time, the influence of predecessors like Chopin, Liszt, and Tchaikovsky is still evident. The sonata’s form resembles his Third Piano Concerto, written four years earlier, where the three movements are interconnected with interludes between the movements. By doing this, Rachmaninoff strengthened the cyclical nature of the piece and created a resemblance to a single movement work.

Despite all of these qualities, Rachmaninoff decided to revise the sonata in 1931 after reflecting on his youthful shortcomings, giving it a more direct essence. In comparing the formal structures of the two versions, it is clear that Rachmaninoff decidedly focused on shortening transitional sections and keeping the main themes intact in his 1931 rendition. All of the recomposed sections preserve strong motivic connections with the opening material; some sections strengthen the cyclical nature of the piece. Climax points are organized carefully in the revised version, as the large transitional sections were taken out or rewritten. This procedure reduces the overall number of high points and gives more direction to the thematic material. Some existing dynamic markings were reconsidered in order to serve the new structure. The melodic style, although slightly less “arc shaped” than in his earlier compositions, still presents moments of great beauty in the slow sections.

Russian national elements are presented through the rustic rhythmic pulse of the last movement, and numerous associations with the sounds of bells and Orthodox Christian Church chants. The Dies Irae chant dominates the sonata, as it is so often the case in his other works. However, it appears that the symbolism behind the Dies Irae chant and the bell-like sonorities were more important for Rachmaninoff than their religious backgrounds.